Images vs. No Images in Email Marketing Newsletters: Which Gets Better Results? 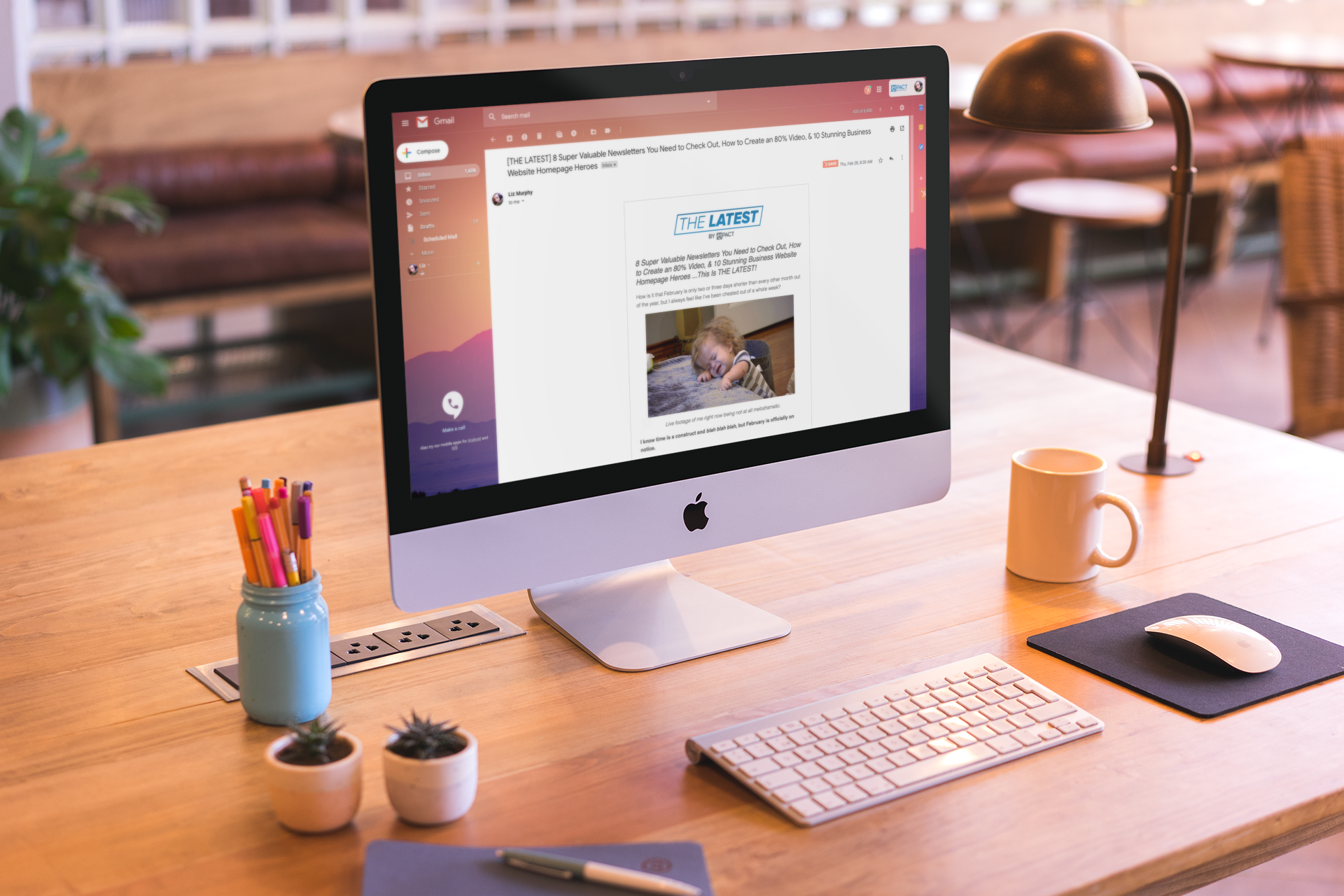 This exact question was the subject of much debate when we first launched THE LATEST -- our thrice-weekly newsletter for digital marketers and business leaders -- last September.

We all had a lot of strong opinions about it -- although they were often conflicting opinions.

Using myself as an example, I know how important images are to creating content that is visually pleasing and engaging. Our article templates in HubSpot require images, and our internal best practice guidance encourages the use of (relevant, purposeful) imagery throughout articles.

On the other hand, I also know my eyes will glaze over when I'm confronted with emails and newsletters that feature tons of images.

On some level, this was the struggle we were all mentally wrestling with.

And if you're asking yourself this question, you're more than likely at the same impasse as we were last fall.

Of course, whether or not you put images in your emails is going to be entirely based on the context of what type of email you're sending, how you're sending it, and who your target audience is.

But since I know personally how annoying an answer of, "Well, it depends," is -- no matter how warranted or factually accurate it may be -- I'm going to share with you exactly what we did to make the decision for ourselves with THE LATEST, as well as some interesting data around visual email vs. more "plain" email performance.

We Decided to A/B Test Images vs. No Images in Emails Instead of "Going with Our Guts"

Our goal with images was to not only enhance the experience of THE LATEST newsletter -- i.e., make it pretty to look at 😘 -- but also increase click-through rates.

For those unfamiliar, we publish tons of articles, podcasts, and videos seven days a week, 365 days per year. THE LATEST is meant to cut through the noise by featuring the most relevant and exciting content we've been publishing, along with other goodies hand-selected by Ramona and myself.

With that in mind, the images in THE LATEST were meant to provide visual context to the articles we were featuring in each issue (three in total), to entice people to click-through and read them. 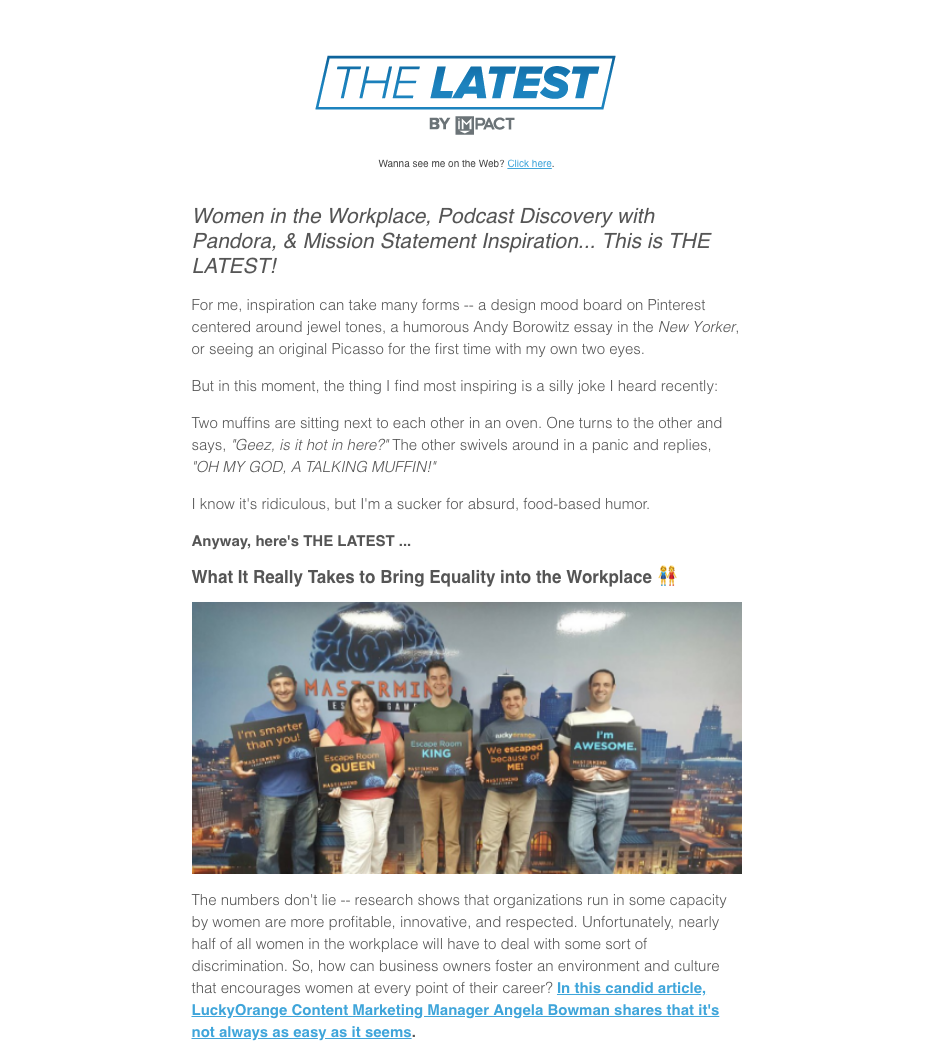 Since we are adamant about using as few stock images as possible at IMPACT in our content, we knew the images had the potential to bring more authentic personality forward from the authors of our articles -- whether they were an IMPACT employee, or one of our amazing outside contributors.

(For example, Angela Bowman from LuckyOrange, whose article on equality in the workplace was featured in the November 13, 2018, issue of THE LATEST shown above!)

Going Into the Test, I Had a Lot of Anti-Image Feelings

I've always viewed myself as a curmudgeon in the world of inbound marketing. For instance, I've spent years dragging my feet about video. Not just as a marketer, either. When I can read or listen to something, I'll choose that over video every single time. (I have no idea why -- I was born this way, baby.)

I've since come around with video, but I have a similar "no nonsense" preference with marketing emails.

My favorite email newsletters have little to no imagery whatsoever, aside from the occasional emojis.👻

For example, I love, love, love getting emails from GatherContent: 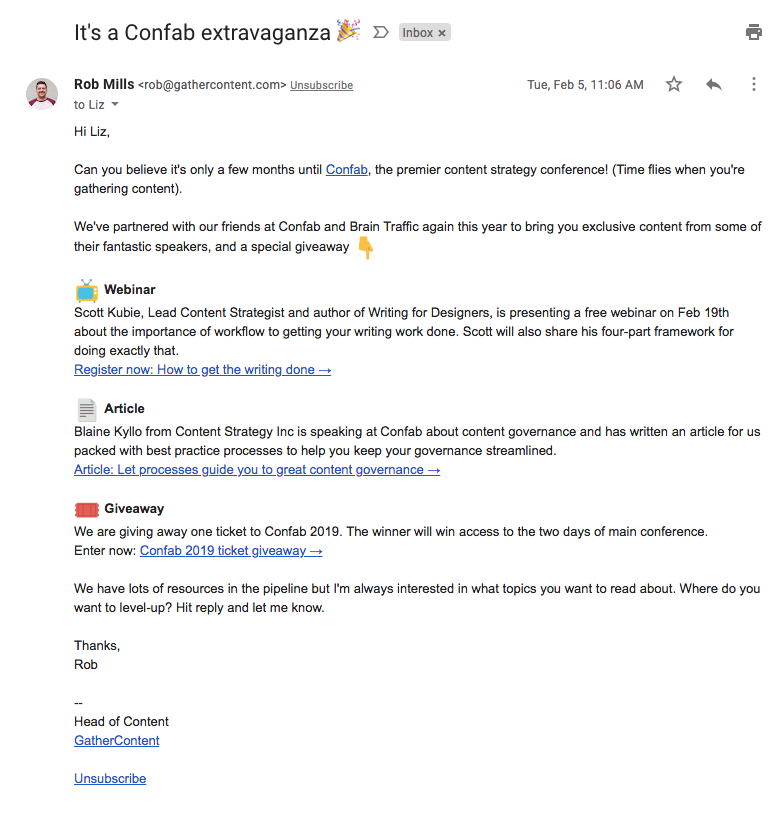 Will you just look at how stunningly simple and beautiful this email from my buddy Rob Mills is? Swoon.

For me, this is the ideal. My job is writing and editing and content coaching and writer's block and... ugh. Yeah, just lots and lots of words.

That means if your newsletter is basically the marketing equivalent of James Joyce's Ulysses with the modern addition of GIFs and stock photography, I regret to inform you that you and I will not be internet best friends.

However, I know there are a lot of people who love images in emails and there are other email newsletters I get that I love that are more visual in nature.

So, I was prepared for the results of our experiments with THE LATEST to show images were the way to go.

If you're a subscriber of THE LATEST, you knew that was coming, right?

Thanks to HubSpot's handy A/B testing option with email, we tested...

...three issues a week, for an entire month.

With the exception of two close calls, virtually every single A/B test came back with a 0.5 to 1.2 percent lift in email click-throughs.

I'll admit, the day we made a full switch to emails without photos or images, I was a little sad. Even though I personally prefer get-to-the-point emails without a lot of fluff, it felt like we were losing something.

But apparently our subscriber base didn't feel like we did something negative -- since making the switch over to no images with the entire subscriber base of THE LATEST, we've seen an overall lift of 4 to 6 percent in click-through rates.

Much like Shakira's hips, the numbers do not lie.

The emojis we use add a little visual flair and personality that still feels conversational. Also, if we do include images now -- e.g. a thumbnail for an occasional video feature, personal photos Ramona and I may opt to include, and so on -- they are more likely to grab someone's attention.

Since we so rarely use images, they stand out and send a message of, "This image is here for a reason."

Other Interesting Stats About "Plain" vs. Image- or Design-Heavy Emails

The debate of images vs. no images in email is rooted in a more broad debate of "plain text vs. HTML emails."

Although it's worth nothing that "plain text" technically refers to emails with no HTML structure at all. So, if you were to include a link, you'd have to do so as a raw URL and not an embedded hyperlink.

In the context of this marketing comparison, however, "plain text" is generally applied as a label to marketing emails that look plain but are, in actuality, an HTML email without all the visual bells and whistles. Like the rich-text emails you can send through Gmail.

Last July, Databox asked a group of marketing leaders their thoughts on plain emails vs. more HTML (see: "design-y") emails, and there were a few recurring themes:

So, while there are broader themes that seem to indicate that more plain emails that give the impression of a more personalized email from an actual human, the data some are reporting is conflicting.

For example, Tammy Duggan-Herd of Content Creators told Databox the HTML version of their biweekly newsletter had a 6.5-percent higher open rate and a 60-percent higher click-through rate.

Whereas HubSpot found that while people say they want more design-y emails, their behavior shows they actually prefer more stripped down emails in their inbox.

So, Should You Use Images in Marketing Emails & Newsletters?

Your answer to that question is going to depend on the following:

Still, just making guesses as to what you should do based on the three criteria above isn't exactly smart. So, I highly recommend you do what we did -- run an images vs. no images A/B test for at least a month.

By the end of that period, your audience will show you exactly what they really want from you. (Even if they're saying the opposite.)

Should you be buying email marketing lists in 2021?