Google announced plans to sunset the average position metric for Google Ads by September of this year.

They reported that as Google Ads has evolved over the years, average position is no longer as valuable at measuring your ad’s true performance, but understandably, the news threw many marketers through a loop.

The good news is, that Google has been rolling out other metrics in the background for Google Ads that “give you a much clearer view of your prominence on the page than average position does.”

However, if your company uses the average position feature, it’s recommended that you take the time to review and reevaluate your reporting, bidding strategies, and any other aspects of campaign management that incorporate the average position metric before the tool sunsets in September.

To help marketers struggling to adapt to these changes, we’ve broken down why the tool was sunsetted and how to best utilize the alternatives Google created below.

Why is Google Sunsetting Average Position?

Simply put, it didn’t measure exactly what it may appear to.

When you’re competing in a Google Ads auction, your ad is assigned an Ad Rank based on your bid amount and your quality score. From there, your ad rank would determine your ad’s average position.

This position referred to the ordering of the paid search results from your auction, not necessarily the location of where your ad is appearing.

So, you could have the #1 position in a given auction, but that didn't mean your ad is necessary #1 in the search results.

Confused? So were many search advertisers.

To best understand how this came to be, let’s dive into a brief history of Google Ads:

Average position was one of the original metrics in Google Ads when they first launched their search advertising product.

At the beginning, Ads were split into two segments:

Over time, Google saw that ads in premium locations were less profitable than ad shown on right-side, so they decided to merge the two ad platforms into one - this is where Ad Rank was born, comprised of the CPC bid and the CTR.

Additionally, to ensure users were getting the most helpful ads shown to them, they also added an additional relevancy factor, so ad’s with the highest Ad Rank would only be shown in search results if they met a particular relevance threshold.

This relevancy criteria meant that if your ad was shown as position #1, the only thing that advertisers could be certain of was that your ad was shown before others in your particular auction. However, it does not say where it was shown - it could be on the right side, or in the search results.

As more updates rolled out, the average position metric became increasingly muddy, and advertisers struggled to untangle what this meant in terms of where their ad was actually located in search results.

“In essence, “average position” should have been named “auction rank” to better reflect its meaning. The word ‘position’ refers to a relative position compared to other advertisers and has nothing to do with a physical position on the page where the ad is shown. Advertisers often care more about where their ad is shown rather than who they were beating in the auction so the average position metric became less meaningful and it’s no surprise it is being sunset by Google.”

The new alternatives and practices being suggested by Google are promising to better provide insight into an advertiser’s actual location on a page and well as their current performance in those areas.

So, what are the other tools? And how should you best utilize them to get the results you need?

Breaking Down the Alternative Tools

In November, Google rolled out several tools to help you better understand how your content was ranking in search results.

Unlike average position, these metrics help you understand where your ads are actually located on search results, not just the order in which they appear.

This can better help marketers understand the number of impressions they’re currently getting vs. what they could be getting if they were at the top, and make more informed bidding decisions to get the best ROI for their efforts. 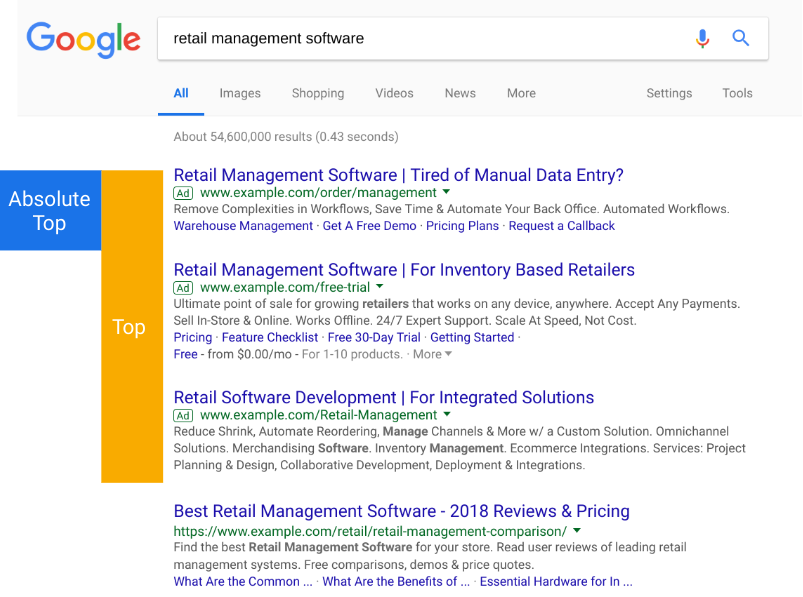 As you can see from the image above, Top Impressions refers to any ad that’s shown above organic search results, while absolute top means it's at the top of those results.

From those, users can view these metrics in a variety of ways as they relate to their ad performance.

Google provides recommendations on the best ways to utilize these metrics when it comes to evaluating your ads, or informing your bidding strategy.

To best understand your ad’s location as they relate to your click-through rate, they suggest looking at these metrics:

However, if you’re looking to set a target for your bidding strategy, Google recommends not using those, as sometimes, bids increase as these numbers decrease.

Instead, look at the following:

How Marketers Can Adapt to the Changes

While it may take some getting used to, most believe the sunsetting of the average position metric will be a positive thing overall for PPC management & reporting.

“Ah, RIP Avg. Position! I am actually ok with this move. I would agree 100% with Google that this will help give a clearer picture of our clients' page positioning performance (or as Google calls it "prominence") overall. Now I can show our clients a % of when Ads are sitting at the very first position vs the % above organic more accurately.  I would recommend that Google Ad managers start auditing and adjusting reports, rules and scripts to reflect the changes sooner than later.”

Clearly, PPC experts believe that the sunsetting of this tool (and the alternatives Google has replaced it with, will actually bring more clarity to PPC reporting, and show how your campaigns are performing more accurately than the average position metric was able to do.

Before the tool officially sunsets, take some time to look at your existing campaigns and strategies.

How often are you using the average position metric to inform your approach?

If you’re someone that frequently uses it, you might want to start exploring these other alternatives and see how they can best take the place of average position, and get comfortable using it.

Also, you’ll want to evaluate any custom reports you may have built that include this metric, and consider swapping it with one of the other ones so it doesn’t skew your results after September.

As discussed above, some of these metrics are better suited for campaign performance, while others provide more forward-thinking insights on the next steps you should take, so be sure you understand those differences.

Overall, this is a step in the right direction. These new features provide much more clarity on what’s actually happening with your ads, rather than just showing the order in which your ads appear.

In time, these changes will definitely allow you to make more data-driven decisions and hopefully, better results.

As with any other changes in the marketing world - lean into them, not against them!