The last time you had a glass of wine at home, did you end up buying something online?

For a large number of alcohol-consuming readers of The Hustle, that was just the case.

Between March 11th - 18th of this year, a total of 2,174 people were surveyed, and a whopping 79% admitted that they have made at least one drunken online purchase in their lifetime. (This may or may not be the reason I own Blu-Ray copies of the first two The Lion King movies…)

Now, before we continue, let’s be clear: please do not take this information as a green light to start marketing to the intoxicated or trying to get your audience drunk -- that’s not the goal of this.

Rather, take this study as further proof that buyer purchases are often motivated by things out of our control and things we may not plan for as marketers.

Let’s take a closer look at some of the findings.

The gender of buyers surveyed by The Hustle was almost split down the middle, with 53% being male, and 47% female.

The survey also revealed that people who make drunk purchases tend to be younger and have an average income of $92,000.

The average age of respondents was 36, and Millennials outranked Baby Boomers by 13%, which might be attributed to the rise of eCommerce. 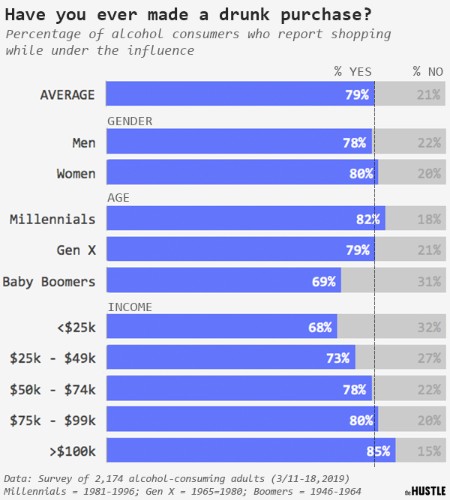 But they got even deeper than that…

Consumers who work in the sports, transport, oil & energy, recruiting, and marketing (yikes) industries are the most likely to shop while under the influence.

More creative industries, like writing, art, and education, are actually the least likely to partake in this type of activity. 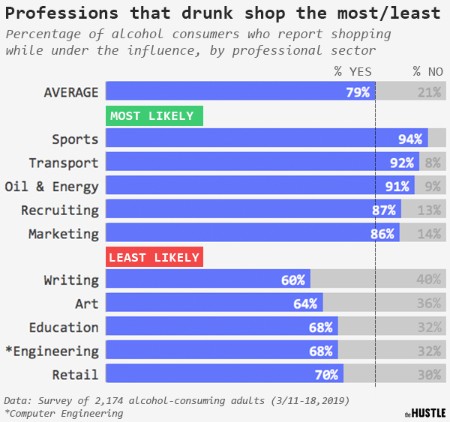 While Amazon takes the cake for being the drunk shopping platform of choice (85% of buyers), people also visit eBay, Etsy, Target, and Walmart to find what they want -- which, by the way, happens to be mostly clothing and shoes, with movies and games being a close second. 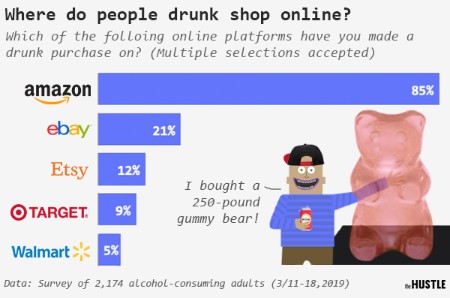 That’s Interesting -- But Why Should Marketers Care?

The people who responded to the survey admitted that eCommerce has made it much more appealing for them to shop while drinking, and a lot of big brands are taking advantage of this.

Because of this, the competition is bigger than ever, which means many online retailers are thinking strategically about how to get in front of their target buyers.

In fact, in response, many online shops have started to activate flash sales at a later time of the day to get in front of the consumer-base when they are most likely to be perusing around Amazon and other websites.

Many are also taking some more general data from the survey and using it in their product marketing strategies.

According to the survey, the average respondent reported spending $444 per year on drunk purchases. So, if approximately 138 million adults in the US consume alcohol, and about 79% of them online shop while under the influence, that makes for a $48.4 billion per year market!

While again, I’m not going to recommend that you begin to market to the drunk consumer-base, I will suggest that you pay close attention to these stats.

Even if you do not actively target individuals under the influence, it’s important to understand these trends and how your competitors might be capitalizing on them in order to plan ahead.

Furthermore, take it as a lesson to continue to learn more about what exactly makes your audience buy, as a whole, and what their behaviors look like. It may not always be what you expect!

What online shoppers want (and how you can provide it) [Infographic]