4 Ways To Differentiate Yourself Using Video in Your Sales Process 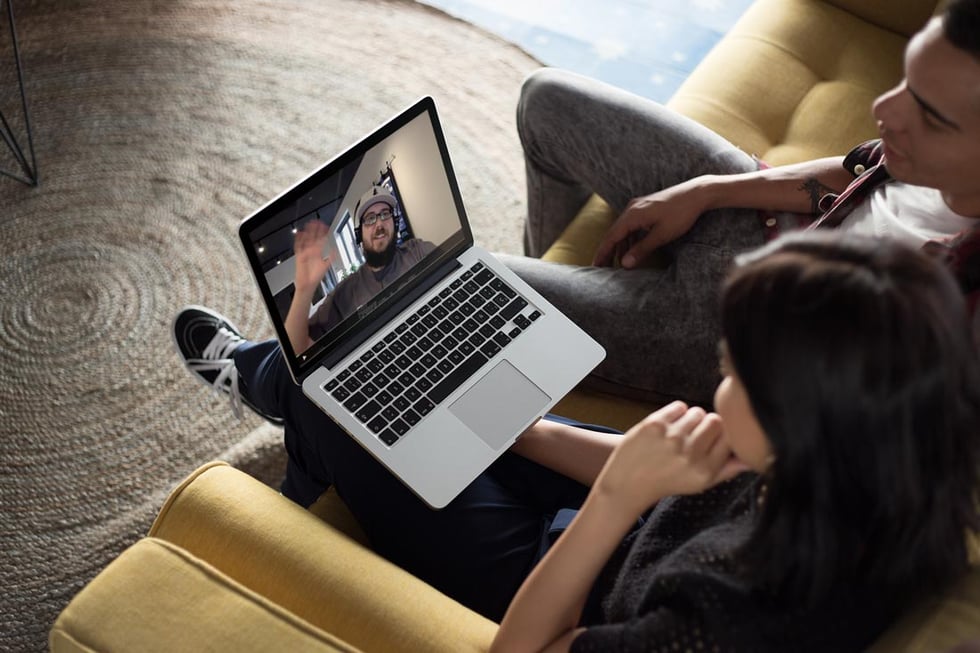 “So… tell me why you’re different.”

This is a statement most salespeople (and marketers) fear.

The truth is... if you’re already hearing this statement, it’s too late.

Early in my sales career, I learned just how hard it can be to identify the differentiating factors of your organization and articulate them in a meaningful way to others.

In fact, it’s something most businesses constantly struggle with and I’d be lying if I said we have it completely figured out even here at IMPACT. (I'll be talking all about this at IMPACT Live this year.)

Salespeople typically react by listing off the three bullet points t they think makes them and the organization they’re representing sound unique compared to the others the prospect is talking with.

But why is it so hard to do well? Does it ever even work?

Why is Differentiation So Hard?

These struggles exist because differentiation is a lot like company culture.

In fact, many times, the latter is used as an example of the former!

“We’re different because we have an amazing company culture. Our core values are X, Y, and Z.”

Have you seen / heard this before? Yes you have.

An organization’s differentiating qualities will not resonate if they’re solely stated out of context, written down somewhere on a web page or an email, or are graphically designed on an interior wall in the office.

In order for differentiation (or culture) to resonate, it must be lived and shown.

One way we’re doing this more at IMPACT is through the use of video.

Below, I’ll be sharing four ways IMPACT uses video during the sales process to create a more memorable, remarkable, and differentiating experience.

But First, Why Video?

Last year at IMPACT Live 2017, I spoke about Bryan Kramer’s concept of Human-to-Human (H2H) Selling and how salespeople need to shift their mindset beyond just B2C or B2B in order to be more effective sellers.

A 30-year engineering veteran at a mid-size manufacturing firm is human.

A busy, “High D” on the DISC chart, executive at a Fortune 1000 financial firm is human.

No matter who you’re talking to on a sales call, that person is human, first and foremost.

This year at IMPACT Live 2018, I’ll be talking about this concept of using video in sales and how it contributes to the most human experience you can have, short of communicating with someone who is standing right next to you.

(Don’t have your ticket yet? Get it here before prices go up!)

The best part is, creating a “human” experience in sales by leveraging video is not something most prospects have become accustomed to yet.

So, this approach in itself is a differentiating factor.

If that’s not convincing enough, according to Cisco, by the year 2019, 80% of the content consumed online will be video-based.

It’s time to pay attention and start embracing it.

Here are four ways to start in your sales process.

The easiest and fastest way to integrate video into your sales process is by ditching the use of telephones with your prospects and adopting a video meeting platform such as Zoom (what we use).

This might seem like a very “101” tactic, but many organizations have yet to rip the proverbial “telephone bandaid” off, so, it’s worth driving this point home.

In fact, I would go so far as to say that salespeople who do NOT leverage video are actually doing a disservice to prospects, and here’s why.

Without video, a salesperson is only able to accurately read one language - the prospect’s voice or tone. The prospect’s expressions and body language are completely left for assumption, and we all know how much can be read from these:

As a salesperson, it is your job to have a complete understanding of the prospect - as a human.

This goes beyond jotting down notes on their service needs, internal challenges, and future goals.

Understanding these “signals” creates the true connection that prospects want (and deserve) to establish prior to making any buying decision, making your conversations more valuable than those had with others, and widening the gap between your company and everyone else.

The “Discovery” or “Exploratory” phase is arguably one of, if not, the most important part of the sales process.

I believe Jill Fratianne, a HubSpot Channel Account Manager, when she says, “The exploratory call is the new closing call.”

These initial calls set the tone and expectations for the rest of the sales process and, when done well, get the prospect excited about continuing the process with you.

At the end of that first call, there’s usually some calendar coordination for when the next meeting will take place, and more often than not, it will be several days out.

Prospects are as busy or busier than us sales folks, and as such, we need to be mindful that they may not be able to remember the minute details of the initial deep-dive call.

In the past, most salespeople have resorted to sending long-form, follow-up emails, detailing everything they can about the meeting and essentially creating a task for the prospect to review 500 words of copy just a few minutes before the next chat.

No one looks forward to doing that, nor is that any sort of remarkable experience for your prospect...

Instead, use a tool like GoVideo by Vidyard to create a personalized, 3-5 minute video recap outlining the most important elements from the previous call, and what they’ll need to know to make the most out of the next call.

Spin up the email using a subject line such as, “[Video] Prospect Company + Your Company: A Recap From Our First Call Together.”

Then, in the first line of the email, let the prospect know that if they do nothing else except watch this video, they and anyone else who watches it will be fully up-to-speed and ready to tackle whatever comes next!

Then drop the trackable GoVideo link into the email just below, and monitor how much of the video your prospect watches.

Boom. You’ve turned what is typically a last-minute todo for the prospect into a helpful, highly engaging experience that they’ll actually look forward to.

When a website visitor decides to fill out a contact form with the intention of talking to a salesperson, a rapid response is the best way to ensure that you connect with them and get the appointment booked.

According to InsideSales, 50% of buyers choose the vendor that responds first and there’s a 10x decrease in your odds of making contact with a lead AFTER the first five minutes.

Clearly, a buyer’s first impression is influenced heavily by how fast an organization can react. However, no matter how fast you pick up the phone, that does not guarantee that you’ll effectively connect with them.

So, how else could a salesperson create a strong first impression without speaking to the prospect directly?

The standard, follow-up process that we’ve adopted over the years has been the tried-and-true “voicemail, then email” sequence with that process repeating over the course of several days until contact is made.

As we look to create a more human-to-human experience for prospects, we’re taking this one step further by including a personalized, video message in place of the standard follow-up email.

Rather than sending the same messages that they’ve read time-and-time again, we’re introducing ourselves and inviting the prospect into a conversation personally “face-to-face.”

Using video allows them to feel like they’ve actually met us even before we’ve spoke. They can hear our voice, see our expressions, and hopefully feel our genuine interest in helping them.

With GoVideo once again, you can record a short, personalized message for the prospect. The tool even allows you to import the video image as a GIF into the email, simulating a short clip of what the prospect is about to click on and watch.

Also, using something like “[Video]” at the beginning of the subject line immediately creates differentiation between your email and the rest as most sales emails can’t promise a visual experience inside.

In the early stages of the sales process, a salesperson may only have access to front-line members of the prospect’s team, but as it progresses to a “presentation” stage, the stakes become higher for everyone involved as they approach a decision-making point.

The second path, which happens more often than not, is certainly the more difficult for a salesperson to follow during the presentation stages as it removes their ability to influence a decision maker directly.

It also introduces a host of communication challenges as the delivery of the presentation must be redelivered from the prospect, to their boss, and potentially to the boss’ boss.

If you’ve ever played the game “telephone,” you know what happens -- the message gets lost in translation.

What might’ve been the best presentation you’ve ever delivered becomes a muddied, out-of-context summary.

So, how does a salesperson ensure their message is delivered accurately, and does not undermine the prospect’s communication abilities?

The solution for salespeople even to this day, has been to create an executive summary.

This would typically be a one-page, written document that serves as the first page of a proposal, or is sent in tandem with a presentation, and outlines some very high-level points about “what’s inside.”

While the concept remains strong, there’s more that salespeople can do to make it more memorable and engaging using video.

But this doesn’t mean simply sending the executive the full 72-minute video recording of the presentation meeting. It will never be watched.

Instead, there are three things that need to happen:

This type of approach ensures accurate delivery of your message, saves time for the prospect, and establishes a personal connection with the executive without having been able to meet them directly. Win, win, win.

I hope as you’ve read this article, you’ve been able to come to the realization that creating differentiation in the eyes of the prospect, is not defined by the three or four unique statements you can make about your own organization.

It’s about creating a delightful or even unexpected experience for the prospect.

At IMPACT, we’ve found that, in place of text-only emails or voice-only phone calls, we can better create these more human-to-human experiences by using video as the medium, and so can you!

Email is not dead. Neither are calls.

They are, however, getting much more difficult to garner the attention of people with, given the number of terribly unhelpful and annoying attempts most people receive on a daily basis.

Video and tools like GoVideo make creating a more delightful, unique sales experience easier than ever before.

During my talk at IMPACT Live 2018, I’ll dive deeper into how we’re using video to do this and more at IMPACT. I hope to see you there!

How to run a revenue team meeting (+example agendas)

MQL vs. SQL: What's the difference and do they still matter?

Marcus Sheridan: 'Virtual sales can work in any industry'