Welcome back to another exciting week! If you're in the United States like me, I have a feeling that your to-do list ahead of the July 4th holiday weekend is probably somewhat daunting.

So, to prepare you for the week that is, let's take a look back at the week that was – that way you can make smarter decisions faster. Here are the big digital marketing news stories and expert tidbits you may have missed:

Also, after more than a year of waiting, F9 was finally released, and hands-down, it was the magical experience I always hoped it would be. I mean (spoiler alert) a Pontiac Fiero in space?! Swoon.

Anyway, let's get into it.

Cookie Monster ... Cookiegeddon ... whatever you want to call it ... Google's decision to block third-party cookies as part of its Privacy Sandbox initiative to create a more open and private web has been lurking menacingly in the wings ever since it was announced.

You see, lots of website owners, advertisers and publishers rely on third-party cookies for visitor tracking, ad serving, retargeting, and other personalization tactics. The problem is that Google and other privacy advocates say third-party cookies are a little too good at tracking website visitors and harvesting their data – and most people aren't even aware it's happening or how much data they're giving away.

Originally, this block was slated to begin rollout in 2022. However, last week it broke that Google has delayed the block until 2023.

Google shared the reason as time for more "responsible planning," but reporting suggests regulatory issues (particularly in the U.K.) is to blame for the hold-up. Although I don't think a lot of website owners and publishers are complaining, as innovative replacements to what third-party cookies were able to deliver have yet to materialize.

Moreover, I realized this week that many people don't clearly understand if they're even impacted by this news – not everyone is.

2. Instagram teases it may allow posting from desktop (via TechCrunch)

Social media marketers have been wishing for years that Instagram would allow posting from desktop computers. Those prayers have potentially been answered, according to folks who have noticed Instagram testing desktop posting in the wild: 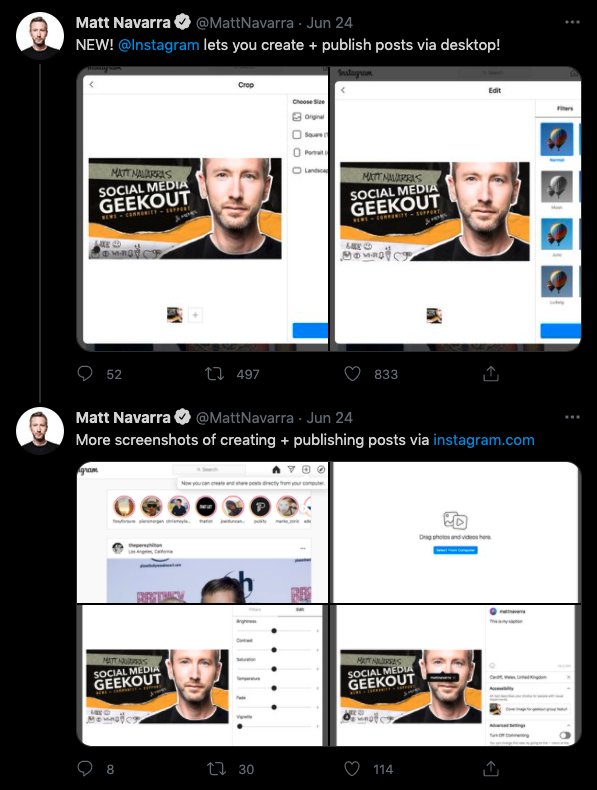 Instagram then confirmed to TechCrunch it was testing with this statement:

Interestingly enough, the reason Instagram finally began testing this option is because it saw a rise of use on desktop during the pandemic.

I'm a total sucker for dense research reports, and The Evolving Customer Experience: Perspectives from the Industry report Facebook just dropped is no exception. Although the report itself is geared more toward e-commerce companies, there are broad, data-backed insights we can all learn from.

Here were a few of my favorite highlights:

Finally, here are a few quotes that stood out to me from surveyed experts:

“Discovery will be more important than ever. COVID-19 shifted consumers’ willingness to be monogamous to brands, and they are now expecting to discover new products and services. Relevancy, purchase friction and creative quality will be paramount to winning.” (Omar Zayat)

“To meet consumers’ expectations, the way brands manage data and consumers’ preferences around data will need to evolve. This means providing customers with full transparency and control so they both understand how their data is used and can express their preferences.” (Graham Mudd)

“Transforming an industry isn’t easy. To remain relevant, brands need to embrace how changes in consumer behavior are providing an opportunity to do everything differently and better, and ruthlessly stop legacy practices that no longer meet consumer needs.” (Sophie Neary)

It was only two weeks ago when Google announced the Google Analytics changes they were rolling out were the bee's knees:

“The goal of these new features is to help marketers fill the gaps of those who opt-out of being tracked and to help advertisers access the most data that they need more quickly while recognizing that those data points vary from business to business."

Unfortunately, according to reporting from Search Engine Journal, promises made are not translating into promises kept:

"Twitter has been on a low boil for weeks as many users across the search marketing world expressed their extreme displeasure with Google Analytics 4 (GA4).  While there are some positive comments, the many negative comments come from search marketing professionals who one would expect to be brand ambassadors of GA4 and not their most passionate critics."

The primary complaint is that Google Analytics 4 is now impossible to use. Moreover, it seems to cater more toward the enterprise-level user rather than small businesses.

One user stated that she wondered how committed to small businesses Google really was, because this update had brought her to the verge of tears:

These are only two of the many, many very negative public responses and complaints to the Google Analytics 4 rollout. Although one can hope Google will weigh in shortly and make things right, we'll have to wait and see.

5. Finally, the post-pandemic remote work debate is intensifying (via Digiday)

This time last year, a friend of mine told me during a socially distanced hangout that there was a good chance this would go into the fall, and he had zero plans to return to the office before the new year.

My heart sank into the pit of my stomach, and I genuinely felt ill. The idea of only being at the start of such an isolating, life-shattering ordeal was horrifying.

Many, many months later, "normal" is slowly creeping back into our everyday lives. But after so much time spent wishing for "normal," it would seem – at least when it comes to work – things have changed, and our desires around how our work fits in our lives has evolved:

Of course, even though large numbers of employees around the world see the value of remote working options (along with a few big employers), not every company is on-board.

In fact, the rhetoric around this specific issue is getting quite tense:

“Morgan Stanley’s chief executive James Gorman suggested that employees who work remotely and in locations outside big cities like New York could not expect to earn New York salaries. As he was quoted as saying: 'None of this, "I’m in Colorado … and getting paid like I’m sitting in New York City." Sorry, that doesn’t work.'”

Some posit, however, that these companies are "on the wrong side of history" as remote work is a "permanent civilization shift."

Right or wrong, we're currently in a "buyer's market" for jobs, where employees hold the power. More than that, the data shows that flexible working options are quickly becoming a non-negotiable:

"In a recent survey of 8,800 frontline employees, office workers and business leaders by Fuze, a Boston-based cloud communications and collaboration platform, 75% of respondents saw flexible work as a must-have, not some special benefit, with 65% saying they would consider changing jobs for greater long-term flexibility."

Before business leaders start panicking, however, keep in mind that not all employees want the same thing. The key here is flexibility ...

“In its survey, Fuze found that 20% of respondents want to return to the office full-time, while another 20% would prefer to work fully remote and 60% lean toward a hybrid setup. 'This fear that everyone wants to remain 100% remote is just not true,' Walker said.”