If you’ve ever driven through farm country in the midwest, you’ve undoubtedly seen scores of pole barns. Pole barns, also known as post-frame buildings, have been a staple in the agricultural industry for decades.

In recent years, with innovations in construction materials and designs, the popularity of pole barns in both commercial and residential contexts has exploded.

On the commercial side, pole barn construction is being used for strip malls, storage buildings, warehouses, car dealerships, and municipal buildings.

For residential, people are turning to pole barns for an affordable option for detached garages, hobby shops, tool sheds, and vehicle storage.

And with the rise in popularity of pole barns, a slew of construction companies are now making an effort to specialize in erecting these types of buildings.

FBi Buildings is a local, family-owned business in Remington, Indiana, that has been at the forefront of midwest pole barn construction since it was founded in 1958 by Edwin Bahler, Sr.

Over the years, FBi Buildings has expanded to servicing close to 150 counties across four states: Indiana, Illinois, Iowa, and Michigan.

As competition in the post-frame industry began to build, FBi Buildings knew they had to do something different to remain competitive and keep lead generation up.

FBi Buildings realized they needed to start reaching new prospects, and the best way to get new leads was through digital marketing efforts.

“In our transformation to digital marketing, we stumbled, we lost our way,” admits CEO Ed Bahler.

“What used to be the strength of the company – our lead generation effort – really became a liability. When you can’t ensure a consistent lead flow, it creates a vulnerability that affects everybody.”

In 2014, FBi Buildings realized it was time to change up their marketing strategy and improve their digital footprint.

Kurt Bahler, the grandson of Edwin Bahler and son of Ed Bahler, took it upon himself to lead his family business’ marketing department. However, Kurt had moved over from working several years in sales and wasn’t as adroit in marketing.

“My son had been in sales for three years,” Ed shared. “He knew the customer base, but he had no experience in marketing. So I thought, ‘Can we bring in an outside entity to mentor and develop him?’”

Once Kurt took the reins of running FBi’s marketing department, he went to work finding the right company to help him own his new position.

“During our first meeting, they told us, “We think you need to be focusing on content. And more specifically, They Ask, You Answer questions.” said Angie Dobson, Marketing Project Manager.

🔎 Related: What Is They Ask, You Answer?

A major initial focus during consulting was improving the quality of their written content.

In No Time, They Started Seeing Results

In December 2018, typically a slow time of the year for the business, monthly organic traffic grew 61% and monthly leads grew 53%.

And in typical They Ask, You Answer fashion, their most important pieces of content were those addressing pricing and financing for pole barns.

“A lot of the questions we got from customers were, ‘Do you guys offer pole barn financing?’” said Angie. “So we wrote about it. And that’s our highest performing blog at over 11,000 views — 19,000 as of writing this case study. It was published less than a year ago and it’s on the first page of Google with a featured snippet.”

The team at FBi Buildings credits their use of tools like HubSpot with their digital marketing success.

From hosting their blog, landing pages, and emails on HubSpot’s CMS, to teaching their sales team to use HubSpot’s CRM, FBi Buildings uses HubSpot as a single destination for aligning their marketing and sales goals.

“I use HubSpot daily to review multiple reports,”  said Angie, “First thing in the morning, I like to see how many deals we ended up with from the day before. Then I look at blog views to see what our top viewed articles are and how much revenue can be attributed to those blogs.

“The last time I checked, our pole barn financing article had generated $20,000 in revenue for us.”

With a healthy blog, helpful videos, and an optimized website generating tons of monthly traffic (over 50,000 per month), the FBi Buildings team is ecstatic over the number of leads and deals they’re generating from their inbound marketing strategies.

One aspect of HubSpot the marketing team is particularly fond of is being able to see new deals come in and work backward to review the customer’s journey; to see all of the touchpoints and interactions that a person made along the way.

Angie shared a fascinating story highlighting how one of their They Ask, You Answer goals for 2020 (using more video content) is having a direct impact on revenue. They’re able to attribute the use of videos by tracking customer touchpoints in HubSpot.

Early in 2020, FBi Buildings traveled to one of their steel suppliers to shoot a steel comparison video showcasing the differences between the steel FBi uses vs some of their other major competitors.

“We knew we had to do more to show our customers how our products differ from everyone else,” Angie said, “This is a huge differentiator for us because none of our competitors have content like this.”

In January, shortly after wrapping up the steel comparison video, a prospect, Mr. Young, converted on an email campaign offering a discount for select projects. Mr. Young reached out to FBi Buildings requesting they construct a post frame building for him.

For the next few weeks, Mr. Young communicated with FBi’s sales team going over the building he had drafted with their design tools.

Mr. Young was eager to move forward on the deal, but there was just one problem: Mr. Young’s wife, Mrs. Young, was not so convinced because FBi’s quote was $11,000 higher than a competitor’s bid.

The deal looked like it was going to fall apart.

Mr. Young had been frequenting FBi’s website as far back as July 2018 and had visited their site 18 times and viewed 69 pages of their website over the course of 18 months.

He spent a lot of time bouncing back and forth from their Design Your Own Pole Barn page to their Project Gallery page; looking for inspiration and fine-tuning his dream pole barn.

He had also been heavily engaged with their email marketing, opening 15 of the 17 sent.

After 18 months of building trust, Mr. Young was sold on FBi Buildings; Mrs. Young, however, wanted to know why she should choose FBi, when another contractor was cheaper.

FBi salesman Jim Terry knew that if Mrs. Young saw their brand new steel comparison video, it would answer why FBi’s bid was higher than the other competitor.

“She watched the steel comparison video,” Angie said, “and a few days later,

Jim sold the project to the Youngs. We honestly believe if we didn’t have this video, we would have lost the sale.”

And that’s just one example of the amazing work that FBi Buildings has been doing over the past two years. Their dedication to creating helpful, relevant content for their prospects that answer the most pressing questions people have about pole barns has helped catapult FBi to the top of their industry.

"From a revenue standpoint, we’ve seen a $5 million turn around in profit.”

For businesses struggling with their own digital marketing, Ed Bahler shared his advice: 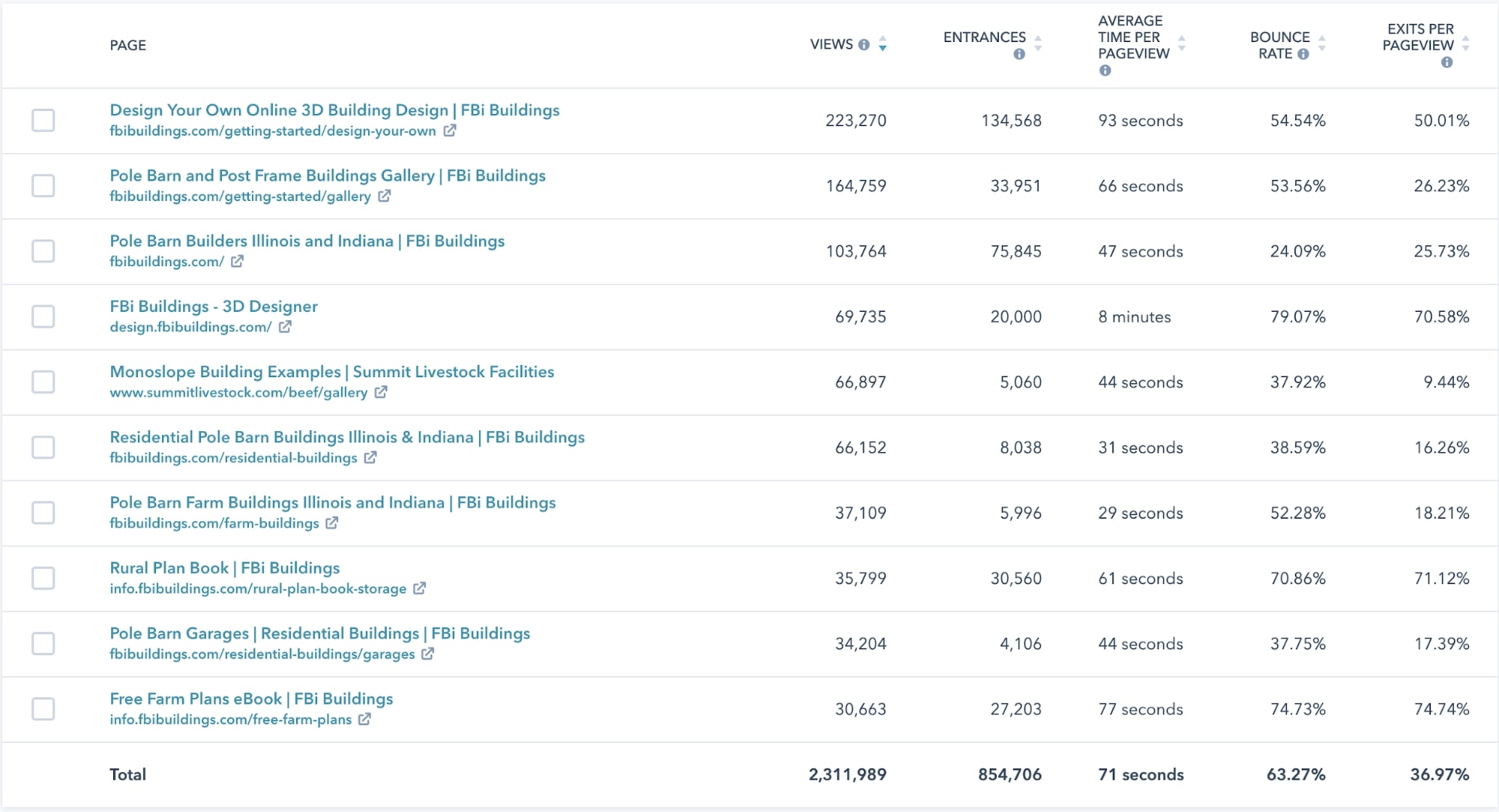