What is the best time to send marketing emails in 2020?

No, wait — I should send it at 10:30 in the morning so they will see it after they’ve made their way through their inboxes already. That way, it won’t get lost in the clutter.

But wait, tomorrow’s Friday, and Monday is a holiday — people might be too focused on the weekend to even notice, then it will get buried by the start of next week.

So go the mental musings of every modern-day email marketer trying to reach out to a list of potential customers.

All of them are wondering the exact same things: When should I schedule my email to go out? Which day of the week is best? And, if every other business is following the same strategy, does that render moot any supposed “best” time?

Before starting my research on this topic, I surveyed a few dozen colleagues here at IMPACT.

We’re a pretty savvy bunch of marketers and digital professionals, so I thought our instincts would ring true.

Well, according to my coworkers’ survey responses, the best time to send an email is Tuesday at 7:00 am, with Monday at 10:30 coming in second-place.

The opinion of an expert

To get a first-hand opinion from an email expert, I sat down with Stephanie Baiocchi, IMPACT’s director of community and events.

Before we began, I asked her to tell me how many individual emails our company has sent in the last 365 days.

Considering our thrice-weekly newsletter, THE LATEST,  goes out to tens of thousands of people, Stephanie came up with a pretty accurate estimate, which she quickly backed up with the actual statistic: 2,907,151.

I asked Stephanie what she would say if she were to forced her to answer, what is the best time to send emails.

Her answer: Tuesdays between 11-1, in the time zone of the recipient. (To note, there are programs that will deliver the same email to different inboxes based on local time zones. Stephanie recommends Seventh Sense.)

Now the answer that Stephanie wanted to give to my question was “it depends.”

I let her explain.

“First of all, it depends on the purpose of the email. When I invite people to the HubSpot user groups, that's going to be different than if I want someone to read something and engage with it, like our newsletter, or the community updates that I send.”

“It also depends, frankly, on how fun [an email] is. I'm way more willing to send something fun in the afternoon, and I am going to prioritize sending something business-focused early on the day.”

The fact is, the best time to send an email will depend heavily on your needs.

Stephanie noted the malicious brilliance of pizza companies, who send out coupons and other promotional coupons right around 4:15 in the afternoon. 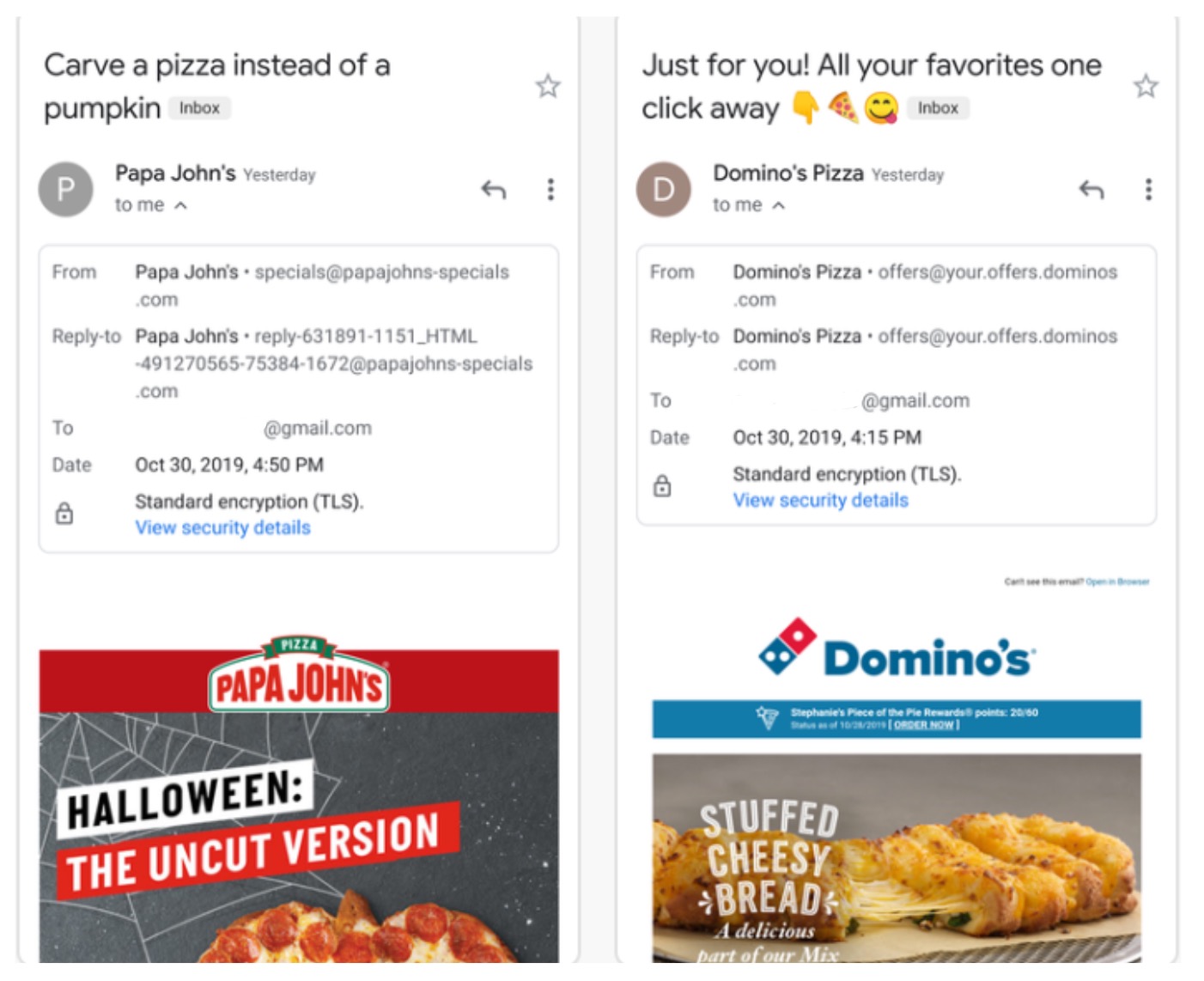 Just when you’re starting to think about dinner, in comes an offer from Papa John’s or Domino's.

Then, on Sundays in the fall, they’ll send out coupons at 11:30, just as people are getting ready to watch NFL games.

If that’s not knowing your customer, I don’t know what is.

Similarly, marketing emails for other types of products or services might be best tied to certain hours or days of the week.

When would you want to hear about a weekend event? When would you prefer to learn about a shoe sale? When are you most likely to open an email offering a free preview of a streaming service?

It all comes back to thinking like a customer.

According to data, when is the best time to send an email?

According to research done by the Radicati Group — a marketing research firm headquartered in Palo Alto, California — over half the world’s population uses email.

The number of email users “is expected to grow to over 4.3 billion by the end of 2023” and currently, over 293 billion “business and consumer emails [are] sent and received per day.”

This translates to a whole lot of crowded inboxes, a few billion frustrated users, and an extremely congested marketplace.

Thankfully, all these emails create an inexhaustible amount of data, and researchers continually mine this data to uncover insights.

HubSpot, which analyzed over 20 million emails over a 10-month period, found that Tuesday is, in fact, the best day to send.

To push further, HubSpot also looked at open rates based on time of day. According to the data, open rates peak at 11 am.

Now, this doesn’t necessarily mean that the emails being opened at 11 am were sent at 11 am. They could have been sent at 10:59 — or much earlier.

Campaign Monitor researched the same question and came up with a slightly more nuanced answer than HubSpot’s “Tuesday at 11 am.”

Accordingly, they found that email open rates are not as closely tied to business hours as HubSpot suggests.

In fact, just slightly more than half (53%) of email opens happen during the business day, with the next biggest share (24%) happening between 6 pm and 11 pm.

Not surprisingly, Campaign Monitor found that the majority of these off-hour opens “occur on mobile devices.”

Think about it, you might be in line for your morning coffee, or on the couch watching TV at night. You check your phone and see a notification from your email app. Smartphones have made checking email on-the-go easier than ever, and they have, in turn, extended email’s reach.

Still, Campaign Monitor did find that there was a "best" time for emails to be opened, but it was later in the day, peaking at 3 pm.

Also, note how this curve is less steep than HubSpot’s above: 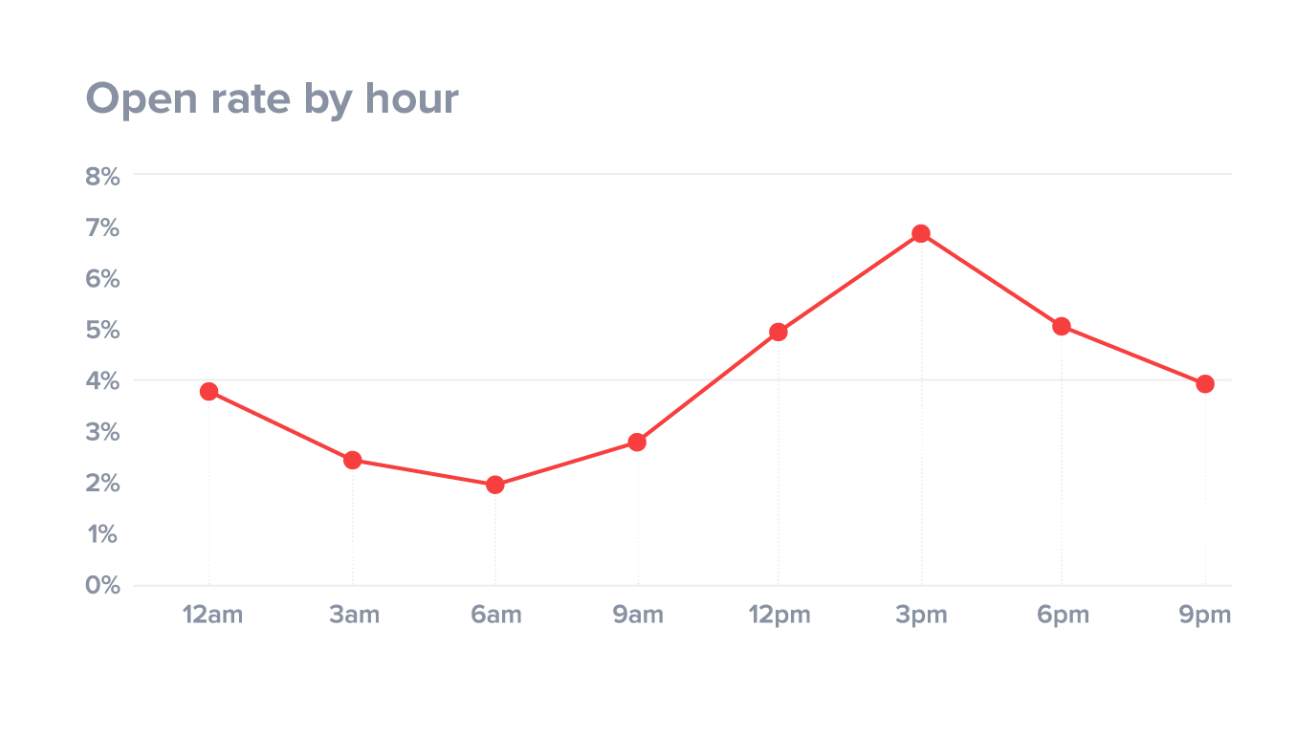 As time goes by and email use continues to skew toward mobile, expect to see the lines of these email open graphs soften.

When Campaign Monitor compared more recent data to data from 2013, they found an increase in email opens happening before and after typical work hours.

So, the majority of opened emails do get opened during the business day (and not first thing in the morning), but there is plenty of activity after hours as well — at least according to most studies.

With so many users opting to open email on mobile devices, senders must make sure their emails are responsive to different screen sizes. While you cannot perfectly predict what device a recipient will use, mobile use swells during “off-hours.”

It is also important to remember that open rates are dynamic.

While it’s true that most emails that will be opened are opened soon after receipt, some people leave messages unread (rather than deleting them) to come back to later. So, make sure to give your emails 24-48 hours before you really look at metrics like open rate and click-though-rate. These can creep up over time.

What is the average open rate and click-through rate of a marketing email?

When we scrutinize the effectiveness of email marketing, the primary metrics we consider are the open rate and the click-through rate.

We’ve written elsewhere about what marketers can do to increase engagement, from crafting effective subject lines to how to best use images, but everything begins with an email being opened.

Mailchimp, a company that sends billions of emails per month for over a million clients, dug into the question of average open rate to produce and share specific insights.

From all of its data, Mailchimp calculated the average email open rate as 20.8%.

In other words, for every 100 emails delivered, about 20 get opened.

Keep in mind that open rate is calculated based only on delivered emails, so if an email “hard-bounces” because an address is invalid, it doesn’t factor in.

Knowing this, in order to deliver those 100 emails, a marketer might attempt to send 110, with 10% hard bouncing.

While some industries trended higher (like government, at 26.5%) and some trended lower (like, ahem, marketing and advertising at 16.4%), these extremes more or less defined the range of average open rates.

SuperOffice, using a different data set and publishing its report in September, concluded a slightly higher average open rate, finding “the average open rate for email continues to improve year over year – albeit slowly – reaching 24.88% in 2018.”

According to Mailchimp, the average click-through rate is 2.6%.

In other words, only a very small percentage of your audience is likely to click on an offer or CTA within your email.

For a general introduction to all measurable email data, start with this primer on the subject.

How to send the best email possible

All of this data and expertise can serve as a good way to start testing what works best for you. There is no perfect answer as to when to send your emails. But, there are many things to keep in mind about how to send the best emails possible.

The fact is this: Although when you send your email is crucial, so too is how you write and compose your email. In other words, don’t just think about the when — also keep in mind the what and the why.

You should be truly interested in adding value to your customers’ lives and helping to ease pain points when they need it. If you’re not, then perfect timing will mean little.

As supplementary material that should be required reading for anyone sending marketing emails, I would recommend reading Jen Barrell’s helpful piece about avoiding 11 common email marketing mistakes.

Although we haven’t addressed it here, database hygiene is vital to any good email marketing campaign. Consider this sponsored post from Insycle (whom we use) explaining the dangers of duplicate data or this interview with Stephanie about keeping your database clean.

And, more than anything else, you can study your own data to perfect your technique. As an email marketer, you should be A/B testing and analyzing data frequently.

Although there might not be a simple answer that will tell you the best time to send marketing emails, look at the data, both from your own efforts and larger researchers, and think like a customer.

How To Create Email Marketing Templates

How does the rise of dark mode impact your email marketing templates? (+ examples)

8 email newsletter mistakes that are killing your click-through rates

Business communications in the coronavirus (COVID-19) era: dos and don’ts

According to a new report, Mailchimp owns 60% of the email market

What is the average email open rate?