Facebook News may disrupt industry norms for publishers and marketers

Facebook is launching Facebook News, which will give users “more control over the stories they see, and the ability to explore a wider range of their news interests, directly within the Facebook app.” With the focus being on the individual user, Facebook News is looking to change the way news is distributed and consumed. 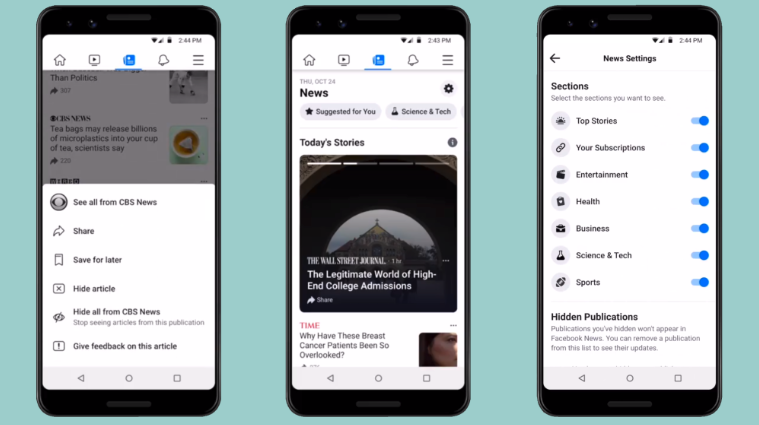 For a news source to be published on Facebook News, Facebook will require publishers to become verified in its News Page Index. This verification process has a number of qualifications that must be met, including authenticity.

The News Page Index continues Facebook’s efforts to combat fake news on the platform. For example, Facebook will be revamping its misinformation labeling system, which shows if articles, images, or videos have been scanned and identified as false by Facebook’s fact-checker assessment.

Facebook News aims to provide a customized news experience for each user. In a world obsessed with individualized experiences, Facebook is reimagining how users find their news by putting multiple publishers into one personalized feed.

Adding News to Facebook will likely keep users on the platform longer. According to a report by Activate Inc., Facebook has seen a shocking 26% decrease in usage since 2017. Since users will now have access to their news on Facebook, this will allow them to find, consume, and discuss the news all in one place.

Businesses and advertisers will benefit as well. Advertising on Facebook is significantly cheaper than print media or a publisher’s website such as The Wall Street Journal or The New York Times. It also offers more targeted advertising based on its algorithm. Ads found in Facebook News articles will be customizable to the individual user, allowing advertisers to invest in the users they want to connect with, not just the publisher.

Facebook’s track record for curating news is anything but spotless. Its previous tool, Trending News, was riddled with accusations of biased selections of content based on editor recommendations rather than the Facebook algorithm.

Given the scrutiny Facebook has been under, it shouldn’t be a surprise that there are concerns about Facebook News. Although using the Facebook algorithm to personalize content should eliminate the bias found during the use of Trending News, Facebook still has significant power over what sources get verified. Even with the News Page Index in place, certain audiences, especially in the current political climate, are likely to accuse Facebook of favoring certain news publishers over others.

Publishers have also voiced concerns regarding Facebook News. Since users will be consuming news on Facebook rather than a publisher’s website, there is a fear that the monetization of ads or subscriptions publishers currently receive would now be going to Facebook instead.

To counteract this possible revenue loss, Facebook has signed multiple agreements with publishers to ensure there is proper recognition and compensation for publishing their content.

According to the Wall Street Journal, Facebook executives are willing to pay up to $3 million per year to publishers in order to source headlines and articles.

It would be safe to argue that the timing of Facebook News being launched is not a coincidence. With the 2020 presidential election ramping up, Facebook News is sure to be a major player (good or bad) in the discussion.

While Facebook News is still new, it should be abundantly clear that it is already stirring things up in the news space. It will be interesting to see how users respond to Facebook’s shift from a news sharing platform into a news publisher of its own.