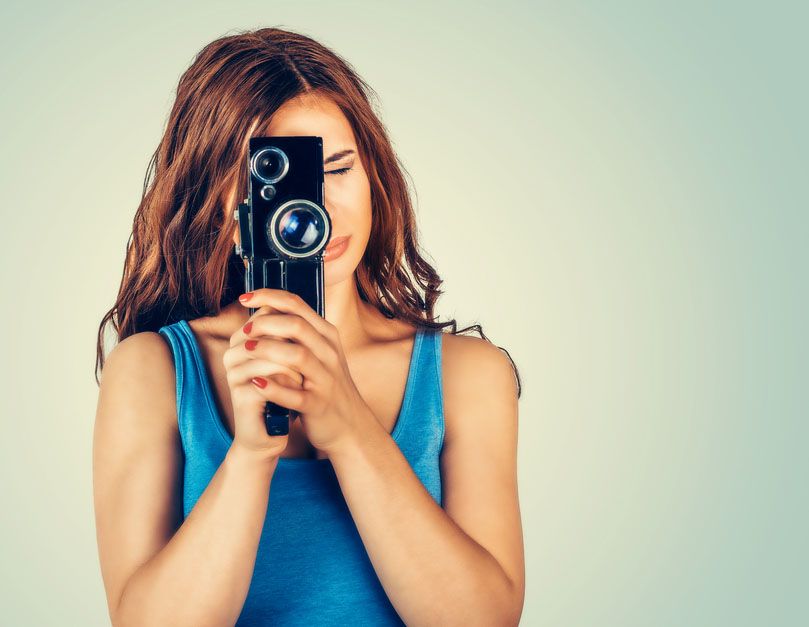 Running through its aisles hunting for just the right movie, praying that a copy of the latest two-day, new release was still waiting on the shelves...

Back in the 90s, consumer access to video content was pretty much limited to just TV and VHS tapes so this was really the beginning of my love affair with it.

Flash forward 20 years and judging by the overwhelming popularity of both professional and amateur video content today, it's clear I wasn't the only one.

Although we don't think it's going to replace traditional blogging anytime soon, video content is in high demand among consumers and has proven to be very effective in reaching them, even for B2B marketers.

Businesses using video grow revenue 49% faster year over year than organizations that don't, but that doesn't mean any old clip will do.

The quality of your video content matters. You won't attract very many B2B customers with a shaky video recorded on your iPhone with bad audio and poor lighting, but a high-quality production can communicate more information and create a more lasting impression than any written content alone ever could.

Here are 13 awesome examples to learn from and perhaps even use to get ready for your own close-up.

GoToWebinar uses storytelling to engage the viewer and get them interested in the company, in this case, study. In it, you get to see exactly how the product is used in the real world and the benefits it delivers in just two quick minutes.

In this video, (reminiscent of Direct TV's "Get Rid of Cable" commercials), Taulia lists the benefits of its Supply Chain Management services while still keeping the video light and entertaining. Its humorous approach in a traditionally "boring" B2B niche, helps humanize the company's brand and make it stand out.

In this playful approach to a tutorial video, MethodCRM employs an enthusiastic and animated narrator instead of the standard monotone we often hear in most.

The company creates a realistic, relatable situation, by staging the tutorial as a conversation; more specifically, a call to their helpdesk. This clever spin on a how-to engages the viewer by telling a story rather than lecturing and addressing a common pain point head-on.


Though lower in production value than many others on our list, this example from Deloitte works because it enlists real team employees, not actors to deliver its message. This not only gives a friendly, down-to-earth face to the large organization, but it helps the content feel more relatable and easy to understand.

With this video, Oracle tells the story of 'Modern Mark.' It's suspenseful music and epic narration helps pull the viewer in and makes its buyer persona feel like they can be the "hero" of their own story by working with Oracle.

Now, in this case study video, HubSpot gives prospective B2B buyers a first-hand look into the office of Shopify, a well-known company that has succeeded using its products. The video highlights specific wins and includes friendly interviews with real-life HubSpot employees and users from Shopify to add authenticity. Overall, this example is well-produced and adds eye-catching social proof to the HubSpot name.

Ever wonder what happens when a shopping cart is abandoned in the wild? That's the question VeriSign sets out to answer in this quirky video (which is also my favorite on the list).

Filmed as a "mockumentary," this example follows VeriSign's fictional character, Liberty Fillmore, as he tries to save and help abandoned shopping carts he finds in empty lots, streets, etc. He envisions a world with "no more abandoned carts" and that's just what VeriSign will help your business achieve as well.

One of our longest examples, Cisco delivers an educational segment similar to something you'd see on FOXNEWS or CNN. Using a casual backdrop, approachable host, and conversational tone, Cisco makes an often intimidating and technical subject more tangible for general audiences.

Focusing on a specific buyer persona (game designers), this case study video from Intel does an excellent job of highlighting how its machines offer solutions to common pain points and deliver superior performance to their competitors. By using real-life interviews similar to HubSpot and GoToMeeting, the company adds credibility to its claims and show viewers exactly what its products are like in action.

Taking more of a traditional commercial route, SAP discusses common persona pain points and inspires you to simplify your life using its product. Similar to Oracle, this video aims to position the company as a helpful catalyst in success, while still allowing the customer to be the hero of the story.

A free full-length webinar, this example from GetResponse focuses on educating its viewers, not selling. In the video, the company not only shares valuable industry insights, but it also brings in a respected influencer to catch its persona's attention and build its own credibility.

Next, in the example above, Jones uses a section from a past recorded presentation to create a short video suitable for sharing and viewing online. This is a great example of how brands can repurpose content even in video marketing. This kind of video lets you capitalize on the power of the medium, while saving time and effort and even generating interest in your speaking engagements.

Last, but not least, this example from LinkedIn acts as both an educational webinar and a results-packed case study.  Running just under an hour long, there's a great balance between educating the viewer and promoting LinkedIn's marketing solutions.