Yes, I know, I’m lumping a lot of people together with the title of this post but for the most part, it’s true, at least symbolically, as the “C student” is crushing the “A student” online every day, which begs the question—Why?

About a year ago the subject of this article started percolating in my head. I’d just received an email from Lewis Howes—the kind he sends out to his list—and within the email there was a typo.

As I saw this typo, I literally chuckled out loud, not because I'm pretty  skilled at typos myself, but mainly because it was so very symbolic of Lewis and almost every single other ultra-successful online business (individual brand or  larger company) I’d witnessed in the digital realm since I actively joined it in 2009.

You see, this wasn’t the first time I’d received an email with a typo from Lewis. Nope, there had been others, and despite the fact that Lewis may not have had a professional editor reviewing his stuff, nor managed to garner a “perfect score” on his writing exam, the guy was absolutely, and still is to this day, crushing it.

And why was he crushing it? Simple, he was in almost every way an example of the following list, a list of qualities that I keep seeing again and again and again with the greatest online marketers and businesses in the world today.

1. C-Students Hustle: Surprisingly, I’ve seen the word “hustle” frowned up by some folks in recent years, almost as if it was a crude method whereby to attain some measure of success. I think such thoughts are a total crock. In fact, “hustle” is more underrated today than it has ever been, and I’d take it over genius brains any day of the week.

Hustlers are relentless. They push and push, without ceasing. Gary Vaynerchuk was one of the first that brought “hustle” to the forefront of the online world but many have since followed, Ryan Hanley (Insurance Industry) and Danielle Vasta (Pet Sitting Industry) come to mind here,  bringing “hard work” to a whole, new level.

2. C-Students don’t stay within the lines: Creativity is the name of the game in the online world. Whereas the A-student often needs a checklist and a nice, step-by-step guide to complete tasks, the C-student looks to clear their own path and blaze a new trail. Sure, sometimes the trail blows up in their face, but it’s also what creates new discoveries mixed with greatness.

3. C-Students don’t care how daddy did it: This may sound mean, but “the way Daddy did it” has killed more business and marketing success stories than one could possibly count. In a digital age where change is traveling faster than the Earth itself, Daddy’s way often doesn’t pay the bills. (See Kmart) 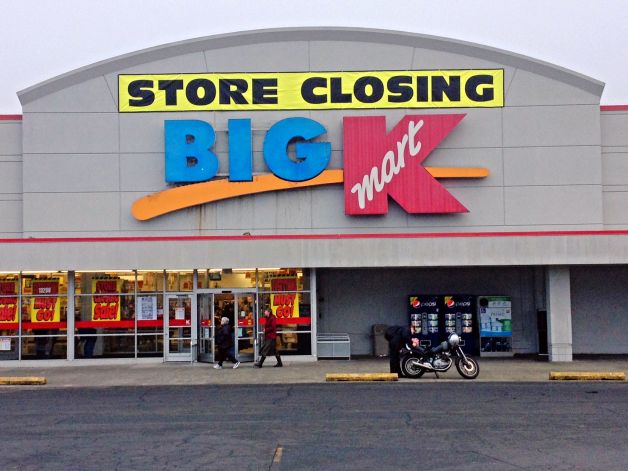 Kmart is a great example of a company that simply didn't embrace change, costing them greatly in the long run.

4. C-Students don’t hold their finger in the air to check what direction the wind is blowing: That’s right, they don’t, mainly because they don’t care. If they have a gut feeling, they often go with it, and watch the results later.

5. C-Students don’t care if everything is just right: Not too long ago I had a client that delayed the start of their blog for weeks simply because they didn’t like the shade of green on their blog’s home page. (Seriously, I’m not kidding.) Needless to say, that client has yet to experience much success online.

At the reverse end of this, over the past 6 months I’ve been working with a company called Ongoing Operations, led by an incredible leader in Kirk Drake. Some of you may remember how Kirk managed to produce over 100 blog posts in less than 5 hours, but more importantly, the whole reason why Kirk exploded out the gate when he embraced content marketing was because he accepted the fact he and his employees weren’t necessarily perfect writers, but nothwithstanding,  was willing to take the steps to simply “get better.”

When it comes down to it, there is no such thing as “just right” or perfect online.

Your writing style will never be right.

And your business will certainly never be just right.

Embrace imperfection. Run with it and fix on the fly, it’s the stuff every champion is made of.

6. C-Students aren’t afraid to get a bad grade: For some folks, the word “fail” is debilitating. For others, it holds little significance, as there is always the next test, the next opportunity, or the next project. Although I doubt he was an actual C-student, Seth Godin speaks much of this principle with all of his words. We all see the man as a genius, yet many of his projects have been complete “failures.” Despite this, he keeps creating his own type of art, no matter what the critics say.

7. C-Students understand not everything will be their best work: I’m amused with much of the ongoing quality vs. quantity debate online. These days, many folks want to be a “quality judge” and talk down the idea of doing anything less than a 10 out of 10. Again, I think this is a crock.

There is a time to create great video.

There is a time to create average video.

There is a time to write pillar blog posts with hours of research.

There is a time to slap something together in 20 minutes.

There is a time to tweet about what you ate for dinner.

On a personal level, I’ve had amazing results with all of the above, and am mystified by anyone who would make an individual or company feel inferior just because their content didn’t fall into the mythical “amazing” category that is frankly so relative that it doesn’t exist in the first place.

I want to again state that I'm not saying with this post that all A Students don't have some of the above qualities. Obviously, there are a million exceptions, but hopefully you get my point.

That being said, I'm curious to know what qualities would you add to the list? What have been some of your experiences with what I mentioned above? As always, I'd love to hear your thoughts.