6 ways to get the most out of HubSpot Campaigns

The word “campaign” in the marketing world can mean so many different things, and each individual marketing tool you’re using likely has a different definition for the term.

As a HubSpot user, you’re probably already using the Campaigns tool — after all, HubSpot is constantly suggesting you tag your emails, blog articles, and other marketing assets with them.

But other than giving you a way to keep track of the different collateral you’ve created, what are those things actually useful for? What’s their value?

I’m here to tell you that HubSpot Campaigns is one of the most under-utilized tools in the HubSpot Marketing Hub, especially considering their power in measuring how your marketing efforts are actually influencing real-life revenue for your business.

Plus, with the recently-released Marketing Tasks feature in Campaigns you can now not only track your marketing campaigns in HubSpot, but you can also plan out and manage your execution of them.

So if you’re not on the HubSpot Campaigns bandwagon yet, get ready to hop on! In this article, I’m going to break down six different ways you can make sure you’re getting the most out of this tool. Let’s go!

Note: This article is just a small taste of a full-length lesson I created in IMPACT+ called HubSpotter’s Guide to Campaigns and Campaign Analytics. This lesson is FREE so make sure to check it out after you're done or even queue it up now to follow along!

1. Know what can be a part of a Campaign

This might sound elementary, and while it certainly is simple, it’s important. HubSpot Campaigns are a way to tag your marketing assets as a part of a specific initiative so you can track what contacts are influenced by it.

The following assets can be tagged with HubSpot Campaigns:

It’s important to know what can and can’t be a part of a campaign so you can know what data is available to you.

When a website visitor or contact interacts with one of these tagged assets, HubSpot collects this data and aggregates it for you in the Campaigns tools so you can see how all of the different assets are performing:

As you scroll through the Performance tab in an individual campaign, you’ll be able to see the performance of each individual asset you’ve tagged.

Ultimately as a marketer, you want to be able to show that the marketing activities you’re executing are doing something – generating engagement, traffic, contacts, revenue, etc.

As you plan out your overarching marketing campaigns, use your knowledge of what you can tag with a HubSpot Campaign to make sure you’re capturing all of the juicy campaign data on all of your different campaign assets.

2. Consider carefully which assets you tag

Once you’ve got the basics of HubSpot Campaigns down, ask yourself, “am I tagging the right assets?”

There are a few nuances to how HubSpot measures a campaign’s “influence,” or impact on closed business.

Here’s a quick breakdown of how all of the tagged assets in the section above can “influence” a contact:

See the full breakdown of how contacts and sessions are “influenced” by Campaigns here.

This will help you understand the data that you’re looking at on your Campaign Performance page and in the Campaign Analytics tool.

Here’s an example of a tagging mistake I made myself, and have seen many others make as well:

You decide to create an automated email nurturing campaign for your top-of-the-funnel contacts coming into HubSpot. You create several emails that you tag with your “Awesome Email Nurture” campaign, and then you create a workflow to deliver those emails over the course of several weeks.

When you go into your workflow settings, you see that you can tag your workflow with a Campaign as well. Great! It’s part of your campaign, so you tag it.

After your nurture campaign has been running for several months and you’ve enrolled 500 people in it, you jump into your Campaign Analytics tool to see how this awesome nurture campaign is influencing your contacts.

Wait a second — it’s saying that you have 500 influenced contacts, but you know that not everyone that went through your workflow actually engaged with those emails you sent.

Not only is it showing that everyone was influenced, it’s also showing that there are influenced deals for that campaign. But how do you know that those deals were influenced by people actually engaging with the content of your awesome nurture emails? Unfortunately, you don’t.

In hindsight, you realize that tagging your workflow with your Campaign actually muddied the data you wanted to see because what you really wanted to see was people who opened and engaged with your emails, not just people who received them.

In most cases, you want to be able to clearly say “this marketing thing I did had an impact on our contacts and deals,” but if you aren’t careful with how you tag things (as the story above illustrates), you’ll end up having to wade through analytics that don’t tell the real story.

3. Create and use a consistent naming structure

The longer you use HubSpot, and the more marketing campaigns you run with the platform, the more Campaigns you’ll likely create.

The problem is, if you’re not specific and strategic with how you name your Campaigns, things can get really disorganized and hard to navigate really fast.

I think you see where I’m going.

Get as specific and descriptive as possible when naming your Campaigns. This will not only make them easier for you and your team to find, but it’ll also make it easier to aggregate Campaign data with the Campaign Analytics tool.

Consider using both dates, platforms, and mediums among other keywords for your campaign names, and designate if the campaign is one-time or ongoing. Your list of campaigns with your consistent naming convention could look something like this:

When using Campaign Analytics (more on this in the next section), you can search for keywords in your Campaigns names and select multiple Campaigns to show in your analytics report.

A great, consistent naming structure on the front end will make a huge difference when reporting on the back end. 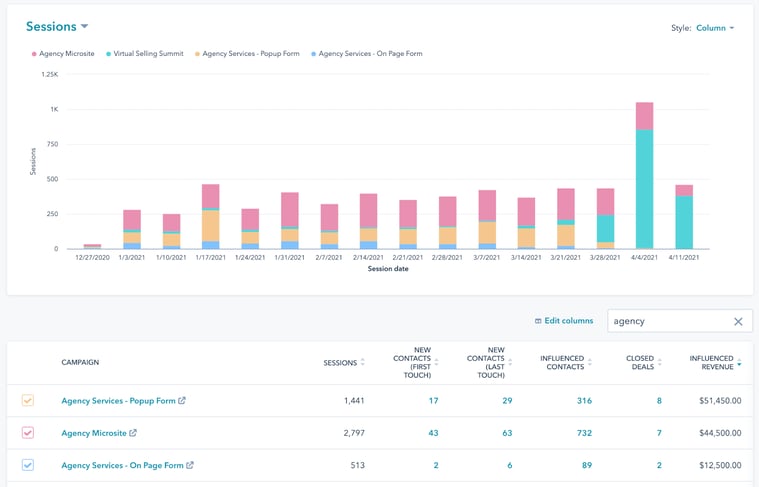 4. Tag your assets before you launch them

As soon as you start putting together your assets, create your Campaign and tag them!

Here’s why: HubSpot Campaigns only collect data after you’ve tagged an asset with them. So if you’ve already sent an email, published a landing page, etc., and haven’t tagged those assets with a HubSpot Campaign, tagging them now won’t pull in any data or activity that’s already happened.

The majority of the activity worth tracking will have already occurred.

And while you can’t go back in time (although after reading this you may wish you could), you can use this opportunity to make sure you’re tracking all of your campaigns from here on out.

It’s that simple — just tag it!

5. Get to know the “hidden” Analytics tool

You’ve tagged your assets and have been running your marketing campaigns, but how do you know it actually did anything?

For real - this is one of my favorite tools for marketers who want to show that their marketing efforts are helping drive revenue for the company (more on that in the next section), but because of where it’s located in the platform, many users don’t know it exists!

If you’re on those people who didn’t know it existed, you can find it in your portal by opening the Reports dropdown in the main navigation, selecting Analytics Tools from the dropdown and then finding the Campaign Analytics block on the Analytics Tools page.

While you have access to some analytics and performance data when viewing the Campaign Details page of an individual campaign, the Campaign Analytics tool is what allows you to evaluate your campaigns against each other, and see how your campaigns are influencing closed revenue.

The Campaign Analytics tool also shows you how many sessions, contacts, and deals were influenced by a Campaign over a specified period of time for every single one.

With this information, you can clearly show how the marketing activities and initiatives you’re doing are impacting real contacts and real deals, ultimately resulting in real dollars for your business.

And without it, you’ll be left wondering if the campaigns you’re running were actually worth the time and resources you invested into them.

Want to know more about the HubSpot Campaign Analytics tool? Check out our free lesson in IMPACT+!

6. Get revenue data into HubSpot Deals

If you looked at that Campaign Analytics tool screenshot and thought, how the heck are they showing influenced deals and revenue??, it’s because we use HubSpot’s Deals tool to track our revenue at IMPACT.

Having closed-won deals associated with our contacts in HubSpot means the analytics tool can directly connect our tagged marketing activities to that revenue. In other words, it can clearly and definitively tell us that this asset and effort lead to money.

If your team is already using Deals to track sales and move new business into a Closed Won deal stage, you won’t have to do anything to get this data to show up (HubSpot simply looks at influenced contacts who have closed-won deals associated with them after they’ve been influenced).

But what if you’re not using HubSpot deals?

Don’t worry. If you can bring your closed-won deal data into HubSpot, you can still see influenced deals and revenue.

Depending on your volume of deals, and where you deal data lives, the complexity of this process will vary. If you have a small volume of deals over time, you can simply manually create deals on the deal board and associate them with the appropriate contact.

If you have a larger volume of deals that would be too cumbersome to manually create, you can do a multiple-object import with deals and their associated contacts.

If you’re looking to manually create deals or import them, check out this course in IMPACT+.

It’s go time! You’ve got everything you need to jump into your HubSpot portal and start getting more out of the Campaigns tool.

Know what you can tag with a campaign, consider which assets you really want to be tagging, use a consistent naming structure, tag before you launch, and use those Campaign Analytics and deals to prove that what you’re doing is really working (or learn from it if not!).

There’s a lot more I want to tell you about HubSpot Campaigns and Campaign Analytics, but it would probably be better if I just showed you.

That’s why I created the HubSpotter’s Guide to Campaigns and Campaign Analytics lesson in IMPACT+.

Need a HubSpot Specialist? Here’s How to Find and Hire the Right Candidate

Is Your Inbound Marketing Working? Track These 4 Metrics to Evaluate Your Progress