In our first article in this series, we walked you through how to plan out your next campaign in order to run it successfully in HubSpot. If you haven’t read it, I highly recommend you start there!

Once you have created the strategy for your campaign and decided what the main goal is, it is time to start adding everything into HubSpot.

Adding your campaign to HubSpot correctly is crucial in order to make sure that you will be tracking campaign engagement and influence properly. This ensures you’re able to prove the returns on your campaign investment.

Creating your campaign in HubSpot

You first want to create a campaign so you can start attributing new contacts and deals you close.

In order to do this, you must create a campaign and associate all assets created for this campaign.

In HubSpot, head on over to campaigns to begin.

Edit the budget for this campaign, and add any notes that may be applicable. Noting the budget here will help the team understand the exact return on the campaign.

Add your goals. This may include the type of website engagement you want to achieve and influenced revenue from leads.

Remember, it is important to create the actual campaign in HubSpot using the campaign tool before you have published anything. This is a common issue we see at IMPACT with our clients. You need to make sure you get all of the data from your campaign in HubSpot from the start to see the entire return. 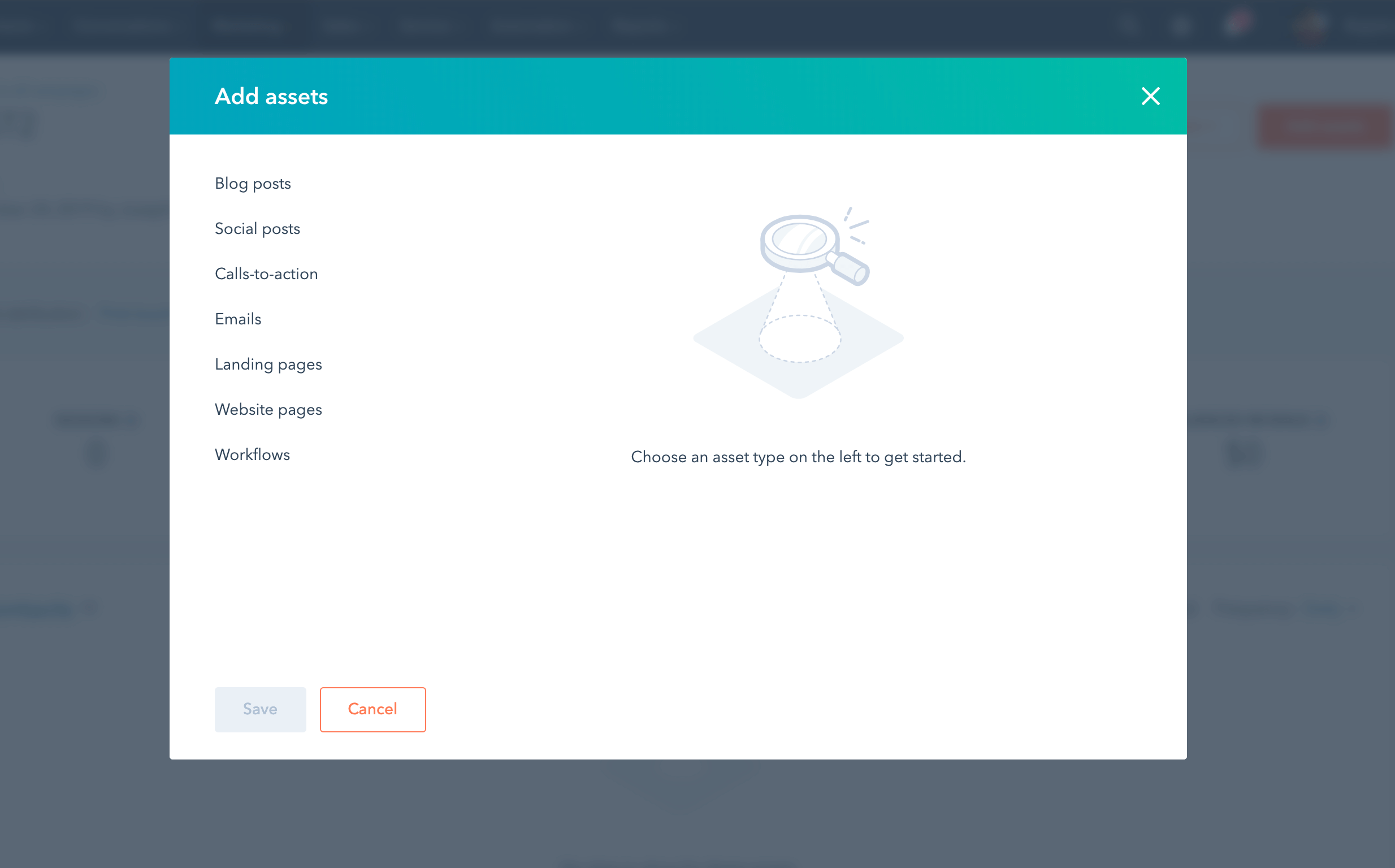 Once you have your campaign created, it is time to start getting all of your assets in HubSpot. It is very important to make sure all the assets you have created get associated to the campaign. You can do this at the campaign level once each asset is created in the campaign tool. You are also able to associate an asset in the asset tool. For example, when creating an email, you will be able to associate that email to a campaign in the email settings.

Assets that can be associated:

Create a form that you want to use in order to capture your leads. Keep in mind what part of the funnel this form is in. This can help dictate the type of information you ask for.

For example, if this campaign is meant to capture leads that are more top of the funnel, you might not want to ask for information like a phone number or address. At this point in the buyer’s journey, contacts might not feel comfortable sharing. However, if this is a bottom of the funnel form and your sales team needs to know the location of the prospect before they talk to them, it is fine to ask in your form.

Creating your landing page and blogs

Based on the campaign, you might want to create some landing pages in HubSpot. Many times you will have multiple pages for your campaign including pages and thank you pages.

Associate all of your landing pages that you have created to the campaign when you are done. Any CTAs created for the landing page should be attributed to the campaign if they are campaign-specific. Keep in mind that assets can’t be associated to more than one campaign. If you are using a CTA for many campaigns, it might make sense to not associate it with any single campaign

This is the same with blogs. If you are specifically creating blogs for a campaign, you will want to add these to the campaign. However, if the blogs will be used for many campaigns, it might make sense to not associate them to a specific campaign.

Once you have completed your form and landing pages, you are now ready to start with email communication. Create all emails that are needed for your campaign.

Just like landing pages, any CTAs here should be attributed to the campaign if they are campaign-specific.

Once you have the emails, you can then create your workflow. The complexity of this workflow is determined by what you are trying to accomplish.

You should keep in mind that you can assign multiple workflows to any one campaign. This means you can have both nurturing workflows and follow-ups, if needed.

Make sure to keep in mind the workflow’s goal and set this up in HubSpot. HubSpot will help you gauge the success of a specific workflow by giving you a workflow conversion rate.

Another HubSpot tool that can help attribute activity to a campaign is its custom tracking URL builder. This lets you build a URL to use outside of HubSpot.

The great part about this tool is that you are able to associate the URL with one of your campaigns in HubSpot. This makes it easy to create custom tracking URLs for the right campaign.

Finally, in order to really get the most out of your campaign in HubSpot, you need to make sure you are tracking your deals and associating revenue to these deals.

Many times we see companies running campaigns without associating any deals to those campaigns. One of the most important reasons to use the campaign tool is to be able to attribute revenue back to a specific campaign in order to see the value of that campaign and overall return. 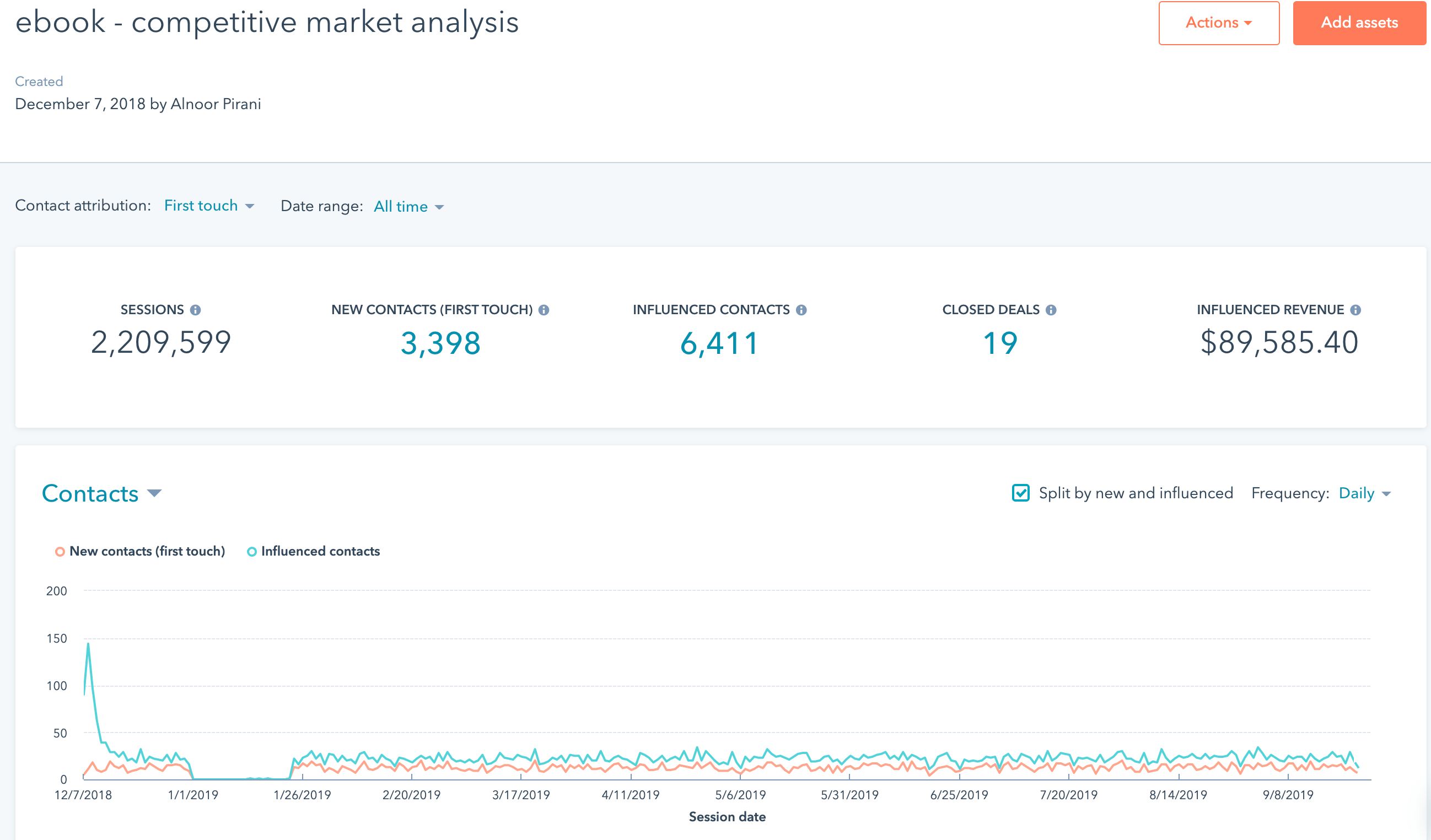 Creating deals and having contacts associated with the deal that have been influenced by the campaign is how HubSpot will add a revenue number to the campaign reporting.

It can be difficult to see which part of a campaign specifically led to a conversion because of how HubSpot attributes revenue.

If you want to track attribution from a specific channel, it might make sense to create separate campaigns for each type of channel or asset.

If at any point you want to look at the campaign as a whole, it is easier to aggregate all the different campaign data than to separate each type of asset and the revenue it is influencing.

Once you have completed these steps, you have successfully added your campaign to HubSpot in a way that allows you to track your ROI!

Now you can see how your campaign performs. In the next article, we will look at how to best analyze and report on your campaign to see how effective it is.