4 Famous Psychology Experiments & How They Relate to Inbound Marketing 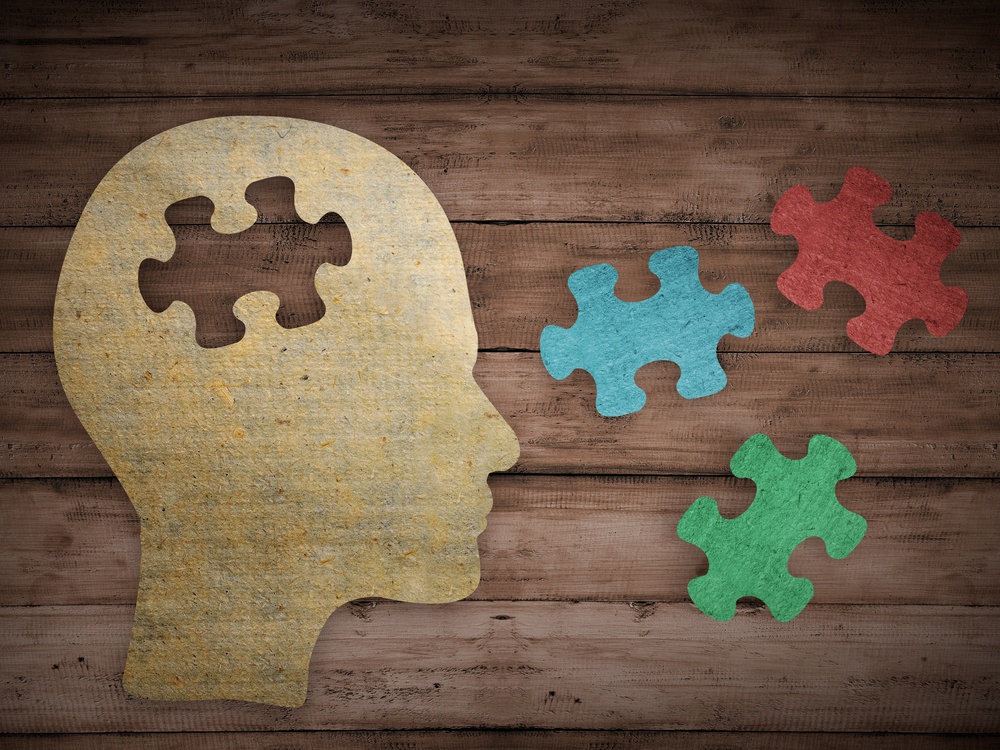 My love of marketing runs deep, and it has always been evident, but my first love will always be psychology. Most people don’t know (not even my own colleagues) that I have a Bachelor of Science in Psychology, and when they find out, they usually ask me if I’ve been secretly reading their minds.

Newsflash: that’s not how psychology works. Psychic readings, perhaps, but not psychology. It involves the study of the human mind and behavior, aiming to find a deeper understanding of why people think and act the way they do, by applying general principles and conducting innovative research experiments.

Although psychology and marketing are two completely different industries, you’d be surprised by how many similarities there actually are. And that’s why I love my job.

In an effort to showcase just how closely related they are, I’ve summarized four famous psychology experiments and how I believe you could (and should) apply them to your marketing efforts.

This famous social experiment involved the simple task of matching line lengths. Watch the video below for a short demonstration.

Problem & Goal: Solomon Asch wanted to conduct an experiment that would allow him to better understand the effect that social pressure from a majority group has on a person’s likeliness to conform.

Hypothesis: Asch hypothesized that the majority of people would not conform to something that was obviously incorrect.

Procedure: Asch conducted the experiment with 50 male college students. During each round, he put one naive student -- who was told he was taking part in a visual perception test -- in a room with seven informed students (they knew what their agreed-upon responses would be beforehand).

Each person had to say out loud which comparison line (A, B, or C) matched the original line’s length. With the answer always being extremely obvious, the seven informed participants would always state the same answer whether it was correct or incorrect, and the naive participant would state his answer last. There were 18 total trials, and the informed participants gave the incorrect answer 12 times.

Think about things that you do to support how great of a company you are.

You collect customer testimonials, strive for good reviews and ratings, and send out satisfaction surveys. You may also pay close attention to your analytics so you can produce positive statistics and quantitative facts that show how much your company has helped others. You probably even have your customers’ logos neatly placed on your website.

You do all of this in hope that this "social proof" will convince your prospects to "conform" and follow the lead of these other companies.

Solomon Asch’s experiment supports this idea. According to it, people are likely to conform to the thoughts of others, especially if they are widespread and have a lot of support.

So keeping showing the world that people love you, and let them speak for your company through great testimonials and reviews.

The Halo Effect is an interesting concept. It’s a type of cognitive bias towards a certain person or people, affecting the way we perceive them. For example, if you see a person as nice and likable, you may also think of them as successful and intelligent.

Problem & Goal: Nisbett and Wilson simply wanted to find out if people are aware of the Halo Effect concept or not.

Hypothesis: They both thought that people would have little to no awareness of the Halo Effect. They also hypothesized that it influences personal judgment and thoughts when it comes to viewing others.

Procedure: Nisbett and Wilson used college students for their experiment. They were asked to evaluate a psychology professor within a few different elements as they watched him on video.

Divided into two groups, the participants were each shown one of two different video interviews with the same psychology professor. As you can imagine, in the first video, the professor presented himself as a likable, respectful person, and in the second video, he presented himself in an opposite, negative view.

After watching the videos, the students were asked to rate the professor on different elements, specifically mannerisms, accent (he was Belgian), and appearance.

Results: The students rated how much they think they liked the professor on a scale from 1 - 8, dislike extremely to like extremely. Most students were actually confused when understanding that their reactions to the videos could have had some effect on their ratings.

How Does This Relate To Inbound Marketing?

For example, if you are selling skateboards, don’t you think you may have a chance at better sales if Tony Hawk is seen using one? Or tennis balls and Serena Williams? Gatorade nails their commercials by incorporating famous, successful athletes in their advertising.

Try creating that relation with your product or service by partnering with or showcasing a well-known, trustworthy brand or representative that you know will get people excited about you.

This one talks about the comparison between grouping similar and different colors together, and the effect it has on people’s visual perception.

Problem & Goal: Thomas Sanocki and Noah Sulman set out to generate more information on color relation and the impact they have on visual short-term memory by showing participants different color patterns and asking them to recall the specific patterns.

Hypothesis: Based on the hypothesis of color harmony, it was expected that participants would have an easier time remembering the more harmonious color patterns.

Procedure: Sanocki and Sulman conducted four different sets of trials, using both harmonious disharmonious color palettes. The participants were shown two color patterns in one set: one for them to view, and one for them to compare to the first (this one was shown after the first). They were instructed to define or recall whether the patterns were the same or different. They were also asked to rate whether the pattern was harmonious or disharmonious. See the image below for an example of some different sets of trials. 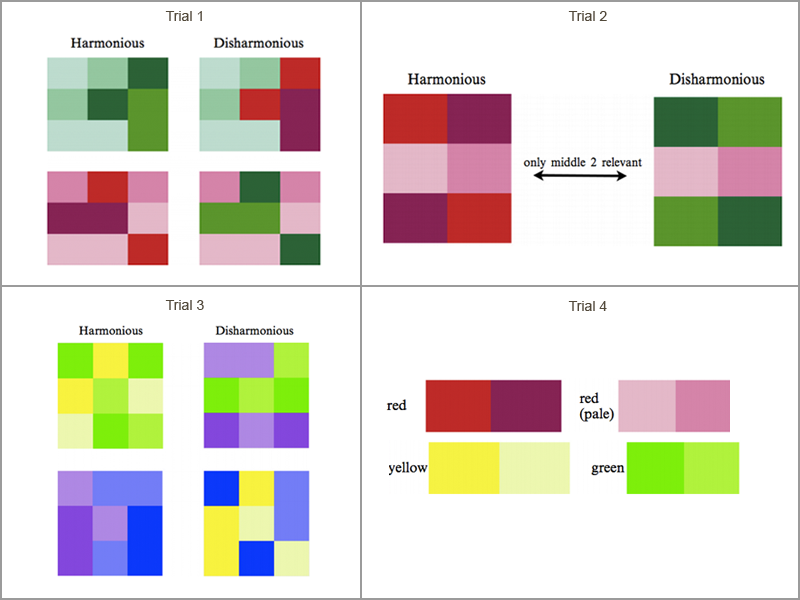 Results: The results of the experiment show that when the color patterns were more harmonious, the participants remembered them better. They were also more likely to remember the patterns better if there were two colors or fewer (no surprise).

The results yielded something pretty interesting: since the contrast of the surrounding color had some type of effect on how well people can remember color patterns, this actually implies that appropriate color differences between context and background may increase people’s ability to focus on context.

So what does that mean for you? According to Piktochart, you should:

Take some time to analyze your current website color scheme and designs. Can you improve in some areas? Can you implement growth-driven design on some pages? Experiment with different styles to see what works best.

Are you one of those people who can multitask? Can you pay attention to multiple elements at once? Or maybe you have a one-track mind and cannot be bothered when focusing on something super important.

Regardless, we all experience selective attention at least once every day when we choose to focus on a particular object or process while we simultaneously ignore irrelevant happenings that are also occurring.

Before you read on, watch the video below to get a better understanding.

Problem & Goal: Christopher Chabris and Daniel Simons set out to see just how much selective attention affects a person’s perception of certain situations.

Hypothesis: It is not clearly stated what Chabris and Simons’ hypothesis was for this experiment.

Procedure: The procedure worked pretty much exactly how you just watched the video. Chabris and Simons asked a group of participants to watch the fast-paced video and count how many passes the people in the white shirts make.

After they are done watching the video, they ask for the correct answer, followed by, “But did you see the gorilla?”

Results: An amazing half of the participants didn’t see the gorilla! This just means that their selective attention caused inattentional blindness. It leads us to believe that a great number of people are missing a lot of what is going on around them, and they don’t even know it.

In simple words, don’t clutter your website or advertisements with too much content or design elements. If you have too much going on, chances are most people won’t be able to focus on what you want them to.

Test website design elements throughout your site, and see what has the most success and increases conversion rates. And remember, start with the end in mind. If your goal is to have people download your new ebook, don’t add a sidebar telling people to subscribe to the blog; give them one clear path, and keep it simple, silly!

Use Psychology to Better Understand Your Target Audience

Move forward with some psychology in your brain. It’s really important that you know your persona and customers inside and out. Imagine you’re in their shoes. What would you want to see on your website? What would be helpful to you? What information would you ultimately be searching for? Would you answer an email with that subject line?

Then make the changes, gather the results, and take part in your own little inbound marketing experiment.