Should Brands Get Political? Report Finds Majority of Consumers Buy Based on Social/Political Issues

Sixty-four percent of consumers worldwide will make a purchasing decision based on a brand’s social or political position, according to the 2018 Edelman Earned Brand study released this week.

The report also finds the majority of the 8,000 people interviewed also believe brands have more power to both address and solve for social issues than the government.

“Brands are now being pushed to go beyond their classic business interests to become advocates,” said Richard Edelman, president, and CEO of Edelman. “It is a new relationship between company and consumer, where purchase is premised on the brand’s willingness to live its values, act with purpose, and if necessary, make the leap into activism.”

The Risks and Rewards of Brand Activism

While politicians and your friends on Twitter are digging their heels in and holding fast to one way of thinking, opinions of belief-driven messaging have been a bit more flexible.

A May 2017 report from the American Association of Advertising Agencies said that 58% of consumers disliked marketers taking political positions. And the American Marketing Association took a similar stance the following month, saying that diving into politics may strengthen brand loyalty, but it stifles growth beyond core consumers.

Time jump another six months, and you’ll see the winds starting to change. Last January, a Social Sprout report held that 66% of consumers believed it was important for brands to take public stands on social and political issues.

Brands who responded to the political climate and to changing consumer opinion have indeed experienced positive outcomes, including Patagonia, Dick’s Sporting Goods, and Nike, whose sales went up 31% after featuring Colin Kaepernick in its most recent campaign.

Bill Penzey, CEO of Wisconsin-based Penzeys Spices, has become known for his in-your-face approach to political activism and intertwining his brand with his values. In a July 3, 2018, Facebook post, he shared a year-over-year online sales view, showing the results of two offers, each tied to a political statement, made within two months.

“The first offer in the chart looks like two spikes because this is a weekly graph and that offer ran over a Saturday and Sunday. But that second offer, that big pyramid there, just ran for eighteen hours over a Thursday night. With that offer, we received an eighty-fold increase in sales over the same time period last year. Along with those orders, we get comments like: ‘Don’t mix business and politics, Bill. It’s bad for the bottom line.’ ‘I was taught years ago, you don’t mix politics or religion with your business.’ But look at the chart. This is not 80% growth, this is 80 times as much in sales!” 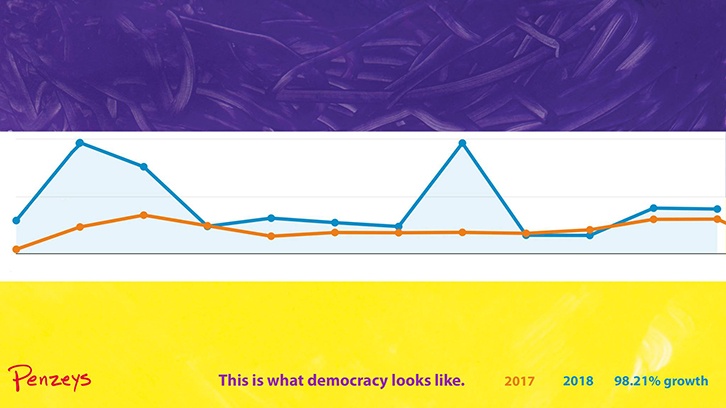 Penzey capped his post with a direct message to marketers, saying, “please be aware that the times are changing. Maybe it’s time to stop saying young people can’t be reached and instead try to get your clients to look at the values young people hold dear.”

Edleman’s recent report, paired with the type of positive stats Penzeys and its political compatriots have shown, present a good argument for engaging in brand activism if you have both the stomach and the heart for it.

But leading the cause (or even aligning yourself and your brand with one) isn’t for everyone, nor should it be.

How consumers respond to the political climate can change as quickly as the day’s headlines. After all, those reports that advised against going political happened within a mere 18 months. And just as we don’t have the ability to know what will happen next in this divisive atmosphere, we certainly can’t predict how popular opinion (or even our own opinions) will evolve.

So, You Want to Get Into Politics?

While Edelman does talk about brands’ “leap into activism,” it’s unclear whether the belief-based consumers are basing their decisions due to cause marketing or brand activism. In other words, for these consumers, is there a difference between a company that donates to a charity and one that draws a political line in the sand.

If you’re considering whether to throw your brand in the belief-based ring, there are some hard conversations you’ll need to have. The first is to dig into your audience personas and learn what they value.

Of course, the best way to find out how your clients and audience feel about something is to (say it with me) ask them. Talk with them about how they feel about brands entering the political scene and taking a stand. They may open up to you or they may not—either response should guide you one way or the other. These honest conversations will lend valuable insight into what values your customers hold, whether you and your brand are aligned with them, and how you should proceed.

“A brand must understand its audience and think long-term so that the stand it chooses authentically connects its values to its customers,” said Amanda Glasgow, U.S. chair, Brand, of Edelman.

As Penzeys learned, when that connection between message and values is genuine, support will follow. “In our experience,” Penzey said, “we’ve found that when you honestly support and speak out for the values of your customers, your customers support you.”

The other group you need to speak with is internal: your leadership team, your employees/coworkers, and yourself. The reason cause-based messaging resonates with consumers is that the brand is being authentic about its core beliefs and values. You’ll do far more damage to your brand by entering this arena with false intentions. Taking a half-hearted stand or making a statement for the sake of revenue can, and often will, lead to a PR disaster (remember Pepsi’s ill-fated Kendall Jenner campaign?).

Once you plant your brand’s flag on a social issue, you’re all in, and that’s probably not something that’s going to sit well with all your employees. It’s something you’ll have to own.

At the end of the day, only you know if you believe in something strongly enough to get involved. And while the data (for now) supports making such a move, the outcome of how your clients and prospects will react lies solely with them.