Chat Rooms and Other 90's Technology We Don't Want Back 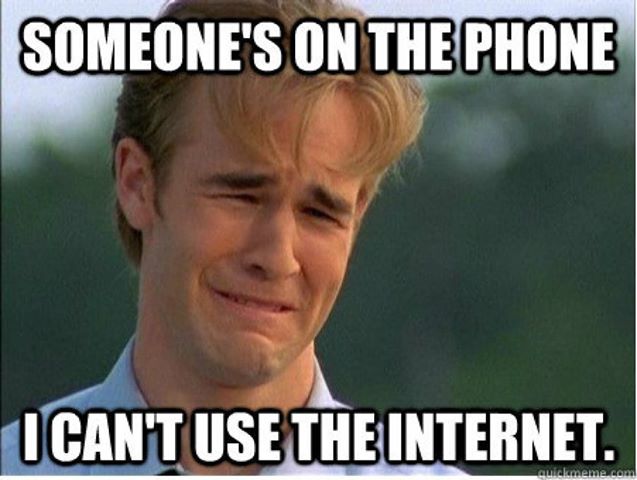 Who doesn't enjoy reminiscing about their childhood days?


Especially, the days of trying to connect to AIM. Think of all those times you were kicked offline when someone tried to make a phone call. And the horrendous dial-up tone.


I'm not sure about you, but those days should stay in the past. No one


Would you be excited if Facebook brought back chat rooms? Or is that all in the past?


Did you hear the rumor that TechCrunch leaked?


In late June, TechCrunch leaked a rumor that Facebook is working on a feature, called "Host Chat." They're saying that the chat will be similar to AOL chat rooms from the 1990s.


Facebook users would start a Host Chat, which would post on their friends' walls, giving them the option of joining the chat.


We're not sure if the return of chat rooms will be a welcome throwback or not, but it got us thinking about other technology  that we were using in the 1990's that we never want to see again.


Being able to go online was cool, but the dial-up connection was not.


The screeching noise while you waited to get on.  The fact that you had to wait to get on.  Not being able to go online because someone in your house was on the phone, or worse getting kicked offline when a call came in.


We're used to instant internet access at all times now.  No annoying noises while logging on.  No wait time.  Not only are we able to use the phone while we're online, we're accessing the Internet on our phones.


Unless you had enough of the 50 free hours of AOL discs, then prior to the introduction of gmail, you probably had to pay for your email account.


While we're talking about email, that account you paid for wasn't even your name was it?  Today people want their name as their email address so much that 7% of babies are born with email addresses.


Back then your email address was probably something related to a sports team you loved followed by the age you were when you created the email address.


You weren't getting anything important in there, like bills; so you could just change it to something different whenever you felt like it.


Before the cloud we had to save all of our work on portable devices.


Sure, a lot of people still back up their work on USBs but at least those fit on your keychain.  Bringing your own disc to save your work on at school was a requirement, and a hassle.


What if you lost the disc?  What if it got damaged?  What if you accidentally erased the content on it with a magnet?


If you still have these discs lying around and are wondering what's on them, good luck.  Computers don't even come with a drive for them anymore.


PDA's were the smartphones of their times.  Laptops were heavy. Weighting anywhere from thirteen to twenty pounds. And cell phones only made calls.


PDAs were portable devices with apps which helped you stay organized on the go.  They had touch screens, but you needed a stylus just to operated them. And the days of running electronics on AAA batteries no longer exist, unless your talking about your TV remote.


Okay all of that still sounds awesome (maybe not the stylus part) but now we have all the features of a PDA on our smartphones which means we can do all of that and make calls.


Before everyone had a cell phone, pagers were all the rage.


During the 90's they were a great way of contacting someone when they weren't at home. Hopefully, it didn't take you very long to find the nearest pay phone or that you carried around thirty-five cents at all times.


These days you rarely see anyone with a pager clipped to their pants. The same also goes for pay phones, they're pretty much extinct.


All of that seems silly now, but there is one profession that still uses them, doctors.


Okay not a technology, but you know we're right.


We wore some ugly things while we were waiting in line to rent a VHS.  It would be very hard now to take someone seriously if they were wearing parachute pants, so before you pull yours out of the back of your closet, stop.


Please leave them in "Hammer Time."