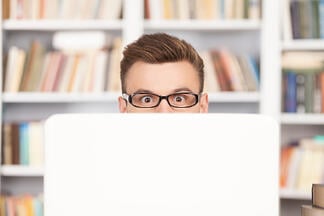 If only someone had shared these wise words with the people over at Zenefits before they went ahead and spammed our CEO, Bob Ruffolo.

Having not opted in to their email list, Bob expressed his disinterest by simply ignoring the initial unwelcome outreach. But it wouldn't be a good story if it ended there, now would it?

Aware that attracting, collecting, and maintaining a respectable email list is a meticulous process, Bob brought the story to me so that I could pull a lesson from it to share with our audience.

So before you send out an email to that list you just bought, let's talk about how it could compromise your future email marketing efforts.

Let's talk about how and why it will stifle your business.

Let's talk about why purchased email lists have never been and never will be a good solution.

Why it Doesn't Work

Before we jump into the logistics of why buying email lists doesn’t work, let’s first look more closely at these emails Bob received to further illustrate what a cold email outreach looks like.

As you’ll see, the absence of any sort of context or personalization not only renders these emails unsuccessful, but also downright creepy.

Here’s a look at some actual dialogue from the email chain:

"A friend in the agency space recommended I reach out to you about Zenefits (www.zenefits.com), and I would very much like to grab a few minutes of your time to discuss."

If a friend in the agency space really did recommended that they reach out to Bob, wouldn’t you think they’d include his/her name? This ambiguous lead in has me thinking that there is no such friend, and this email is nothing but a cheap trick.

"Wanted to try and catch you before the holiday. It would be great to squeeze in a quick call around Zenefits since we have a long weekend coming up."

CEOs are always crunched for time. What makes you think that contacting them before a holiday weekend would be a good idea? With a day out of the office approaching, it’s likely that he has even less time to deal with your unwanted emails, let alone “squeeze in a quick call.”

Come on, Zenefits. Know your audience.

"Don't mean to be a bother, but haven't heard back from you after my previous e-mail."

If you even have to make mention of being a potential bother, chances are you’re probably already bothering them. Enough said.

"My colleague Bryan called you earlier this week and asked that I follow up."

How many people are these emails coming from? Bryan called and you’re following up? There seems to be a disconnect here. Don’t make it hard for your recipients to keep track of who is who. It’s likely that they didn’t even want to hear from one of you, let alone 5 of you.

“I'm sure your slammed, more than happy to flex to your calendar. How does next Wednesday or Thursday at 11am look?”

This one’s my personal favorite. I wish I could give them some credit here for trying to create a sense of empathy, however, they used the incorrect form of YOUR.

Takeaway: Although it felt as though the emails would never subside, they eventually did. However, now that the emails have come and gone, Bob will be forever left with a negative connotation of Zenefits. Their efforts to attract him had an adverse effect, forcing him to associate Zenefits with spam, and nothing else. This is the end result that no business wants to encounter. This is why buying lists doesn't work.

4 Reasons Why Buying Lists is Not the Answer

Painful to read through that, wasn’t it?

Are all cold outreaches supposed to be this painful?

By purchasing an email list you can expect to receive quantity, but that doesn't mean you're going to get quality.

In fact, email lists available for purchase have been subject to so much misuse that you'll find it next to impossible to extract any value.

The people on these lists have already been spammed by others who have bought the same list, meaning that at this point, they have zero interest in what your business has to offer them.

They're resistant to communication, their roles have changed since their addresses have been acquired, or worse, their email addresses are inactive.

Point being, even if somebody's home, there's still nobody there willing to engage with you.

After all, anyone who has ever built and maintained a reputable email list wouldn't be willing to share. Quality email lists available for purchase simply don't exist.

2 - Recipients Aren't Interested in What You Have to Say

When a telemarketer calls during dinner, do you drop your fork, run to the phone, and listen intently to every word they say?

Why? Because not only did they interrupt you mid-lasagna, but their call was unsolicited.

When you buy an email list, you're buying the contact information of a group of people who a) don't know who you are and b) may or may not have a need for your product or service. If they don't see the value, not only will they not engage back, but there is a chance that they'll direct it to their spam folder, where the remainder of the content you send them will go to die.

This practice goes completely against the entire premise of attracting the right people, at the right time, with the right message.

3 - It Soils Your Reputation

Even if the source from which you purchased the list claims that everyone on the list opted-in, you should take their word with a grain of salt.

While the contacts may have opted-in to receive emails from their company, that doesn't mean that they'll have the slightest clue who you are when your emails come around.

As a result, your chances of earning their trust are reduced to next to nothing. Not only have they've been mislead by the source in which they initially opted-in with, but now they've been spammed by you on top of it. Essentially, you're in the doghouse.

With nothing to show for your efforts but a bunch of unhappy recipients, it should come as no surprise that your reputation is going to go down the gutter.

When you buy an email list, you're not only putting your credibility on the line, but you’re putting your email deliverability and IP address at risk too.

Email service providers keep a close watch on email activity in order to determine if a sender is reputable or not. Things like volume, bounce rate, format, and emails marked as spam all go into deciding whether or not you’re an offender.

If all of the invalid email addresses on your purchased list are bouncing, you’re basically asking to be flagged.

This can damage your deliverability, and make it difficult for you to rebuild the credibility of your IP address.

Simply put, if you buy an email list, you're asking for a headache.

Blasting out your sales pitch to a bought list of uninviting recipients wont do anything to propel your business forward, so stop wasting your time, and theirs.

Effective inbound marketing is about attracting potential buyers who actually have an interest in and a need for your product or service. So if you're looking to close sales, your efforts need to have the same focus.

While building a strong opt-in email list doesn't happen overnight, the return will be much more rewarding when people actually value your outreach.