6 Habits of Successful People That You’ll Want to Steal 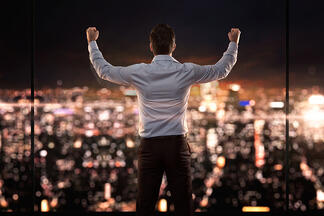 I once saw a mug with a saying on it that was so powerful, it shook me to my core.

"You have the same number of hours in the day as Beyoncé."

But seriously, it really got me thinking about what it takes to be truly successful.

If we're all armed with the same 24 hours, we can all achieve something remarkable if we truly will it. It's not so much the time and space we're allotted that influence our ability to succeed, but rather the habits we adopt and the actions we pursue that contribute to our growth.

If you're feeling like your 24 hours aren't enough, take note of the habits we've outlined below.

They Delegate What's on Their Plate

If you're working with a team, don't play by yourself. After all, there's no I in team, right?

Truly successful people delegate their projects in order to increase their level of efficiency, and eliminate the fear of oversight.

They recognize that struggling to maintain control over everything doesn't make them a good leader, it quite simply makes them a struggler.

In doing so, they have more time to focus on propelling aspects of their business that specifically require their attention and expertise.

They Think Smarter, Not Harder

Don't get me wrong, growing and scaling a business calls for a healthy amount of sweat and tears.

It's really easy to get overwhelmed when looking at the big picture of things. Big goals, big numbers to meet, and big projects in the making all require effort, discipline, and a strategic approach.

Successful people don't allow their big aspirations to consume them, but rather, they focus on what has to get done today.

By prioritizing their time in accordance with the level of urgency attached to each of their projects, it's easier for them to remain motivated, stay on track, and meet the deadlines necessary to complete the big picture.

When they find themselves in need of a blog post by noon and it's already 11, they don't race to put together something lukewarm before the clock strikes twelve. Instead, they get creative. They seek out a well-performing ebook, pull an excerpt, add a new introduction, optimize it, and publish it with time to spare.

They keep calm and carry on.

Successful people recognize networking as one of the most valuable uses of their time.

They understand that any opportunity to learn from others, get the word out about their business, and build relationships with industry influencers and potential customers is one worth seizing.

Whether they are attending networking events that aim to bring together like-minded, motivated business people, or expanding their professional network on LinkedIn through the distribution and consumption of relevant content, they're working to create something bigger than themselves.

While it's common to view risk-taking as a a misguided approach to handling any business venture, successful people would argue that that's not always the case.

Rather than focusing solely on the potential danger in taking risks, they see an opportunity to challenge the status quo. As a result, they become known as the path pavers, the pioneers, and most importantly, the people who stand out.

They're well-versed in the logistics of risk management, but they are the first to capitalize on the unexpected opportunities that risk-taking can bring about.

They Are Never Afraid to Say No

For something as simple as a two-letter word, saying "no" can often times feel like an impossible feat.

In an effort to manage their time more effectively, successful people don't make promises that they can't keep.

Before agreeing to take something on, they take the time to evaluate whether or not they have a handle on their current priorities.

They Measure Their Metrics

There's a business proverb that states, "You can't manage what you can't measure."

The businesses that hold themselves to this way of thinking are the the ones who will have the greatest understanding of what is working where and why.

Defining metrics allows you to eliminate the guesswork and hone in on profitable opportunities and potential threats to the business.

People who are in-tune with their metrics have a better vision in terms of future content creation, and a more informed framework to base their decisions off of.

Ultimately, having defined numbers to refer back to makes it harder for themselves and their team to ignore their weaknesses and embrace their strengths.