What do a Beyonce meme, a Gary Vaynerchuk quote, and a chocolate chip cookie recipe all have in common?

While this may sound like the lead up to the punchline of a bad joke, what I am about to tell you in fact very valuable.

At one point today all three of these stray items found their way into my Tumblr dashboard.

What's Tumblr? Why should you care?

Home to 158.7 million blogs, containing 70.1 billion posts, Tumblr is a social sharing platform that was founded during a chilly February in 2007.

Tumblr makes it easy for your business to customize an account and share photos, text, music, links, videos, and even chocolate chip cookie recipes in just a few clicks.

Sounds a lot like every other social sharing site that you're already registered for?

Let's not jump to any conclusions here. You may be surprised to learn that in the last 12 months, Tumblr has achieved a growth rate of 74%, while Twitter and LinkedIn have experienced about a 40% growth rate. (Source: Jeff Bullas)

With visual content becoming more popular than ever, We encourage business to take a look at how Tumblr can improve their content marketing strategy.

Photos account for 98% of engagement for top brands on Tumblr. (Source: Simply Measured)

With nearly half of the entire platform's content in visual form, Tumblr is ready and willing to open your visual content with open arms. When it comes down to it, people only remember 20% of what they read, therefore condensing your written content into something a bit more visual may improve your ability to serve up information that truly resonates with your target audience. (Source: J6 Design)

You want your audience to take away something of value from the content you create, which is why presenting your information visually is an excellent alternative. If your business is seeking to educate, start thinking in color, contrast, and graphics rather than black and white typeface because research shows that 83% of learning is done visually.

It's Home to a Highly Active Community

Having created 3 different Tumblr accounts of my own, I am no stranger to the Tumblr community, and it's safe to say they're a welcoming bunch.

The fact of the matter is, Tumblr users are constantly reblogging, favoriting, and commenting on the types of content that they deem interesting.

While we encourage your business to focus mainly on posting origional content, reblogging informative, relevant content from other users will help to get your name out there.

When it comes down to it, the reblogging feature is a marketer's best friend. Simply put, a "reblog" occurs when another user shares your original post on their page; something like a marketing shout out.

In a study done by Simply Measured, brands learned that the "shelf-life" of their posts was much greater than that of engagement on Twitter or Facebook. In fact, only 6% of the initial notes on their posts happened to be reblogs. However, through their analysis of MTV's Tumblr success they noted that while the brand saw 62,000 reblogs in 30 days, approximately 1/3 of all reblogs take occur more than 30 days after the original post.

The longevity of Tumblr engagement sets it apart from the other social platforms, giving your company even more of a reason to experiment with the tool.

It's an Inspiration Station

Writer's block is no joke. As a content marketer, I know first hand that there is nothing worse than staring at an empty white screen while your eyes start to slowly glaze over.

You've already called upon your favorite run down of industry blogs, you've scanned your Twitter feed 5x over, and you're paralyzed by your own inability to formulate anything, but have you checked Tumblr yet?

If your content ideas are begining to feel a little too vanilla, a scroll down Tumblr lane may be just what you need to get those creative juices flowing once more.

With an expanse of quotes, images, artwork, and stories, a quick visit with the search box in the right corner will help you navigate your way through it all.

Whether you come across a meme that tickles your fancy, a blog article with a social media statistic that you've never come across, or a quote that gets your gears turning, Tumblr houses all sorts of creative content.

In case you're still on the fence, have I mentioned that Tumblr is chock-full of SEO features? 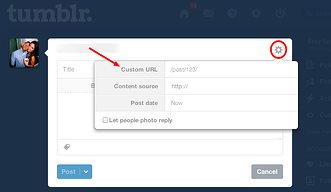 Right off the bat Tumblr allows you to customize your domain name. During the initial set up of your account, you will be given the opportunity to select a personalized URL that implements your company's name or product as a way to drive traffic back to your site.

In addition to a custom domain name, Tumblr allows you to generate a custom URL for each and every piece of content you post.

Simply click the settings icon in the right corner and the custom URL box will appear.

..and strive for URLs that are more SEO friendly like this:

Additionally, Tumblr allows you to add captions and tags to your photos to increase searchability, making it easier for users to find, reblog, and interact with your content.