Here at IMPACT, we recently created a welcome video that would be sent out to our new clients via email.

Knowing that video can have a positive effect on any professional relationship, we created this in hopes of starting on our best foot forward with new clients and customers.

Videos can help  create trust and camaraderie. This would, in particular, was designed to help clients get to know   the people they’ll be working with, get a look into the vibe of the office (as many clients are far away), and without really featuring it, look into the very basics of what our video team is capable of.

Here’s a little behind the scenes look at the vision of our welcome video and how it came together.

IMPACT has been investing heavily in video in the past year both internally and for clients. With this in mind, we thought it was only fitting that we kicked off our new relationships with a video.

Like any video, ours was the culmination of three stages: pre-production, production, and post-production.

Pre-production is the planning stage. This is where we get write and approve scripts, storyboard, confirm locations, and schedule talent.

Then, production is the actual shooting of the video, usually following a schedule dictated by the script.

Lastly, post-production is where it all comes together with editing, internal review, and final rendering. This can be everything from simple cuts to elaborate graphics and green screen.

Shandia Drummond, one of our account managers, was the woman with the plan when it came to this welcome video. I cannot emphasize enough how important the planning of this video was in the end result.

She put together a script and organized the whole in-office team to have small parts in it.

She made sure that everyone knew where they had to be and when, as well as what they needed to do or say.

That means she wrangled at least ten super busy people and made sure to put them in specific places at certain times. Incredible!

While we didn’t necessarily draw out a storyboard as we typically would in this stage, Shandia had a clear path mapped out through the office with interactions marked along the way. For example, when she stopped at the screens, Katie would be there, pretending to host a meeting.

All of her pre-production work made it super easy for me to just show up and help shoot.

The big thing for this production was that it was our first shoot on our new equipment. We invested a lot in new gear for a few reasons.

While general audiences may not be trained to look at certain aspects of video that videographers do, they will notice subpar footage.  This, in turn, reflects poorly on your company.

A poorly-produced video is the equivalent of wearing sweatpants to a business meeting. It creates the perception that you don’t hold much value in quality or presenting yourself professionally, or even that you are unable to. For a company actually selling video, this was an impression we couldn’t afford.

As the introduction to most of our company, we wanted to set a standard for high quality work with our welcome video.

That being said, let’s get into how and what we did.

Originally, the plan had been to do an actual one-shot video, wherein we would press record, do the entire thing like a three-minute play, and stop recording.

We quickly realized, however, that that wouldn’t be possible.

That kind of video takes a lot longer to plan, and a lot more time for everyone in the office to practice than we had at our disposal. So instead, we opted to make it look like we did that by shooting a few shorter segments and putting them together in post production.

We shot all of this on our brand new three-axis gimbal and handheld stabilizer rig from Feiyu-Tech for smooth shots that felt like you were walking through the office with us.

We also used a wide angle lens (24mm) to see the most of the office that we could.

We used a small LED light on the hot shoe of the camera to light her face continuously so we didn’t have to put any lights in the scenes, which wouldn't have looked natural.

Our Sony A7r iiis are great in low light, but they can’t do all the heavy lifting.

The light we put on the camera brightened her eyes on camera, while maintaining the illusion that you’re in a completely natural day for the office. If you’d seen huge lights and stands in the background, it could have felt staged.

I’m all about those low-budget solutions, so here’s a fun one for you: for the last shot that looks like it might have transferred onto a crane, it was actually me putting a step stool down for Alex to stand on! 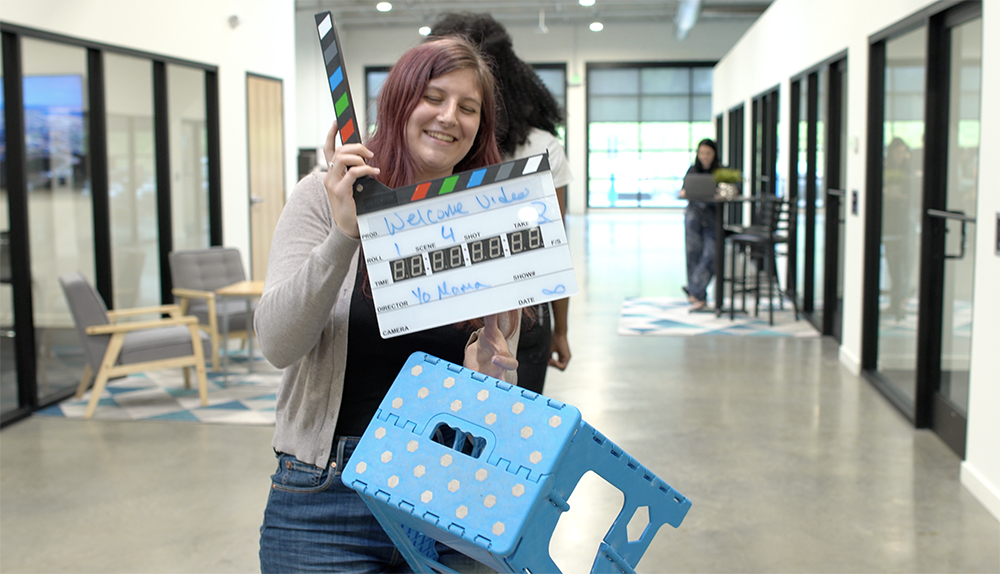 For audio, we put a lavalier on Shandi, and hid the recorder in her back pocket! 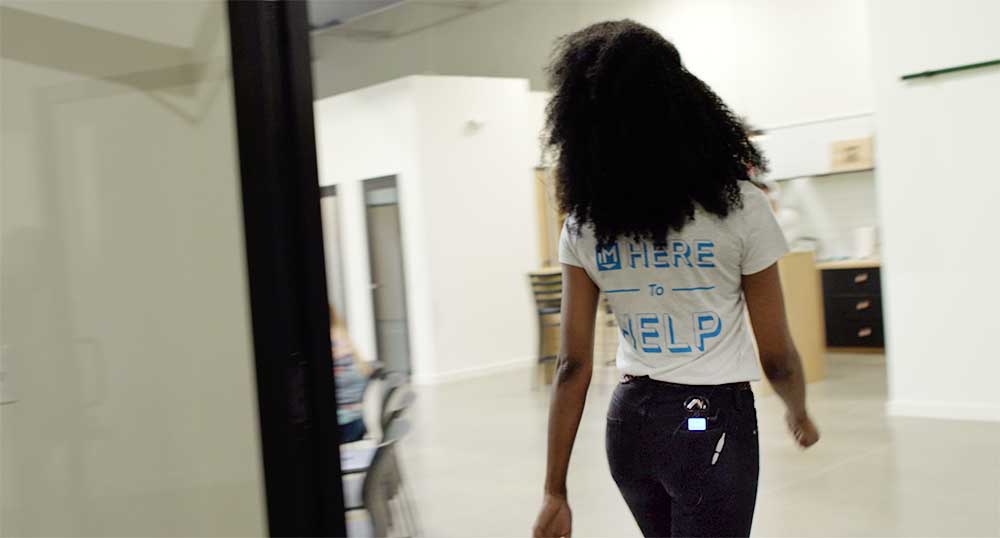 I put green screen on the TVs (though next time I would put markers on, as I had to hand track a lot of it), so I could put in a video recording of remote people calling in for a meeting, as we normally do.

The big green screens against the big white wall didn’t leave much for my programs to track. This means that instead of following along perfectly with the screen to make it seem the video was playing there in the actual shot, it was floating around, not convincing anyone it was really there.

Having markers on the screen would have made it a lot easier to track the video to the screen, so if you’re looking to do something like this, I recommend finding a green screen with a few black Xs. 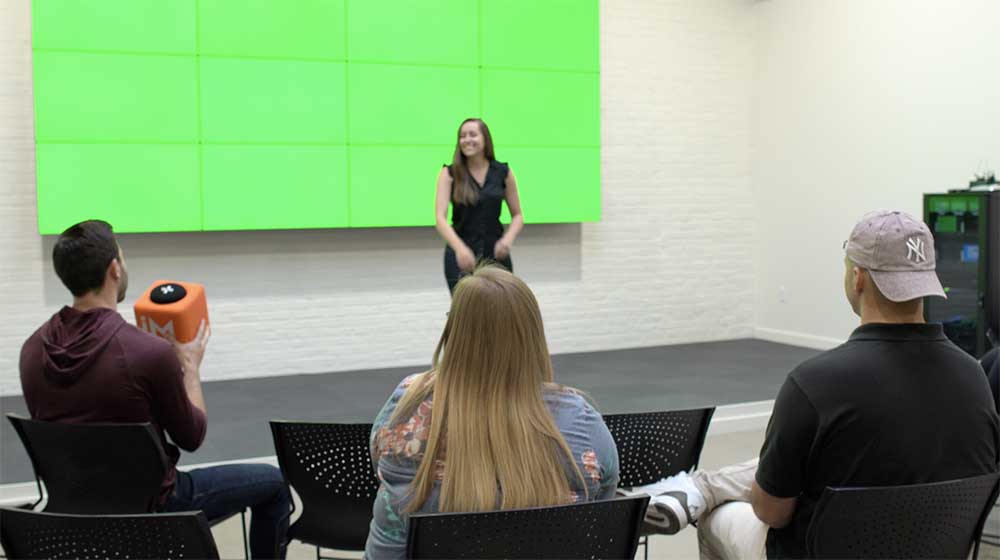 To prep for what I would need to edit it, I made sure to tell Alex, the cameraman, what I needed - whip pans (places to hide the cuts between the segments where everything is blurry)!

For my editor brain, I knew that I needed blurry transitions to better hide the cuts. These are something that you can add in post, but are smoother if done on camera.

The other important thing we did while filming was to make sure her walking speed and frame placement were as close to each previous shot as possible. It would have been weird if she was just laughing and jogging in one shot and solemn and slowly walking in the next.

Continuity like that is often forgotten about until you’re shooting, but it’s one of the most important things in a shoot like this. That continuity is one of the things that made it seamless.

Now, that the filming was done, it was my time to shine.

The big thing was to make the cuts seamless to maintain the “one take” illusion.

I achieved those blurs between the cuts through a combination of keyframing blur effects and time remapping.

We probably went a little overboard with the green screen and tracking - you don't have to go that crazy, your effects can be more practical. For this, however, I tracked the shot and put in a pre-recorded video onto the screen behind Katie.

We could have put a video onto the screen while filming, but we wanted the flexibility to change the video as needed.

It took almost no time to edit since we organized it so well!

The internal review process was similarly easy. Going into it, we all had a solid idea of what the video would look and sound like, so when it was finished, it was more or less what we had anticipated. I sent the video out to the team to review, and with some minor tweaks of timing, we finalized it.

The power of a warm welcome

In a way, it’s similar to looking at photos and videos for buying a new house.

When working with a company, especially for a service, people are investing a lot and you want to know what it’s going to be like.

By showing not just one face, but a large part of your team to the viewer, you build trust before they even have their first official meeting.

They get to know your business, they see what it looks like on a daily basis where you work. They see it’s not a mystery and you’re not hiding anything.

The benefit of this video is transparency and openness. As we all know, that’s what builds the strongest customer relationships.

We’ve had clients who have expressed how welcome this video made them feel, as well as a few who now want their own. We didn’t expect to get business out of this, but one of our clients now wants us to shoot a video just like this for them.

Overall, it was one of the best projects I’ve worked on, and I hope you all are inspired to try one out too.