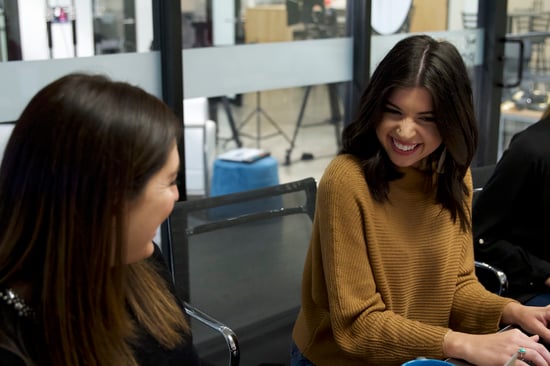 Recently, I was talking with IMPACT COO Chris Duprey during one of our leadership development meetings and was asked whether or not I was self-aware.

Everyone in the meeting had taken an online assessment of our behaviors and I proudly stated that it didn’t reveal anything earth-shattering to me.

That I, in fact, was self-aware of the areas I excel in and areas I need to improve on.

Chris smiled and asked, “would your team agree with that assessment?”

“Right, but do you actually know if they view you the same way as you view yourself?” he countered.

“No, I can’t say for certain whether or not they would assess me in the same way,” I finally answered, feeling somewhat defeated.

Because, at that moment, I realized I wasn’t truly self-aware.

Organizational psychologist Tasha Eurich spoke on this very topic at a TEDxMileHigh event, revealing why it’s so important for people to be self-aware, how we can take steps to become more self-aware, and the one question to ask when trying to be more introspective.

Eurich defines self-awareness as “the ability to see ourselves clearly, to understand who we are, how others see us, and how we fit into the world.”

Why is self-awareness so important when it comes to your business?

Eurich explains that there is a lot of research that shows people who are self-aware are more fulfilled.

“They have stronger relationships. They're more creative. They're more confident and better communicators. They are less likely to lie, cheat, and steal. They perform better at work and are more promotable. And they're more effective leaders with more profitable companies.”

According to Eurich’s research team, 95% of people think they're self-aware, but the real number is closer to 10 to 15%.

So, essentially, we are all lying to ourselves.

How can we know if we are indeed self-aware?

The “self-awareness unicorns,” as Eurich called them, are people who believed they were self-aware based on an assessment her team drew up and someone else who knew them well had to agree using that same assessment.

Also, “[the unicorns] had to believe that they'd increased their self-awareness in their life, and the person rating them had to agree.”

How can we become more self-aware?

Eurich explains that the way we go about pursuing self-awareness doesn’t work.

“Thinking about ourselves isn't related to knowing ourselves. So to understand this, let's look at the most common introspective question: ‘Why?’… Unfortunately, when we ask ‘Why?’ it doesn't lead us towards the truth about ourselves. It leads us away from it.”

Researchers have shown that it’s near impossible for us to excavate our unconscious thoughts, feelings, and motives.

Because so much is hidden from our conscious awareness, we end up inventing answers that feel true but are often wrong.

Asking “Why” feeds into this.

Eurich gives an example of a brand manager who got a terrible performance review from his new boss.

He could have asked himself "Why are we like oil and water?" but instead chose to ask "What can I do to show her I'm the best person for this job?" Eurich notes, it changed everything.

Asking why they are so different wouldn’t really have led the brand manager to a solution.

Instead, he probably would have been frustrated in thinking they are too different to work effectively together. Asking the “what” question allowed him to remove his feelings from the situation and focus on the action he could take.

Eurich says, “I have seen so much evidence that self-awareness gives us a much better shot at finding happiness and success in this crazy world.

To start, we just need to change one simple word. Change ‘why’ to ‘what.’

Why-questions trap us in that rearview mirror. What-questions move us forward to our future.

Since my meeting with Chris, I’ve made a conscious effort to focus more on asking “what” questions instead of “why” questions and have realized I’m more productive and present because of it.

Now, I don’t believe I’m truly self-aware yet but I do believe in the importance of it and am committed to developing that trait daily. And that, to me, is a step in the right direction.

Executives and Leaders
Published on December 29, 2019

How To Align Your Sales And Marketing Teams In 2022

What Is a Revenue Team? (Definition + Video)

Yes, They Ask, You Answer Works for B2B Companies (+Examples)

Outsourcing Is Broken: Why We Need To Rethink the Relationship Between Client and Agency

Who Should Be On Your Content Marketing Team? 5 Critical Positions

The Digital Marketing Plan to Franchise Your Business: They Ask, You Answer

How much does marketing news really matter? (Content Lab, Ep. 56)

Why you need to hire a coach to spur business growth