In the early hours of Wednesday, October 17, millions of video lovers in the United States and Europe reported seeing 505 error messages when they visited YouTube -- everyone’s favorite video streaming site.

Of course, you know what happens next. As with any social platform outage, everyone remained calm and orderly. The internet took a collective deep breath and waited patiently to hear on a resolution from the video giant. 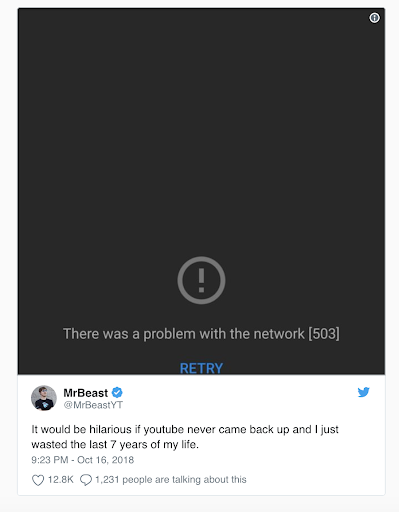 A journalist speculated on how something like this could have happened: 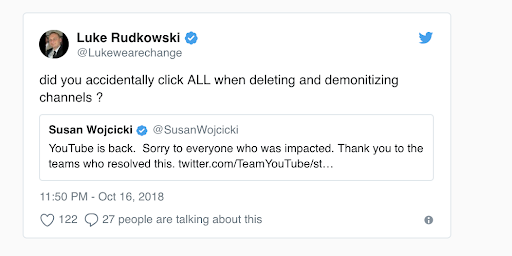 ...and, apparently, some concerned citizens from the "City of Brotherly Love" reached out to local law enforcement:

Based on these reactions you would think Youtube had shut down for a day, right?

Au contraire, mes amis! The YouTube team was able to resolve the issue and restore services in one single hour.

How Did the YouTube Brand Fare After the Shutdown?

With all of the reactions and news attention the YouTube outage received, you might think its competitors had a field day.

While they probably relished that daydream, back here in reality, on planet Earth, YouTube did just fine.

Even though there are other streaming services like IGtv, Facebook Watch, and Vimeo, the discontent over the YouTube outage seemed to fizzle out as quickly as it flared up in the first place.

Although, YouTube celebrity even called out the competitors letting them know it was their time to shine:

If anything, the platforms that benefited the most from YouTube’s outage were Twitter and YouTube, with users taking to Twitter to see if others were experiencing the same issue. Then, as soon as it was fixed, they flocked right back to YouTube, resulting in a surge of views to the service.

Bottom line, YouTube received an avalanche of free publicity, both bad (when it was offline), but also good (as excitement built once people realized the platform was back online).

And now things are back to normal.

What Lessons Does the YouTube Outage Hold for Brands?

If people like something, a lot, then they typically spend most of their time on there.

Even if the sky falls ever so briefly -- in the case of YouTube, one hour -- and brand evangelists cry foul, they are rarely actually considering making a move or abandoning their beloved platform of choice. They're simply understandably upset that things aren't working the way they're supposed to.

Of course, that only works if whatever platform is able to get their act together and quickly fix the issue. And, as necessary, make amends.

(As you may or may not recall, HubSpot modeled how best to handle those scenarios, when something goes wrong and impacts customers.)

If you're a brand that leverages YouTube for advertising, we hope it goes without saying that your investment is still safe. Technological hiccups happen, and even the most reliable platforms experience outages.

Plus, if YouTube can crash for an hour and then get even more viewers once it’s back, you know it’s a good investment for your paid spend.

“Video advertising is a core growth tactic for the major social networks because it is engaging and easy to monetize. In fact, in 2017, social video advertising spending leaped 130%.”

But we can still mentally note this event as another example of how things can (and will definitely) go wrong on the platforms we rely upon.

And, as marketers, we have to be prepared in our strategies to handle the effects of those events on our own results, while also not losing ourselves in a needless panic.