"Own your mistakes. That’s a core tenet of the Customer Code that HubSpot announced on stage at INBOUND this week. We just didn’t know we’d have to put it to use so quickly," HubSpot COO JD Sherman wrote today in an article simply titled "We're Sorry."

That's because, in the early morning hours of September 6, some HubSpot Marketing Enterprise customers began experiencing serious issues within their portals -- live website pages were returning 404 errors, scheduled emails weren't sending, and running workflows were disabled, to name a few.

Shortly after 4:30 a.m. Eastern, HubSpot shared they were actively working to resolve the issue:

By approximately 7 a.m. Eastern, they had fixed the underlying issue -- a bug in the configuration code -- but they were still working to restore the features and services that were not working for some of their Marketing Enterprise customers:

In what some might consider a cruel twist of fate, this came on the heels of yesterday's inspiring #INBOUND18 keynote from HubSpot CTO and cofounder Dharmesh Shah, which unintentionally foreshadowed what was to come.

Dharmesh Shah at #INBOUND18: "We all make mistakes."

During this year's #INBOUND18 keynote, Dharmesh sought to answer a simple question -- "How do you grow better?"

He found himself asking this question because, as he said in an article yesterday for ThinkGrowth.org:

"Somewhere along the line growth shifted in our global discourse from an enabler to an end-goal. And when you make growth the end-all-be-all, you lose perspective.

You start to solve for your bottom line above all else, even, at times, at the expense of your customers.

It's not enough to grow. We have to grow better."

He told us yesterday during his keynote that one of the most important ways you can grow better as an organization is to "own your screw-ups." 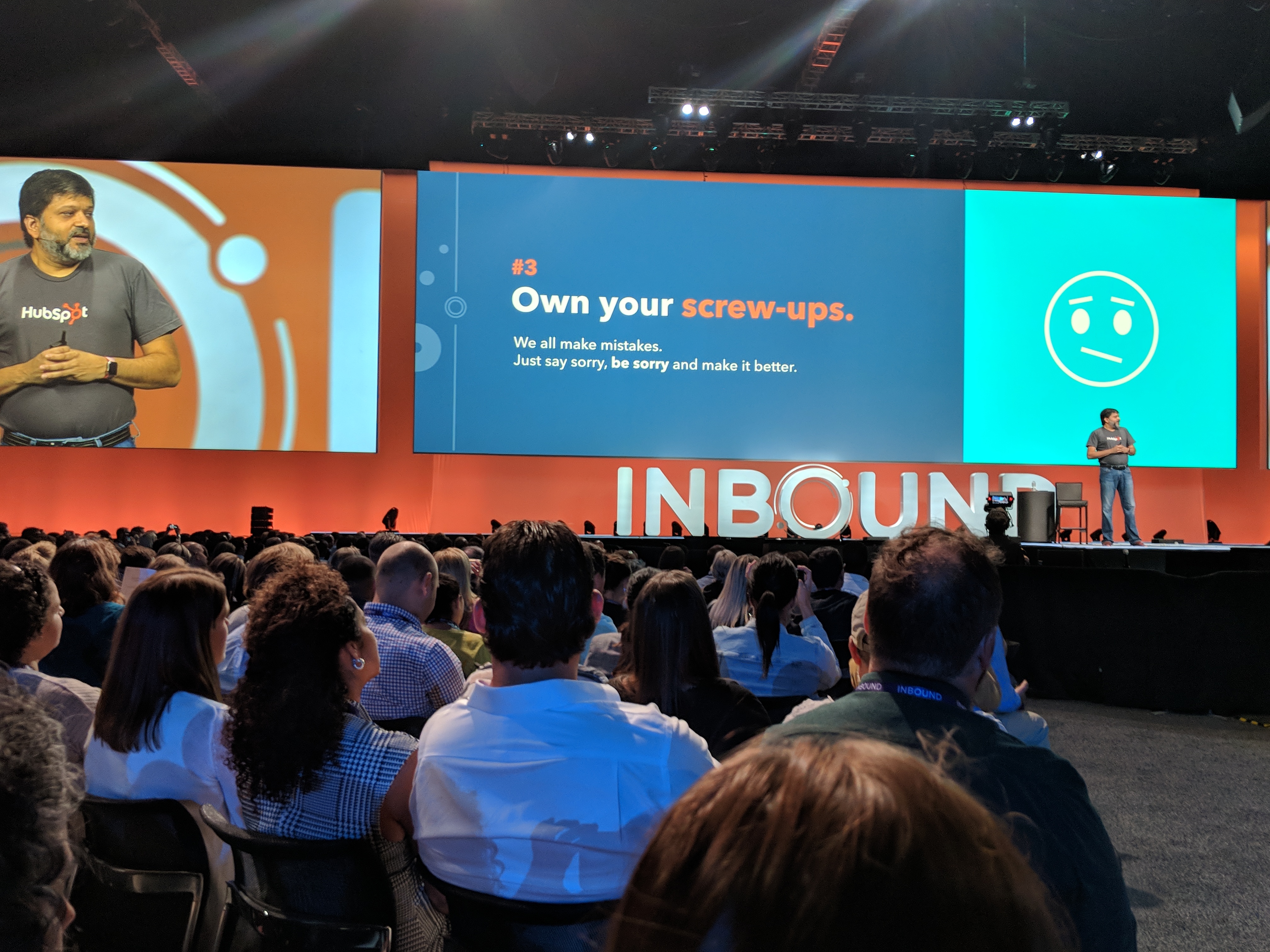 "We all make mistakes. Just say sorry, be sorry, and make it better."

To drive home his case, he shared how, even though he's a lifelong vegetarian, he fell a little in love with Kentucky Fried Chicken when, early this year, they had to apologize for literally running out of chicken:

From the HubSpot Customer Code

As JD Sherman admitted, the team at HubSpot didn't realize they were going to be in the position of having to practice what they preached less than 24 hours later.

In addition to JD Sherman's direct apology on their blog, HubSpot sent out an email to their partners:

Not only did they explain what happened when and why, they did not dance around an apology or mince words when they explained they understood the impact of the incident:

"Any outage is bad, but an outage that affects a website — a company’s digital front door to the world — and key tools like workflows is worse.

For those affected, we are so sorry our mistake disrupted you and your client’s business."

They also continued to provide updates throughout the day, as services were restored.

What Can We Learn from This?

Though the timing of Dharmesh's keynote and the HubSpot Marketing Enterprise outage borders on comical, the reality is that we will all find ourselves -- either as collective organizations or as individual contributors -- in scenarios like this.

That's why we've written extensively about how to handle mistakes in the past, and just recently an IMPACT Elite member started a discussion around marketing errors in the workplace due to their own recent incident.

We can't avoid ever making mistakes. But we do have full control over what happens when we do -- especially if those mistakes impact our customers.

At some point, however, we stopped apologizing.

Instead of admitting we made a mistake, we would say something passive like, "we regret the error." Or we would communicate we were sorry for a screw-up causing big problems for others by saying "we apologize for any inconvenience this situation may have caused."

We fell into the trap of relying on all of those canned responses that we, as customers, know are hollow and are designed to sound like an apology without actually taking any responsibility.

The good news is that our fear of apologizing is unfounded. And Dharmesh showed us through data during his keynote that customers will forgive us: 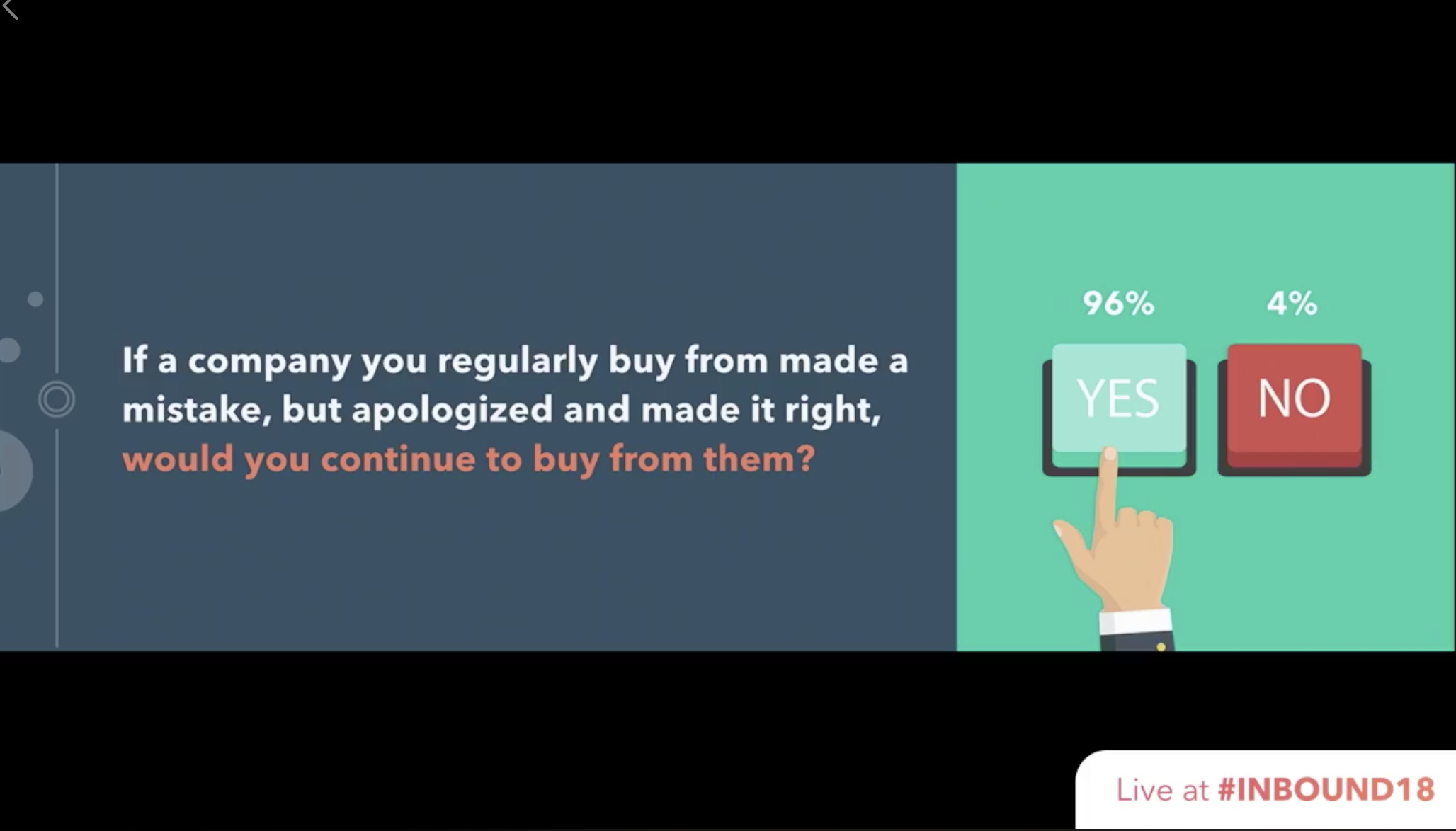 There's no such thing as a well-timed mistake. Still, HubSpot rose to the occasion when they had a big fire to put out this morning.

They owned the screw-up.

They're making it better.

If you're at #INBOUND18 stop by and see us at Club INBOUND, across from HubSpot HQ!