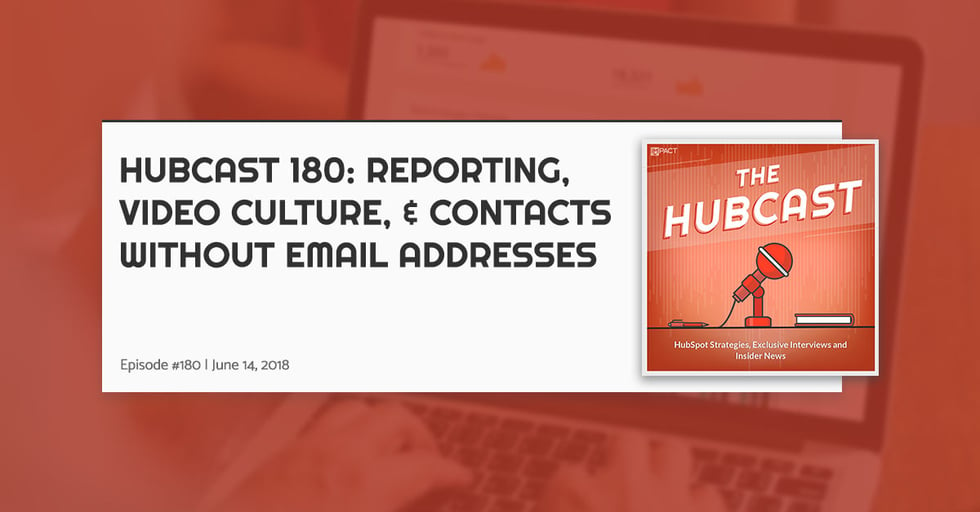 This episode of the Hubcast is brought to you by our HubSpot Intensive Training (HIT) Workshops.

We’ve got you covered.

A few INBOUND breakouts we think will be interesting:

Note: Mari teamed up with IMPACT to present an AWESOME webinar on this earlier this week. You can get the recording here.

Property of the Week:

“The days that elapsed from when a contact was created until they closed as a customer. This is set automatically by HubSpot and can be used for segmentation and reporting.”

A lot of people purchase HubSpot because of its reporting capabilities, but many of them never get to a place where they’re actually able to report on the important stuff.

If publishers like the Washington Post are finally catching on to video, don’t ya think it’s time your business starts thinking the same way???

“It might seem surprising, but video is still a novel thing for many publishers. That’s especially true for legacy publishers that come from a long, rich tradition of print, like the Washington Post.

But last year, we realized we needed to do more in such a critical part of our storytelling.

Our audience wants to experience and engage with stories, and we have a lot of stories where the best way of doing that is through video.”

(Go where your audience is):

“The audiences are definitely different across all the platforms.

For example, we see YouTube as a great place to reach a younger audience that might not come directly to our homepage.

Hearst UK has a video editor for Good Housekeeping and Cosmopolitan, and since last year, it has hired an additional three video editors for a centralized video team.

Investing more time and energy in creating original video led to a refocus on distributing on Hearst’s own platforms.

Many organizations who make an initial investment in HubSpot think that it’s going to do the work for them, and that’s just not true.

Talk to Us Today!

“If your contacts primarily communicate through a channel other than email, you now have the option to create contacts from a form submission without an email address.”

*Be careful! This can lead to duplicate contact issues!

[Now Live] A new way of Associating contacts, companies, and deals together on Mobile

“We have rethought how our mobile apps handle associations between contacts, companies, and deals. Both our iOS and Android apps can:

If you’re listening on iTunes - head on over and leave us a review! We love hearing your feedback, so feel free to leave some in the comments, or shoot me an email at cduffy[AT]impactplus.com!

Until next time, this is Carina Duffy & Marcus Sheridan saying to you, go out into the world and do some happy HubSpotting!