Video Killed the Ebook Star? What the HubSpot/Wistia Integration Means

Back in 1981, MTV aired its first music video, Video Killed the Radio Star from The Buggles, and ultimately changed the way everyone consumed and discovered new music.

While the cheesy hit certainly wasn't the first music video ever recorded, because of the newly minted Music Television, it was the first

Free Guide: The Inbound Marketer’s Guide to Maximizing HubSpot ROI
video delivered in such a way that reached the right audience at precisely the right time.

In the arena of Inbound Marketing, we could potentially be witnessing – albeit to a smaller degree – a similar tide change in regards to the way in which agencies and companies manage their resources to generate leads.

With the HubSpot and Wistia integration that's been teased since July, our jobs as marketers is about to get a whole lot more interactive, visual, and most of all, fun.

Will the ebook fall into extinction? Unlikely. However, if there's anything that MTV, YouTube, Vine, and Instagram has taught us, it's that when given the choice, people prefer video.

And in some cases, video even changes the behavior of an audience. Time will tell. But here's why you should be taking video very seriously from here on out.

HubSpot Forms on a Wistia Video?

As of right now, you can include a HubSpot form in any video you upload into Wistia. 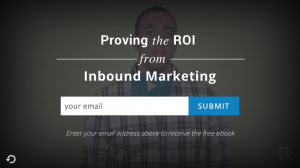 Let me say that again....you can actually generate leads within any marketing video. No landing page necessary. (See image above.)

How big a deal is this? Well consider this; according to a 2013 study conducted by Read Faster, 33% of U.S. adults will never read another book after graduating high school. Shockingly, this number jumps to 42% for those graduating college.

Social commentary aside, a large percentage of educated Americans don't even care to read recreationally.

This doesn't mean you should kill your blogging strategy, or even your premium content strategy for that matter. It simply means you should start supplementing those resources with some resourceful, instructional videos that educate your prospects, while also acting as a tool for lead generation.

There are three steps to getting fully integrated:

Done. You can now insert HubSpot forms into any Wistia video.

Start introducing some instructional videos into your mix of premium content.

For example, focus on creating a 10-minute video where you discuss in detail how your prospects can both identify and create accurate buyer personas. However, try inserting a form after the first 2 minutes in order to entice your viewers to convert in order to get the rest of the information.

Imagine a library of instructional videos your prospects and lead – and even customers – could use to both learn and reconvert.

While I certainly wouldn't want to spoil any surprises that lay around the corner, just imagine how valuable it would be to know which of your leads is viewing a specific video on your website or blog.

Regardless if they reconvert on a form or page, wouldn't you like to know who's viewing your company video?

The value here will lie in your ability to create segmented lists based off of contacts who have viewed specific videos and subsequently send them even more resources that relate closely to what they've already watched.

Say someone views your "Free Demo Sign Up" video, yet doesn't actually convert on the form.

The value of segmented these specific contacts into their own list, and crafting a highly targeted email message in order to entice them that you free demo is actually worth it is priceless.

Most importantly, it's going to be a reality.