Confession: I screen phone calls all. the. time.

My close friends know if they call me, the meme below summarizes my reaction: 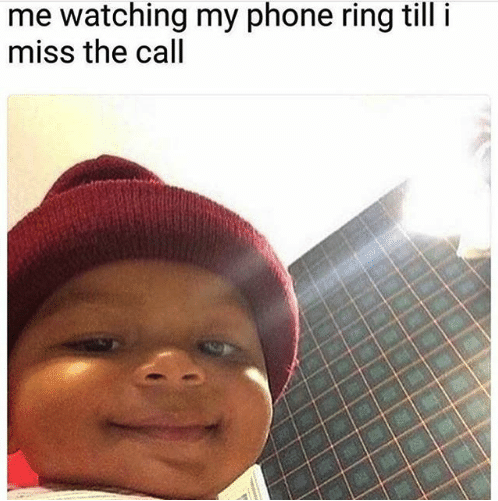 And I’m not alone in this — despite the majority of people having their phones on them 24/7, unexpected phone calls will most likely go unanswered.

The decision to screen phone calls can be for a multitude of reasons — people are busy, they don’t know what you want and don’t have to answer on the spot, or they may not know how long the conversation will take.

Most importantly, people know if the caller has something really important to say, they’ll just simply text them the information after the call gets sent to voicemail.

With that logic, if I’m ignoring phone calls from people I actually know, of course answering unknown numbers is out of the question.

Often times on the rare occasion something compels me to answer an unknown number, it’s a robocall, someone telling me I won a free Caribbean cruise, or other scam.

Turns out, according to recent research by ZipWhip this mentality is shared by many consumers today, supporting overwhelming claims that cold calling is dead.

ZipWhip conducted a test surveying 520 consumers on their communication preferences with brands, and found that a staggering 87% of participants reported rejecting or ignoring phone calls recently from an unknown number.

In order for businesses to reach their customers effectively, it’s important to know how they like (and how they DON’T like) to be communicated with, and why.

Why are people ignoring phone calls?

The survey found that over 96% of respondents find phone calls to be disruptive.

The reason why varies from person to person. So, ZipWhip dug deeper to find out why people hate receiving calls. 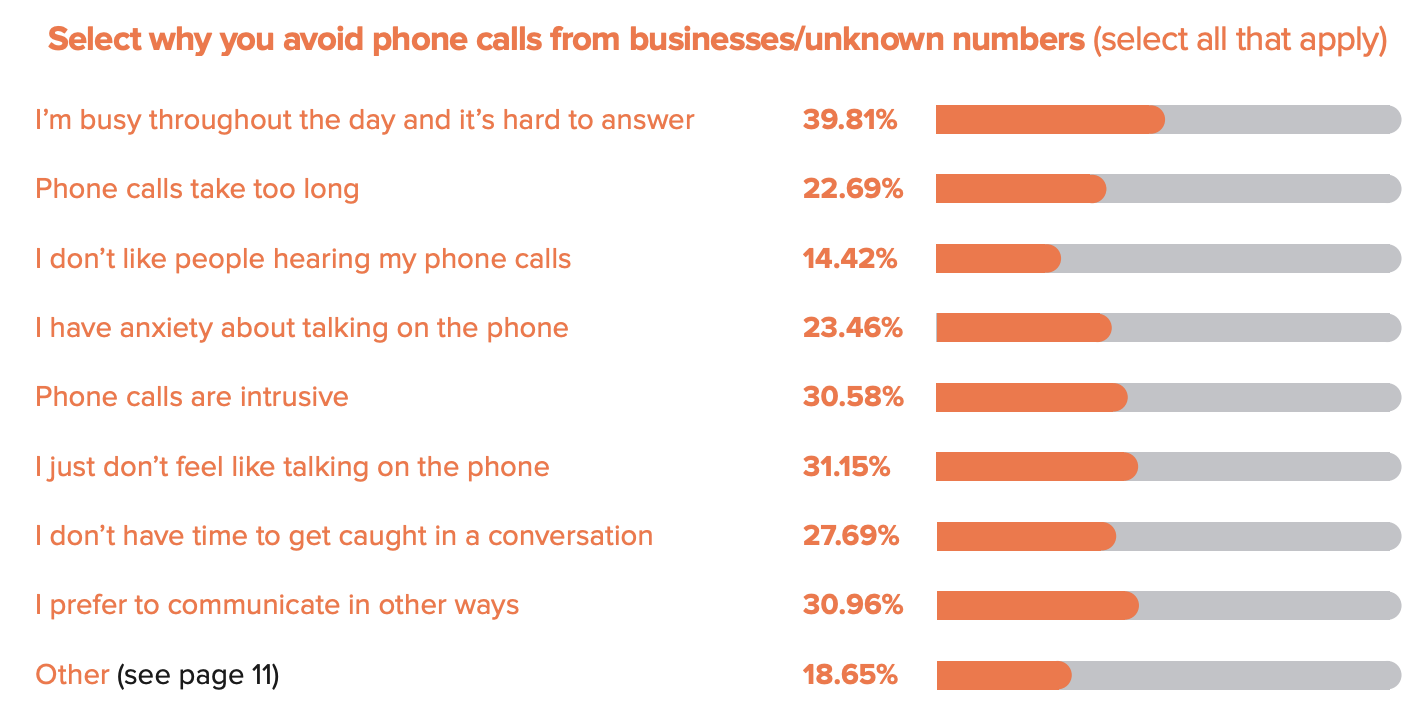 As you can see, the top four answers all center around one basic need: convenience.

People are busy throughout the day and don’t want to be interrupted, especially by an unknown number that could be a variety of different things.

Moreover, ZipWhip found that anxiety around phone conversations is on the rise — and this could be another motivator behind screened calls.

According to the study, 77% of people reported having anxiety over talking on the phone. 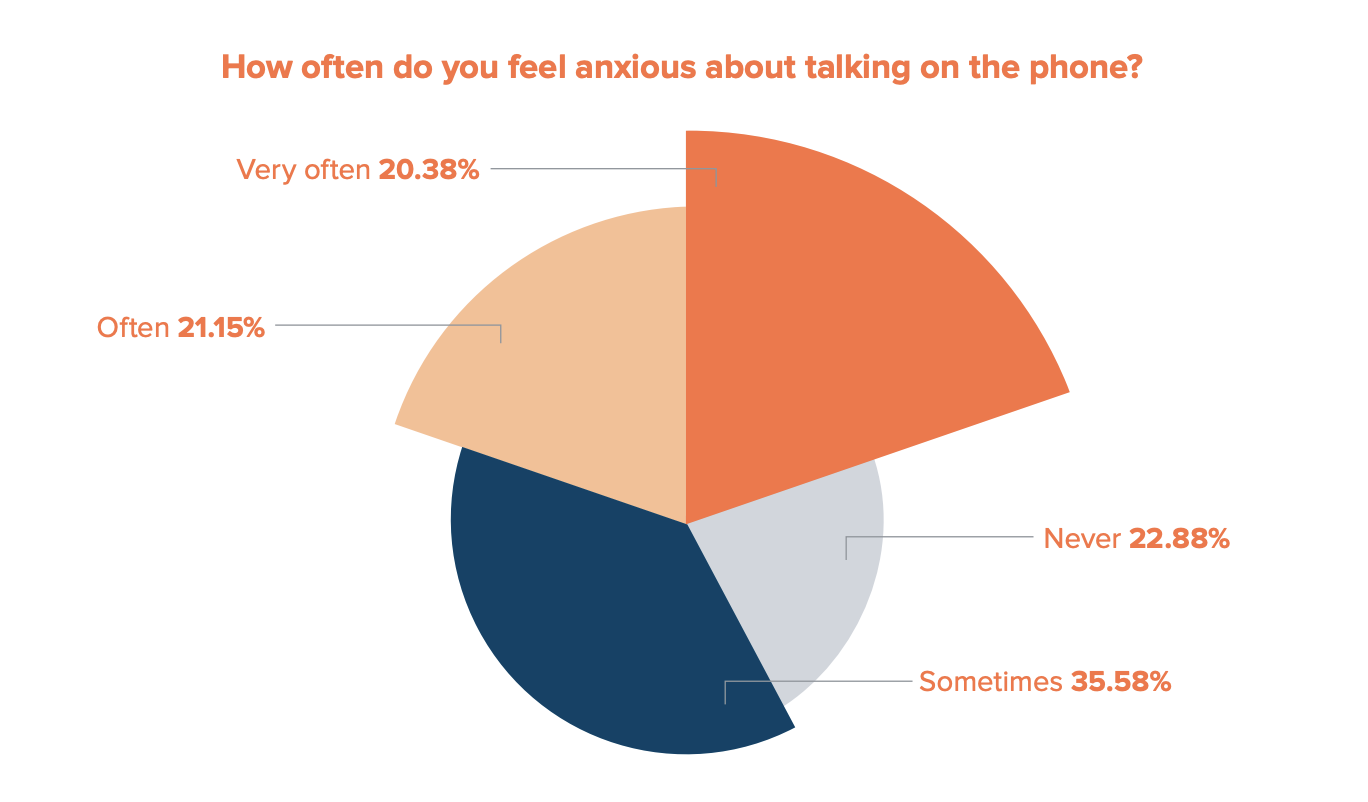 This finding may evoke eyerolls from professionals who talk on the phone frequently for work, but the reality is that today, phone calls are becoming more and more unnecessary for day-to-day communications.

While I believe that adequate phone skills are crucial to succeeding in most professional environments, crafting that skill does not come as organically as it once did.

People can make appointments, place orders, and communicate with friends and family without even saying a word out loud. Texting and email give people the ability to fully process what’s been said and clearly think out their response, so it’s understandable that people, specifically millennials and gen-Zers, feel more “put on the spot” by phone conversations.

Phone calls seem so intrusive now. I'm terrified of calling even friends for fear of interrupting. And RECEIVING a call? What would I SAY?

This level of phone anxiety has become so widespread that it can be seen as rude to place calls unexpectedly.

Send a text first. Then call.

You don't just go barging into people's spaces without notice.

Send a text. Confirm what time is good for a call. Then call.

And if they ask you to text, then text.

Again, if people feel this way about friends and family, it doesn’t bode well for your brand to be calling people out of the blue from a number someone has never seen before.

Of course, ZipWhip didn’t just determine “people hate phone calls” and leave it at that.

Instead, it dug into how consumers actually prefer to be communicated with that could “replace” cold calling efforts.

According to ZipWhip, texting is a more favorable method of communicating for consumers’ interactions with both friends and family and brands, reporting:

“Customers view texting in a positive light. It’s a convenient, immediate and concise way to communicate. A text can be sent quickly and securely with very little effort. And while phone calls will always have their place as a way for individuals to stay in touch, when it comes to business practices, texting is becoming the preferred method of communicating. “

The data backs this up as well. While many consumers will have a large number of missed calls at a given time, ZipWhip found that 74% of participants typically have zero unread text messages. Additionally, researchers also found that 74% of respondents said that they’d respond to a text from a business within the hour if interested. Then, if they want to set up a call, it’s on their terms, and they have more context into the conversation beforehand.

Still, ZipWhip reports that only 39% of businesses use some form of texting to communicate with customers, despite nearly 64% saying that they see the value of texting communication.

While I don’t have doubts that texting customers is more effective than cold calling, as I picture the awful world where I’d be getting as many telemarketing texts as I do cold calls, I’d encourage brands to proceed with caution. Otherwise, phone carriers will need to start creating a “junk” inbox for these efforts.

In other words, this is a good thing as long as us marketers promise not to ruin it!

For me, I’ve started getting texts for new promotions for products I’ve previously purchased, and only have to respond with “Y” if I’m interested, or a “STOP” if I’m not. At the very least, it gives businesses more data to see if people are just ignoring because its a random number, or if they’re simply not interested.

Personally, I find this so much easier and more helpful than getting scary “unknown” or random numbers calling me throughout the day, and it leaves a more positive feeling about that brand.

Why businesses need to adapt

Today, we have so many options to communicate with one another, so preferences are changing.

For example, it used to be exciting when someone rang your doorbell, but today it’s downright terrifying. (Is that just me?)

Businesses need to understand that in order to reach more people, they have to not start off the engagement on a bad note. This means adapting their communication style to a way that will be seen by the user as more positive and less intrusive.