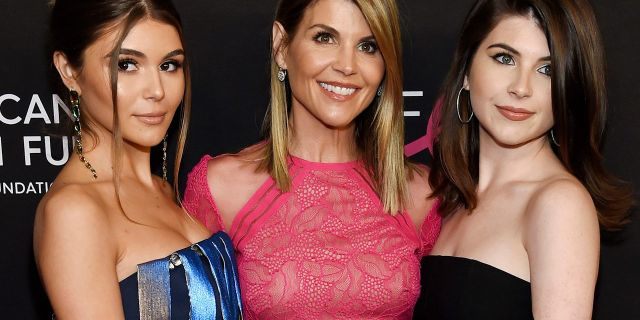 Unless you’ve been living under a rock for the past few days, you’ve heard about “Operation Varsity Blues,” the uncovered college admissions scandal where wealthy families used bribes to get their children accepted to elite universities.

Although there were over 50 people charged with connections to this scandal, a lot of the fall-out has centered around the involvement of actress Lori Loughlin and her daughter (a social media influencer) Olivia Jade Giannulli.

If you’re unaware of the story, Lori Loughlin and her husband Mossimo Gianulli are accused of paying $500,000 in bribes to get their two daughters admission to USC.

Both girls are still students at the school - but their youngest daughter, Olivia Jade, has quickly become the “face” of this controversy, due to her large social media following.

The 19-year-old social media influencer is known for beauty and fashion videos on her YouTube channel, which has almost 2 million subscribers. She also has an equally impressive audience on both Instagram and Twitter which has lead to many brand deals from big companies including Sephora, Amazon, TRESemmé, and HP, among others.

After new of the scandal broke, many of these companies faced backlash from the public, urging them to cut ties with Olivia Jade as a result of the allegations.

While there are many, many lessons to be learned from this scandal - we’re here to talk about marketing.

These events go to show the risk brands take when having public figures endorse products and also reminds influencers of the importance of trust and maintaining a public image.

The Lesson to Marketers: Choose Your Influencers Wisely

While Olivia Jade wasn’t charged as a conspirator in the case (and it still hasn’t been confirmed she was aware of the alleged conspiracy), that hasn’t stopped the public from taking action against her and the brands she worked with. 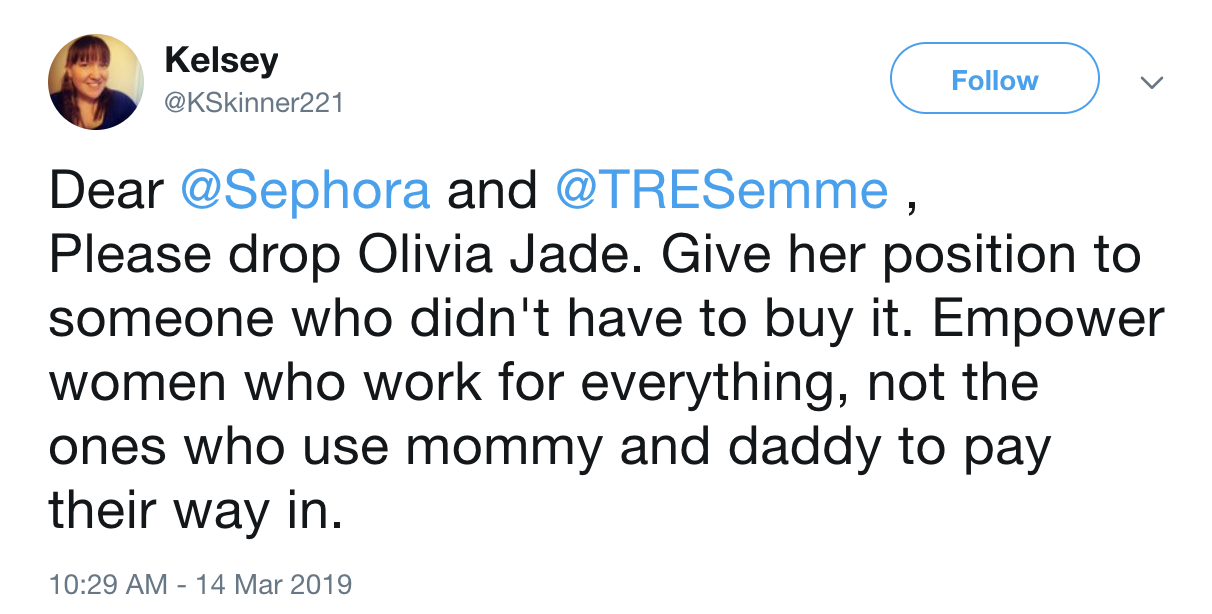 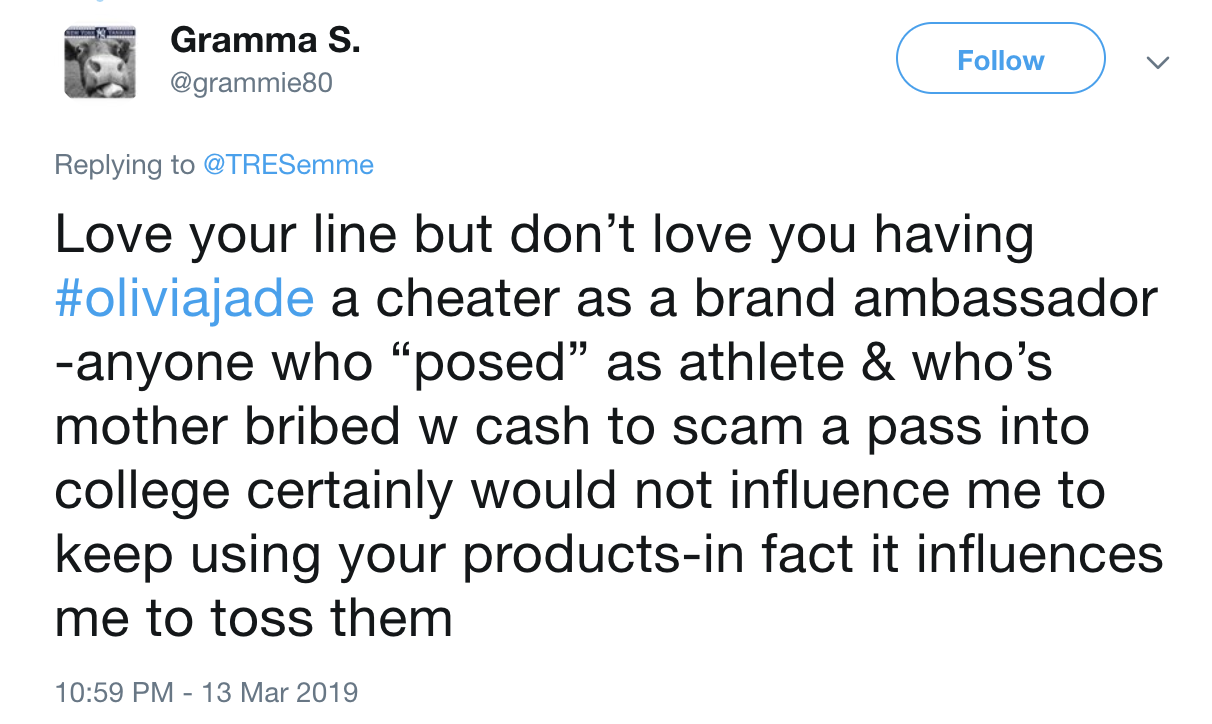 In response, Sephora announced on Thursday that they’ve decided to end their partnership with the influencer, “effective immediately.” They’ve also removed the “Olivia Jade x Sephora Collection Bronze & Illuminate Palette” collaboration product from their website after a slew of negative reviews about the scandal from commenters.

“Remove this product immediately. She and her family should be ashamed of themselves, and so should Sephora if you continue to carry this product. I will never shop at Sephora again unless you drop this like a hot potato.”

Clearly, the brands are not at fault for what occurred, but unfortunately, that is a risk associated with influencer marketing.

While this is big news right now, this is far from the first Influencer scandal that has negatively impacted brand partnerships.

YouTube stars like Logan Paul, Laura Lee, PewDePie, and many other well-known figures have been involved in controversies that have put brands in a tough position.

Risk vs. Reward with Influencer Marketing

When a brand decides to partner with well-known figures, they’re associating that person’s public persona to with the values and reputation of their brand they’ve worked so hard to build up.

Typically, this is a good thing. Your brand has the potential to reach a bigger audience, and now has the “stamp of approval” by someone they admire.

This tactic has helped many companies build their reputation and boost sales, which is why it quickly become so popular.

But as we’ve seen with Olivia Jade, it can backfire quickly.

Bad press around a partner can put your brand at risk for being “guilty by association,” leaving your brand vulnerable to any criticism the Influencer faces.

The bigger the influencer, the more people you can potentially reach - but it also means more damage to your brand if a scandal occurs.

For this reason, many brands try and conduct thorough research about any potential partnerships to ensure the Influencer is “brand-safe” enough to endorse their products - but unfortunately, you can’t predict everything.

Before this news broke, she was about as brand-safe as they got. She was never involved in any controversy, has a likable personality, had the advantage of having a famous mom to boost her following. I mean..what could be more brand-safe then Full House?

My point is, brands can do their homework on a person, but there's no guarantee that a brand-safe influencer will stay brand safe for the duration of your partnership.

The Lesson to Influencers: Trust is Everything

That being said, there are also risks that come with being an influencer. Just like with brands, a simple error can have big repercussions when you live under a microscope as an influencer or thought leader.

Scandals arguably impact influencers more significantly than they would more mainstream celebrities because when you’re an influencer, your public persona is your brand.

Operation Varsity Blues scandal shows that no matter how polished your image is, one small mistake can cause the public to lose trust in you. Even in cases like Olivia Jade’s, where she’s not directly responsible for the activities of her parents, her reputation and audience’s trust in her has suffered.

This controversy also demonstrates why influencers need to be very careful about what they say and do.

Because social media is so personal, many forget that they’re sharing these thoughts with millions of people - and any content they put out into the world can come back to haunt them.

An example of this is the now infamous video of Olivia Jade talking about how she “really doesn't care about school” in a YouTube video.

#LoriLoughlin's daughter @oliviajadee admitted that she was going to school for the partying, not academics: “I don’t really care about school, as all you guys know.” | 🔗 Full story: https://t.co/CBfFEJe0s6. pic.twitter.com/A8LAuCz5kI

She later apologized for her comments, but it goes to show that whatever you put out into the internet is permanent and can be used against you in the future.

While there are definite perks with being an influencer, there is an enormous amount of pressure to stay “on-brand” and maintain the trust that got you where you are to keep your audience and your sponsorships supporting you.

Is Influencer Marketing Worth the Risk?

There’s no clear solution for the risk versus reward situation when it comes to Influencer Marketing.

A lot of times, it’s risk brands need to knowingly take on when engaging in paid partnerships with influencers.

Some brands are opting to work with micro-influencers as an alternative.

According to Forbes, Micro-influencers refer to people with smaller followings (between 10,000 and 500,000) but receive lots of engagement from their audience.

These Influencers tend to be more niche, which is great for companies who want to advertise to more targeted audiences.

Besides being less of a threat to your brand's reputation, they’re also more cost-effective than working with Influencers with larger followings.

Of course, the downside is you won’t get as much reach as you would when working with a bigger public figure.

Overall, there are clear pros and cons to any marketing strategy, and Influencer marketing is no exception. It’s definitely a risk, but it can reap high rewards as well.

No matter how strategic your approach is, no one can fully predict the future. Partnering with an influencer might very well be the best strategy for your brand, but it’s important to do your homework and prepare for the unexpected.

Here's how coronavirus is shaking up influencer marketing

Is 'influencer fatigue' signaling the end of influencer marketing?

How a micro-influencer’s 2019 holiday campaigns came to life: An interview with Michelle Zavodny