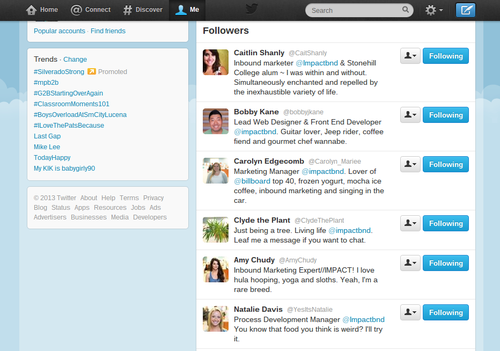 I bet all of you have this one friend that's infatuated with how many people are following him on Twitter.


Well, I have one of those friends.

bragging that the reason all these people follow him is because his tweets are so amazing. (We'll see about that.)


If you took a look through his following, you'll probably find more than half of those accounts following him are automated and the rest are people who always follow back.


These users are not following him because they are interested in what he is tweeting, they just want more Twitter followers.


For your business, Twitter can be an effective way to get people involved with your company. Through this social platform they can stay up to date with blogs and news.


It's important to have an appropriate Twitter following because otherwise you are wasting your time tweeting to people who don't care about your company.


There isn't a magic wand you can tap on your computer that will get you the followers you want. You can't just follow everyone and expect that all those people will follow you back.


One way you can get people involved and engaging with you on Twitter is by giving them an action to do. Invite these people to ask you questions and reply to your tweets.


Tell them to download an ebook that you created or to read a recent blog. Show them that you are there for their best interest.


If you are tweeting strong and relevant content, there is no reason why users won't engage with you.


Use @reply to respond directly to a consumers tweet. Start a conversation with them and show the consumer that you care about what they have to say.


A co-worker of mine wrote about 9 Big Brands that Will Actually Engage with you on Twitter. This showed that successful companies are all engaging people on Twitter. It's an easy way to develop a relationship with your followers.


Your company should make social monitoring a huge part of your social media strategy. Interact with them "socially." Your followers want to receive responses from you. If they didn't, they wouldn't have tweeted at you in the first place.


In the tweet above, Coca Cola replied with a fun response, they showed that they actually pay attention to the people that tweet at them. And, it wasn't an automated response that they could send to everyone. They personalized it.


Follow people that are in your industry, and interact with them. Don't just follow them. They most likely aren't going to follow everyone that follows them. Interact with them to get noticed and start building a relationship. Consider sharing and favoriting the content they're posting. See what kind of content your industries thought leaders are posting and engage with them.


For example if someone writes a great blog, tell them how much you liked. Let them know what you took from it and share with your audience.  tweet at them telling them you enjoyed it and took some great tips from it.


Try to get them to retweet you, I can't stress enough how important it is to post strong and remarkable content. People will want to talk to you if they like what you are writing about.


Try to build a relationship with them so they feel comfortable spreading your content to their followers.


Using automation would be like if you were having a conversation with someone and they listened to you but you didn't listen back.


Let me explain myself a little more. It's like when you're calling your credit card company or another company and that automated promoter picks up. Push 3 for XYZ. That's pretty annoying. What about when you have to answer yes or no? You end up looking like a crazy person screaming yes! every 5 seconds. All of that would be avoided if an actual person answered the phone.


I doubt that person would want to have another conversation with you. The same concept is true for Twitter. People will stop following you if they believe the account is automated or they don't feel like you are "listening" to them.


A lot of companies use these tools because it's an easy way to consistently get messages out to your audience. The problem with this is followers can tell these messages are automated.


Do you have an automated response set up? If so, you might want to remove it. If the person tweeting at you keeps getting the same message over and over again, they are going to know, obviously, your company is not personally responding.


Unfortunately, this shows the user that you don't care about them.


Personalize your messages to those people, if you show them individual attention they will want to come back to your company. Consumers like the sense of human contact, not a machine.


What does this all mean? Even if you have a large following on Twitter it is not necessarily going to help your company. You need to make sure that the people following you actually care about the content you're putting out.