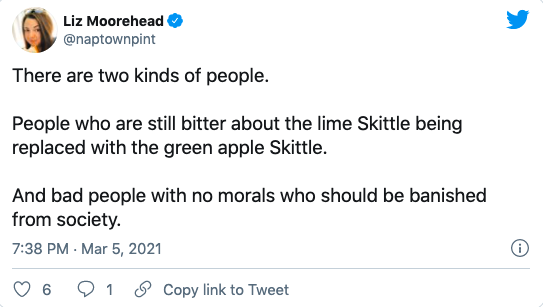 OK, maybe I haven't changed that much. Whatever, I still stand by the above point, so let's move on, shall we?

Although my social media-based rantings and ravings haven't really demonstrated the personal growth and evolution I like to convince people I've attained by my (now) late 30s, the platform itself has changed a lot.

It's changed for better, for worse, and for the entirely forgettable. 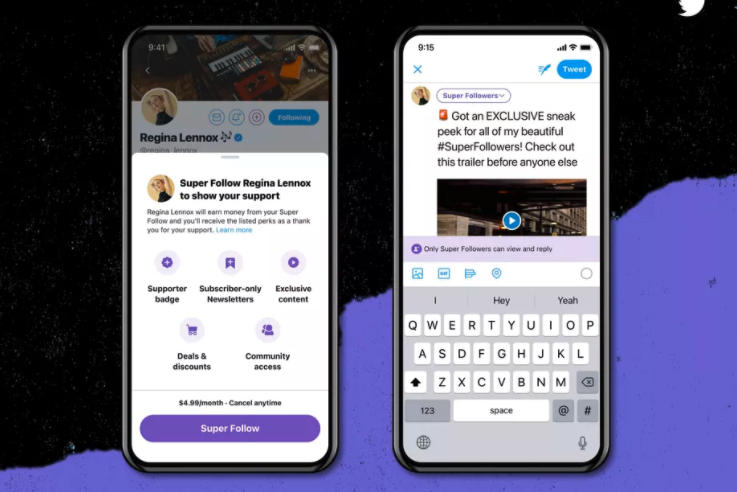 If you've heard of Substack or Patreon – and/or you were left scratching your head at Twitter's recent acquisition of Revue (an email newsletter monetizing platform) – Twitter's (a little too) literally named Super Follows move makes a lot of sense.

Apparently, Twitter says this will be a source of potential revenue for the social media giant, which has always struggled to cement the platform's societal relevance (good and bad) with a stable bottom line. Still, there is no word on what the fee for Twitter might be from users or brands leveraging Super Follows.

Why should you care about Super Follows?

Reporting is a little unclear as to whether this will be available to brand accounts or individual, human creators. If it is going to be available for accounts of all types, this could be a great avenue for brand publishers to explore if you have a large audience on Twitter.

Additionally, if you have a thought leader (or thought leaders) at your company who have strong personal brands and a following, you could leverage Super Follows to monetize their accounts as brand ambassadors. (Just don't be a butthead who doesn't disclose that clearly.)

Keep in mind, however, that managing your brand community online is already quite a tricky undertaking. And, if you're asking for money from subscribers of any kind, you're going to have to deliver something of value.

According to Gen Zers, as an older millennial born in 1982 (since Gen Y was quickly discarded as an option in the 1990s), I side-part my hair, wear skinny jeans, and still think Facebook is cool. To be fair, they're not wrong. (Fun fact, youngins'! Side parts are a great way to hide appalling amounts of gray hair sprouting like weeds from your center part.)

Yes, hip kids, I am on Facebook. And, like many of my ancient millennial, Gen X, and boomer fossil brethren, I am super into Facebook groups based on my personal interests like The Rewatachables, IMPACT Elite, Kickass Humans Club, countless online yard sale groups, and many, many more.

Mostly because, after stealing the Stories feature from Instagram (stolen shamelessly from Snapchat) and rebranding them as "Fleets" (ugh), Twitter has now yoinked the Facebook Groups product and rebranded it as Communities: 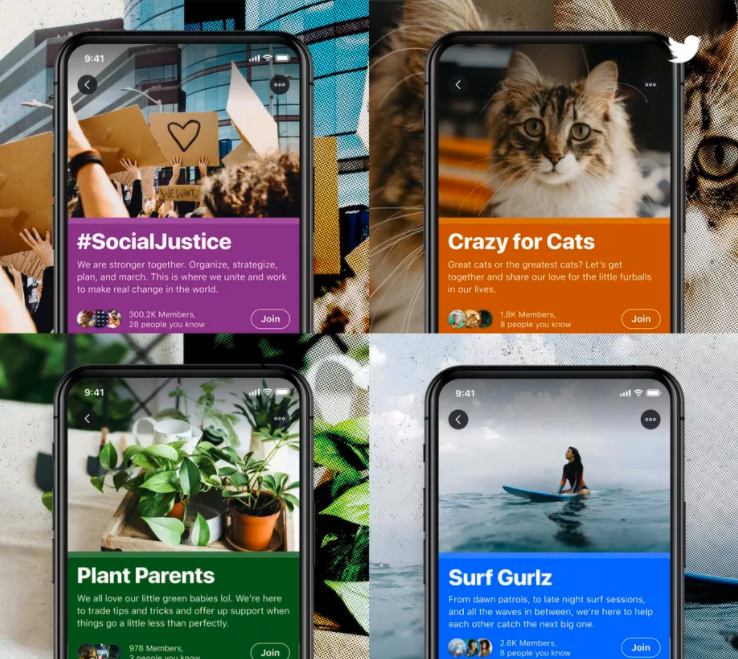 As a note, I will never join Plant Parents, because my friends jokingly call me a "hospice for houseplants" for good reason.

There's really not much else to report on this product announcement, as they haven't said when this new feature will arrive and it's pretty straightforward.

Why should you care about Communities?

Look, cool or uncool, Facebook Groups have become a surprisingly steady anchor for branded and unbranded interest-based online gatherings alike. Yes, the jury is still definitely out on whether or not that kind of digital community magic can or will transfer to Twitter, but that doesn't mean we shouldn't be keeping an eye on it.

They try to do something nice, and Twitter users remain always at the ready with an ungrateful attitude and a full arsenal of roasting memes... 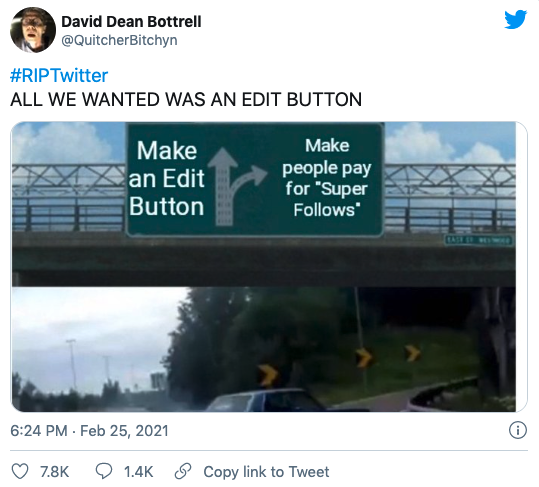 Although, to be fair, they now consider it a sign they're doing something right when that starts trending: 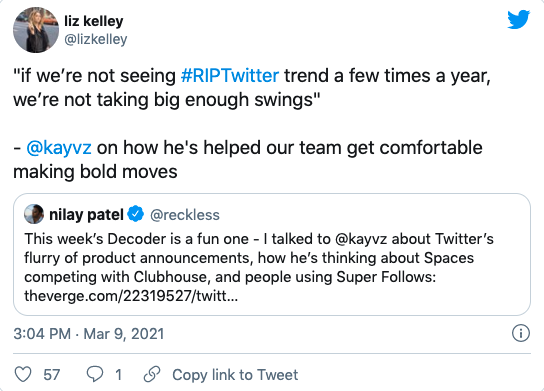 But to David's point, the edit function is the one thing a large portion of the Twitter user base has been outright begging for, for years. And, if a recent rumor is to be believed, Twitter is beta-testing a new feature that may put a band-aid on that request...

OK, personally, I'm very much against the idea of an edit function. To me, having the ability to go back and edit an already published tweet flies in the face of the purpose of the platform.

Moreover, now that Twitter (whether we like it or not) has become a primary source of official statements, breaking news, and other noteworthy moments, I like the purity of a Twitter personality (a politician, a brand, whatever) having to stand behind their words without the ability to go back and make changes.

That said, I do not hate this rumored undo function... 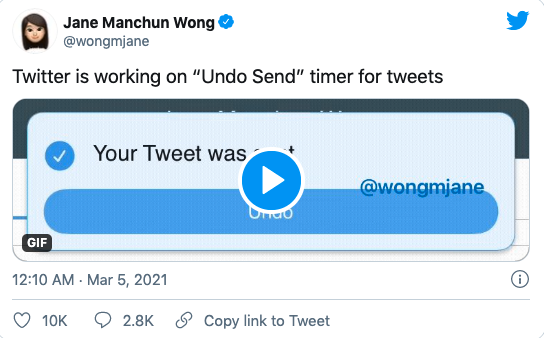 ...and it seems like a nice compromise for pro-edit function Twitter users and curmudgeon-y old farts like me who just want to watch the world burn when an influencer has a meltdown over a tweet they sent out with a typo, but they can't delete it because the engagement metrics are too high.

Really though, again, it's all about preventing stuff like this: 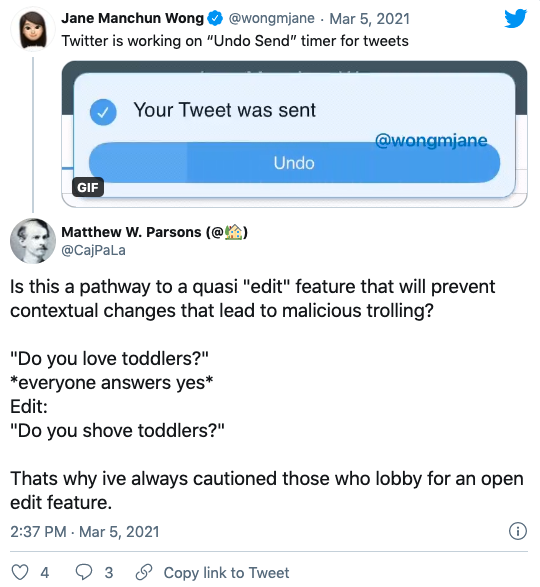 OK, shoving toddlers is a little extreme. But think about it – how many brand publishers, news outlets, and other websites leverage the "embed" function from social media networks to embed posts from brands, politicians, and others?

Now, what would happen if the original authors could go back and revise tweets to potentially make themselves look better, if they received backlash about a particular announcement or statement?

Whether we like to admit it or not, that's an ethical gray area, and I believe it's best to just let those statements remain as they were.

My social media soapbox aside, (once more with feeling) it's unclear right now as to whether or not Twitter has confirmed this is a feature on the horizon. There's also some speculation that this could be a paid option, but at this point... ¯\_(ツ)_/¯

My recommendation for now? Prepare a new batch of #RIPTwitter memes, accept that some of your Tweets are just going to have errors in them, and wait for the next round of announcements proving that all social media platforms are, slowly but surely becoming exactly the same.

Speaking of which, has anyone heard when Google Docs is going to roll out a Stories feature? I really want to add a dimensional brand and personal storytelling element to the never-ending hellscape that is the spreadsheet experience.