An Inch Short of a Sandwich: Subway and the Power of Social Media 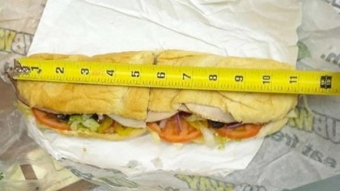 Give them an inch and they'll take a mile (or just your foot long sandwich).


Over the past few years we've seen a couple ways that social media has affected companies, and just two weeks ago, yet another company was challenged in a huge way.


Subway is known for it's footlong sandwiches, but when Matt

Corby of Australia bought his sandwich, it didn't 'measure up' to standards. His 'footlong' sandwich was only 11". Corby took a photo and posted it to Subway's Facebook... and it made worldwide news. (No wonder Jared lost all that weight... he was only eating 11" subs.)


Social media has become a way for people to hold brands accountable and just like Domino's in 2009, Subway's image was damaged with the use of social media.


It's happened before, and it'll happen again... so how much power does social media really have? And what can you learn from these events?


The Massive Power of Social Media


Although Corby's post to Subway's Facebook was deleted, reports say that over 131,000 people shared and liked his photo... not to mention the fact that people took screenshots and have been writing about it all over the Internet (like me). Plus after the word spread, people started to post their own photos of subs that 'fell short'.


Social media can be a great way to connect with people and share positive stories, but there's a huge downside to giving people so much power. Negative word of mouth has become the hardest type of marketing to control with the creation of social media sites. People are occasionally willing to share positive stories, but are more likely to share negative experiences.


Regular people have so much power now, and companies must be held accountable. Back in 2009, even when social media was less popular, Domino's had a serious problem. After two employees posted a disgusting video while at work, Domino's image was seriously hurt. In just three days over a million people viewed the YouTube video.


Stories like these show that even huge companies like Subway and Domino's can be challenged by the most common people.


Social media can be a powerful tool for people, and just as powerful for a company. Once an incident happens, companies have a captivated audience where everyone's waiting for a response.


Subway took the route of issuing a formal apology. "For 47 years, customer satisfaction has been our top priority. We regret any instance where we did not fully deliver on our promise to our customers... we have redoubled our efforts to ensure consistency and correct length in every sandwich we serve."


Although Subway did respond, it wasn't on any social media sites. They assured customers that they would fix the problem and maintain their standards (which is the main point), but no post was made about it. As I said before, the photo was deleted, and the situation seemed to be averted.


Domino's, on the other hand, responded immediately with a YouTube video in response; because what better way to respond to an incident on the exact site people saw it on.


So, basically, if your company gets called out on social media, the best thing to do is respond on social media. You'll reach all the people that heard about the post, and assuring them you are handling the situation appropriately.