Twitter has launched “Timing is Everything,” a new publisher insights tool that provides real-time user data to help businesses have more success on the platform, specifically with video.

Back in January, Twitter reported that it was developing a new kind of analytics dashboard to help publishers not only analyze their own performance, but also offer insights to help them understand what kind of content is resonating with readers.

Timing is Everything is the first we’ve seen of these new additions.

As with most platforms, video is quickly becoming Twitter’s most widely-consumed style of content. Twitter has stated that videos are six times more likely to be retweeted than any other style of content, making them a more sharable asset for brands to utilize in their own campaigns.

What Is Timing is Everything?

Timing is Everything lives in Twitter’s Media Studio, a hub where publishers can schedule posts, view analytics, and monetize their tweets. It goes beyond typical social media analytics, providing data that can help inform organizations' strategies and better engage users.

“Timing is Everything displays historical data showing when audiences are on Twitter watching and engaging with video.”

“This data highlights the best time(s) to Tweet video content with an aim to maximize engagement, conversation, and viewership.”

On social media, timing really is everything, so having access to peak engagement times can really help publishers reach the most people while they’re active on the platform.

Specifically, having access to data around when users are engaging with video content is valuable because video captivates attention in a way other media formats can’t compete with.

Because users tend to watch video only during times when they cancommit their attention fully to the content, knowing when users are actually watching video allows brands to make the most of their efforts by sharing their video when they have the greatest chance of being seen.

Here is how it will appear on your dashboard: 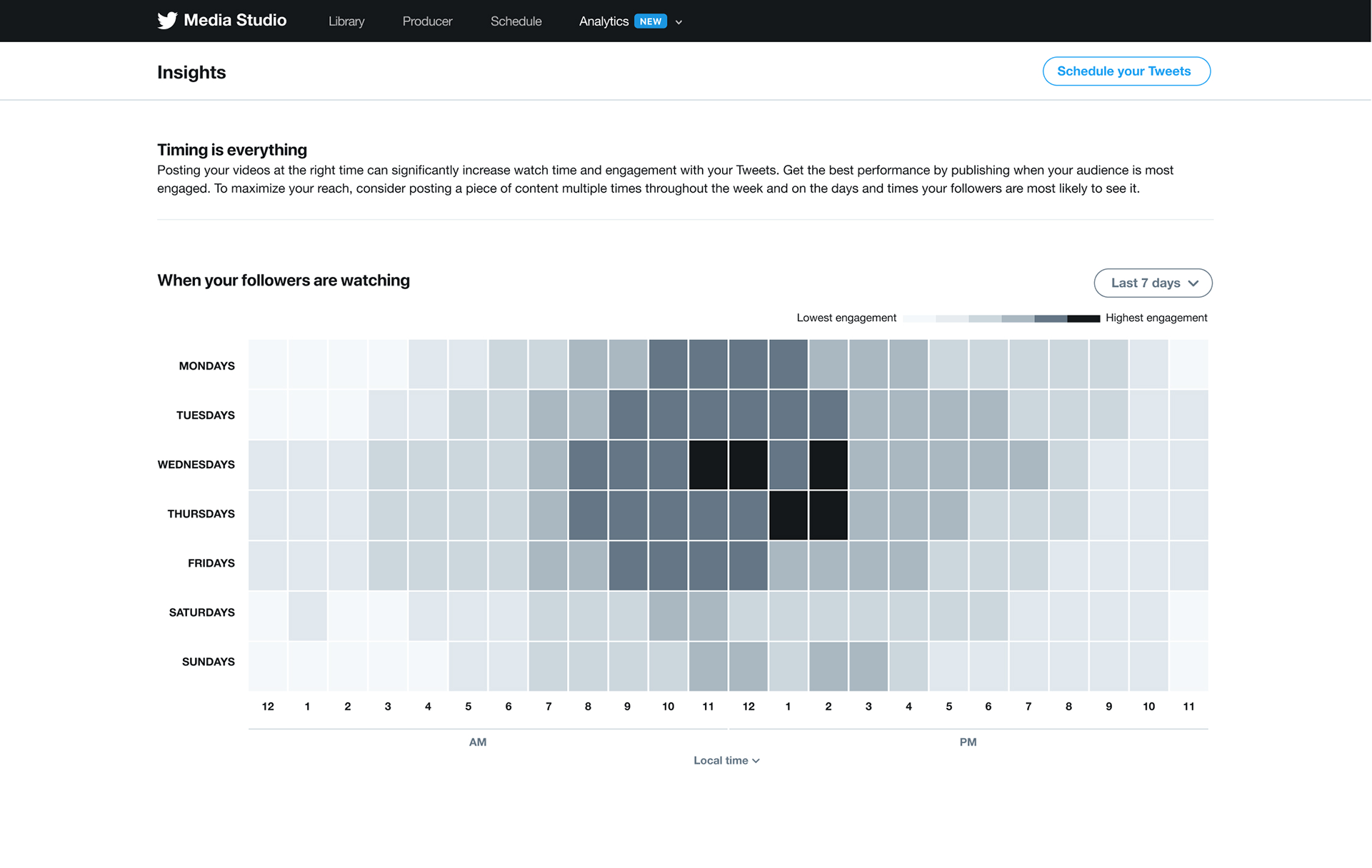 One thing that’s important to note is that despite the bolded text reading “When your followers are watching,” the tool does not measure your account's unique follower activity; instead, it shows peak engagement of Twitter’s user base as a whole.

While the large user pool provides more significant insights on average user behavior, peak engagement for your followers may be a bit different based on your industry.

For that reason, Twitter encourages publishers to continually post during various times of the day and week in addition to these peak activity hours, and see what’s driving the most success for you.

In other words - don’t just follow these insights blindly; test, analyze, and repeat to draw your own conclusions.

Twitter's intent in sharing this data is to help brands better understand how the average user engages with the platform. Take the data available in Timing is Everything as simply a jumping off point for testing as you would any other industry benchmarks.

How to Get Started

Based on the announcement, we can expect more tools to be rolling out in the near future to compliment Timing is Everything. Stay on the lookout for more updates!