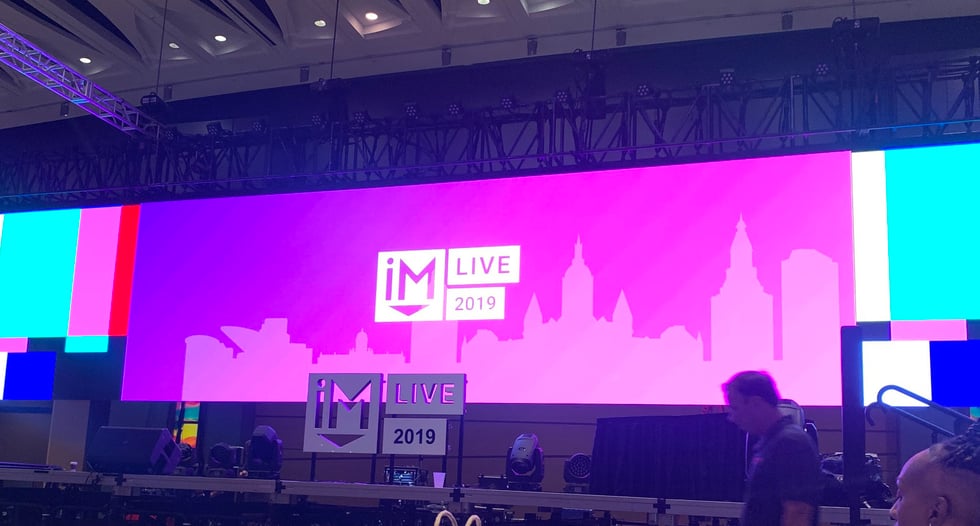 IMPACT Live, our annual conference (becoming Digital Sales & Marketing World next year) is about pushing the limits of what’s possible.

It’s two-fold because it pushes our clients to be the best organizations they can be, but it also pushes the IMPACT team to create an experience that’s second to none.

To accomplish that, it takes good old fashioned hard work. It takes our company’s core values: passion, helpfulness, and dependability.

Nothing personified that more this year than my biggest project, the opening video.

The first piece of content attendees would see at IMPACT Live was this opening video.

Therefore, it was crucial for us to make it as IMPACTful as humanly possible.

The theme of this year’s event was client success, more specifically clients that have implemented the principles of They Ask, You Answer successfully.

Our CEO, Bob Ruffolo, and I spent the last year traveling all over the country to capture their stories. It was truly an eye-opening experience.

With that in mind, we felt the best way to creatively set the tone for the event was to share their stories.

We wanted to demonstrate the real pain points they suffered as organizations and contrast that with the sweet success they found by implementing this program.

We knew that we had an obligation to not just tell but celebrate these stories with like-minded marketers.

Our goal was to inspire people and businesses. “If these companies can do it, you can too.”

I remember saying to Bob “I want people to feel like they are drowning in the first half of this video. Then, as the story shifts to positive, I want the sun to literally rise as we reveal this glorious warmth of success and happiness.”

In the end, we wanted the audience to feel empowered and motivated to take similar action.

Thankfully Bob was extremely supportive of my vision and let me run full steam ahead with it.

Creatively, I wanted people to feel complete immersion from this video experience.

I wanted them to feel the pain that these companies felt. I wanted them to connect on a genuine level with these business owners and say “I know exactly how that feels” or “I’ve been there before.”

That relatable factor would hopefully get them invested in the story we were trying to tell and the information we were sharing throughout the course of the event.

I knew the use of light, color, and sound would play instrumental parts in achieving those emotions, but more on that later.

How we brought it to life (under a nearly impossible deadline)

A video of this caliber would normally take months to complete.

Filming was complete, but the script would need to be storyboarded to ensure the art direction matched the creative direction.

Meaning, we wanted to ensure the artwork we created matched and further enhanced the story we were trying to tell.

The boards would then need to go to the design team to be graphically created and prepped.

All the assets would then need to come over to the video team for animation and testing. After all that, editing could finally begin.

Due to the creative direction and script, we didn’t need to actually film anything. Rather, we used previously captured audio from the case studies mixed with fresh graphic animations.

In an ideal situation, that process would take 2-3 months from start to finish, especially with its unique dimensions.

We had two weeks.

Yes, you read that correctly. We had two weeks to have the video finalized and ready to play in front of 1000 people at IMPACT Live.

Megan Lang, IMPACT’s Lead Post Production Editor, and I knew we needed to seriously focus, communicate clearly, and pray to the video gods as often as possible. Thankfully. they were in our favor.

Jokes aside we knew we didn’t have time to go through the proper steps to create this video.

So how could we achieve the same result? Ultimately it came down to communication with the key creative decision makers. In this case, Bob was that person.

We stayed in close communication through literally every step to ensure we were all on the same page.

I’m not going to lie, it was messy and overwhelming at times. However, in that mess, we learned a lot about ourselves and each other.

There is absolutely no way it could have been possible without the help of Bob, Megan, our VP of marketing, Kathleen Booth, and the entire team at Shoreline AV. They each played a crucial part in us moving through this expedited production process.

Also, I have to give a shout out to Tom Discipio for his recommendation on using “Right Now” by Van Halen. It became the theme song for the entire event. Great call, buddy! :)

Bob was the driving force that challenged us to make the impossible, possible. Without his passion and dedication to hold us accountable, this project wouldn’t have happened.

Kathleen developed and wrote the script that would become the backbone of the entire project.

She painstakingly watched each and every case study video we created to find the perfect quotes needed to tell a compelling story.

She then creatively contrasted the before and after results of They Ask, You Answer to demonstrate the power of what it can do for your organization.

Megan was our editing grandmaster on this project.

Her dedication and passion toward animating this video was beyond anything I’ve seen before.

Animating a video at this length and complexity is difficult even for the machines we use to create them. There were multiple times her computer crashed or couldn’t render the number of layers we implemented.

It forced us to get creative in making workarounds and other ways to get the machines to work in our favor.

Last, but certainly not least, I have to thank Shoreline AV for all that they did in accomplishing my overall creative vision for this project.

I wanted it to be an experience, not just a video.

To do that, I wanted to tap into all of the senses and create an environment rather than just stimulating visuals on a screen.

In order to make that a reality, the sound design, and lighting design needed to be top-notch.

We spent hours designing the lighting to match the video. Therefore, we used muted and cooler colors in the first half of the video to personify the pain, then changes to warmer tones as the success stories emerge.

Their efforts set this project over the top.

You can check out this low quality preview I snagged with my cell phone to see how much lighting design enhanced this video: The most rewarding feeling a filmmaker can have is to hear this “that video gave me goosebumps and chills.”

I was so humbled to hear attendees, sponsors, and even IMPACT team members saying exactly that.

That’s why we do what we do!  This was an extremely challenging project, but hearing those reactions made it clear that all of our hard work paid off.

As a creative, to evoke emotion is the ultimate goal. I hope we accomplished that here and inspired attendees to see the positive power They Ask, You Answer can bring to their businesses.

How to do small business video marketing