18 Brands Trying to Catch ‘Em All with Pokemon Go Newsjacking

Are you Team Instinct, Mystic, or Valor?

If this question puzzles you, then you’re definitely not one of the over 21 million daily active users that Pokémon Go has been seeing since its release just one week ago.

In this short time, the augmented reality game by Nintendo and Niantic has seen over 6 million mentions on Twitter and approximately $1.6 million in-app purchases every day.

Frankly, it’s taken the world by storm and whether you’re a fan of the franchise or not, you’re likely taking notice of the phenomenon as well.

Brands, both big and small, are taking notice too.

Aside from the hundreds of brick and mortar small businesses benefiting from the foot traffic that comes with being named a “Pokéstop,” countless more are capitalizing on the trend with unique promotions, content, and news stories.

For those of you unfamiliar with it, newsjacking, as coined by David Meerman Scott, is “the art and science of injecting your ideas into a breaking news story and generating tons of media coverage and social media engagement” as a result.

It's about appealing to your consumers's interests and using them to stay relevant and top-of-mind.

We’ve seen this tactic used with Star Wars, the Oscars, and the Super Bowl among other events, and now, it’s Pokémon Go’s turn.

Below are 18 examples of brands and media personalities that have cleverly “newsjacked” the game’s popularity and used it to appeal to their audiences and even boost sales.

Take inspiration from them for your campaigns or let’s be real -- just enjoy scrolling through them as your phone charges for your next poke-walk.

Probably the most prominent brand newsjacking Pokémon Go is T-Mobile. On Thursday, the mobile carrier announced that as a part of its ongoing T-Mobile Tuesdays campaign, it will give customers:

T-mobile hopes to win over new customers with these unique and playful perks, but we’ll have to wait until July 19th to see if it really helps it “catch ‘em all.”

CEO, John Legere took to Periscope to share the news:

LIVE on #Periscope: @TMobile CEO: T-Mobile Tuesdays is going all in on PokémonGo!! #CatchEmAll https://t.co/WFIsvX8DQD

In a simpler approach, Cinnabon capitalized on the Pokémon Go craze with the help of user generated content and some clever copy. Looking for Pigeotto and a snack? Cinnabon has both!

We usually don't let Pokémon into the bakery, but he forced himself in. #GottaEatTheBuns #PokémonGO https://t.co/LpKyIYeocn

Now, here we have the post that inspired this article.

Shortly after Pokémon Go took the scene, Erin Stewart, the mayor of New Britain, CT (and at 29, the youngest serving female mayor in the US) shared this map on her Facebook page. 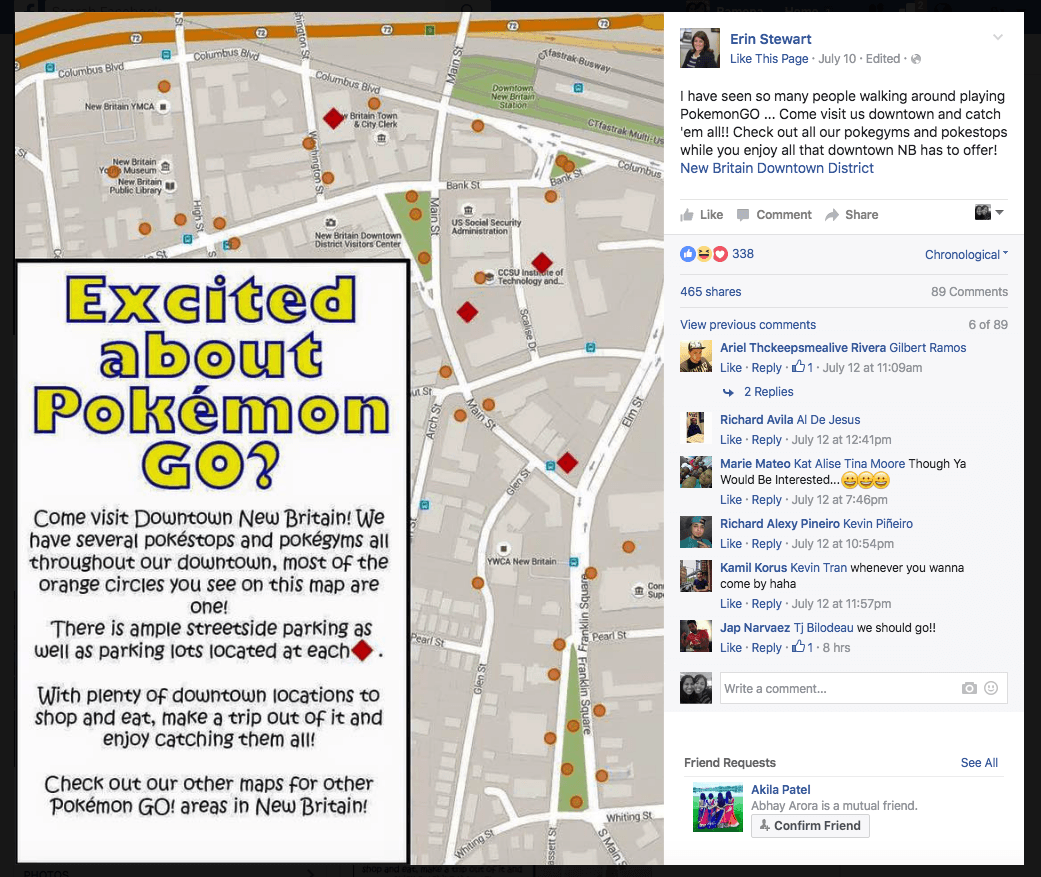 Along with pointing out the city’s many Pokéstops and Pokégyms, Stewart encouraged people to “make a day out of it” visiting the area’s restaurants and shops.

While people of all ages are entranced by fictional Pokémon, the Smithsonian Institution used this interest to draw attention to it’s Ocean Portal.

In this clever tweet and article, the organization highlights popular Pokémon alongside their real-life doppelgangers that can be see live at the Natural History Museum’s Sant Ocean Hall.

Instead of using a traditional press conference or press release, the Vancouver Whitecaps, a professional soccer team from British Columbia, opted to reveal its latest two recruits by “catching” them in Pokéballs in a short online video.

For those of you familiar with the game, you know that it requires a great deal of walking to get the most out of it.

To capitalize on this core feature, an Animal Shelter in Muncie, Indiana started a volunteer program called “Pokémon Dogs,” urging people to combine their daily hunts with a good cause -- walking the shelter’s dogs.

As of right now, the post on Facebook has over nine thousand likes and 28 thousand comments and over 240 people have participated.

7. Walk for a Dog’s WoofTrax

On a related note, Walk for a Dog, an organization that partners local animal shelters and rescue groups with financial donors, has started a similar campaign, encouraging people to download and run their app while walking playing Pokémon Go. The app runs concurrently with the game, tracking how far users walk. The more miles users walk, the money donated to local shelters in need.

While not entirely newsjacking, Yelp is nevertheless staying on top of the Pokémon Go trend asking users "Is there is Pokéstop nearby?" when checking into some locations. 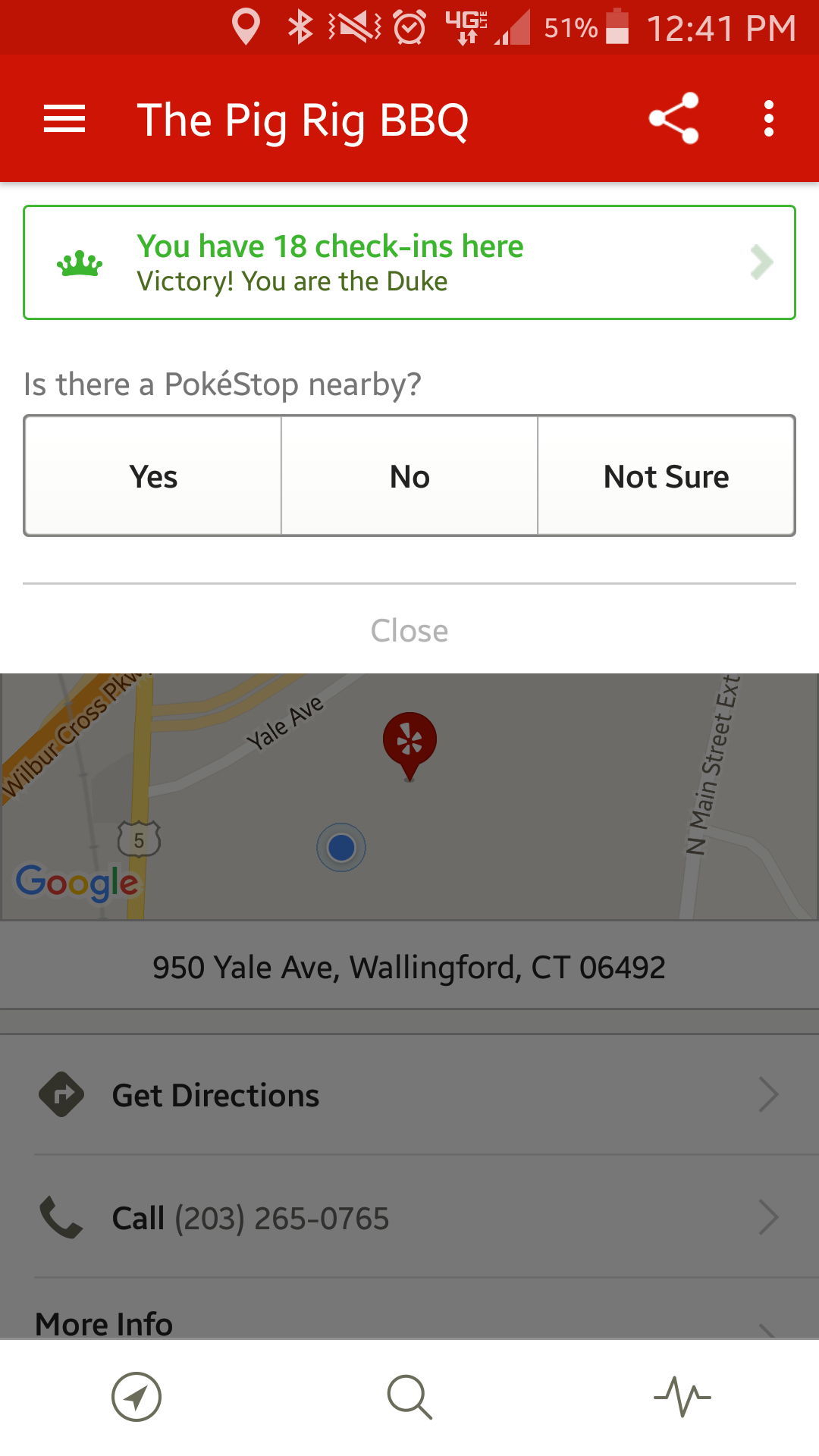 Looking for new, exciting places to find Pokémon? The Texas Rangers’ Globe Life Park is calling your name. The professional baseball team wants you to take in a game or go on a ballpark tour. There will be plenty of Pokémon waiting for you.

Forget life insurance or holiday bonuses. If your office isn’t near a Pokéstop, maybe it’s time to start looking for a new one --- at least, that’s the idea Monster is trying to plant with this tweet and it’s here to help.

When you get to work and you don’t see a Pokéstop… #PokémonGO pic.twitter.com/gNIETIRWYN

Like the Rangers, the Houston Rockets is another sports team trying to appeal to its Pokémon Go-ing fans with some creative marketing. In this example, the professional basketball team organized a three-hour “meet up” outside its home at Toyota Center, where fans could enjoy playing the game as well as 50% off merchandise at the Rockets Shop.

We're hosting a #PokémonGO meetup tomorrow at 11AM outside @ToyotaCenter!

Following T-Mobile's lead, Sprint is reaching out to Pokémon Go fans by unleashing "lures," a tool in the game that attracts Pokémon to a specific location for 30 minutes, at its retail stores and Boost Mobile locations. Once there, users will be allowed to charge their phones and Sprint team members will be ready to offer game tips and hopefully close a few sales.

Infusing a bit of humor into its marketing efforts, Brandon Eye Clinic in Springdale, Arkansas is hoping to strike a chord with audiences by offering to improve their eyesight for Pokémon Go. "Is your Pokémon blurry? Let us have a Pikachu." 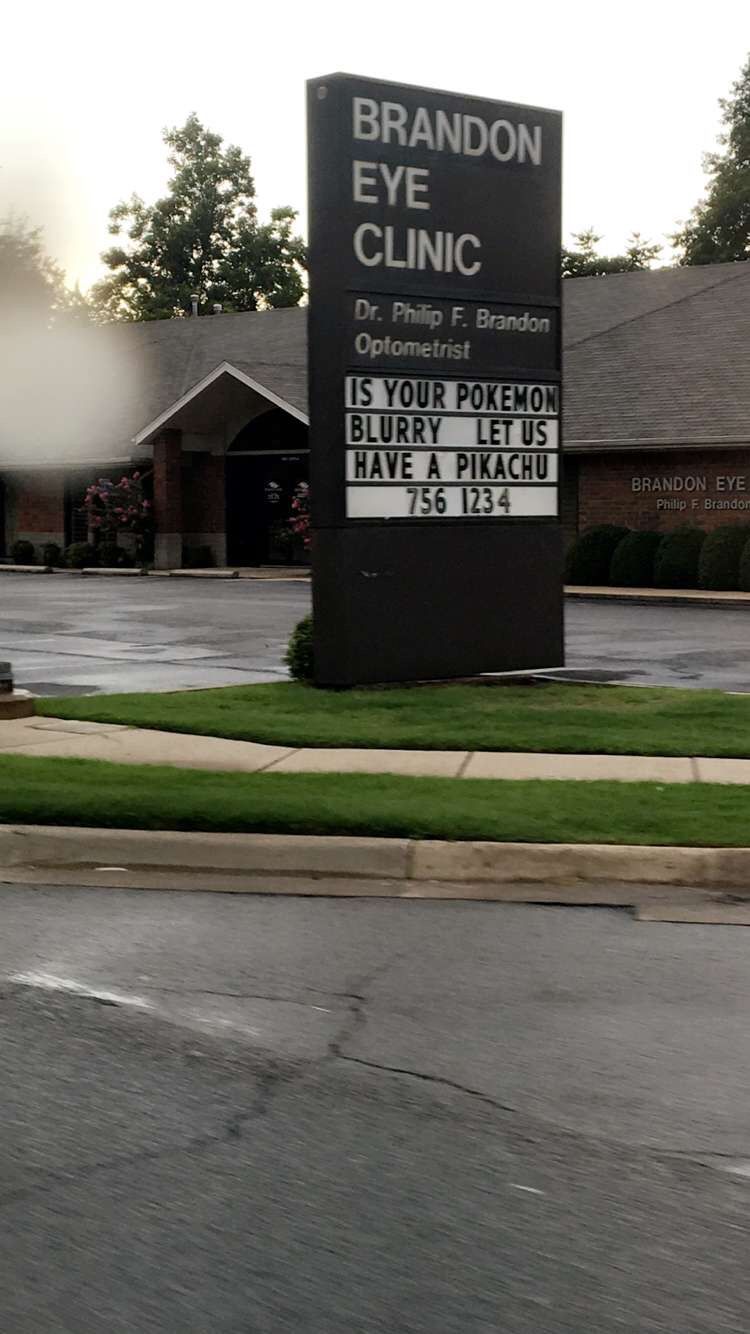 In this example, Ruby Tuesday sponsors a post showing a Pokémon perched next to one of its colossal burgers. Though a simple post, it is one that surely resonated with its fans, earning the popular chain over 1700 likes on this update alone.

If you’re concerned that Pokémon Go doesn’t fit your brand, think again. Even the Library of Congress is getting in on the fun, driving its Twitter followers to take a tour and meet a few new friends along the way.

Among the thousands of summer visitors to the Library's Great Hall #PokemonGO https://t.co/DSBk2uKMd6 pic.twitter.com/Nyab82SrvF

Most of us may not think about viruses or phishing when we're downloading apps to our smartphones, but Norton wants you to know there is a credible risk -- and it's using Pokémon Go to get its message across. 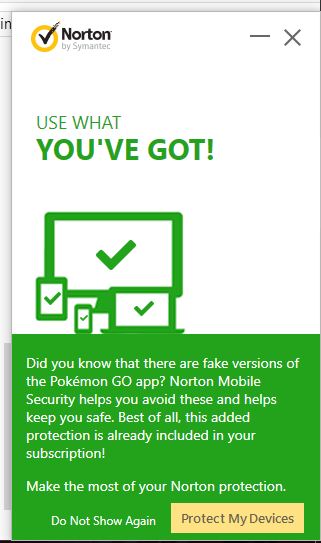 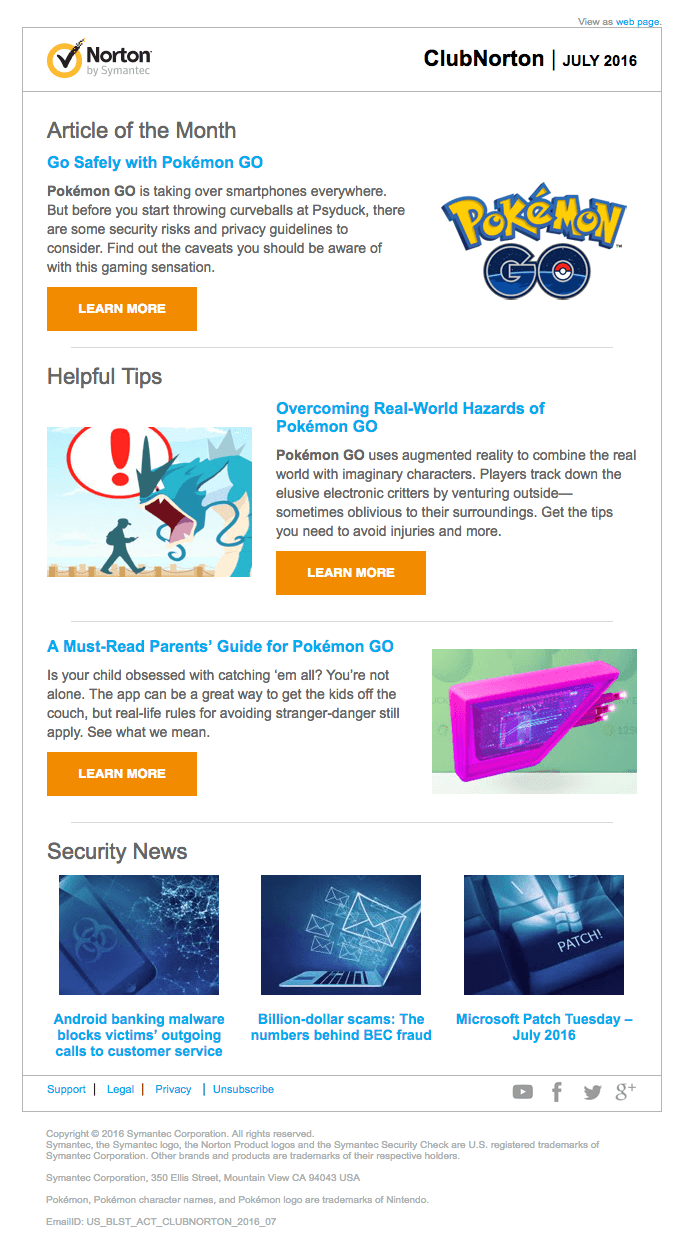 What's better than free wine? Free wine with a side of Ch -- armander.

Kids aren't the only ones playing Pokémon Go and this Connecticut liquor store is hoping to attract some of the game's older fans by offering a 3-hour lure module if you come in (and hopefully buy) during one of their product tastings. Since the game's release, the local business has already held four of these tastings and I wouldn't be surprised if they continue! 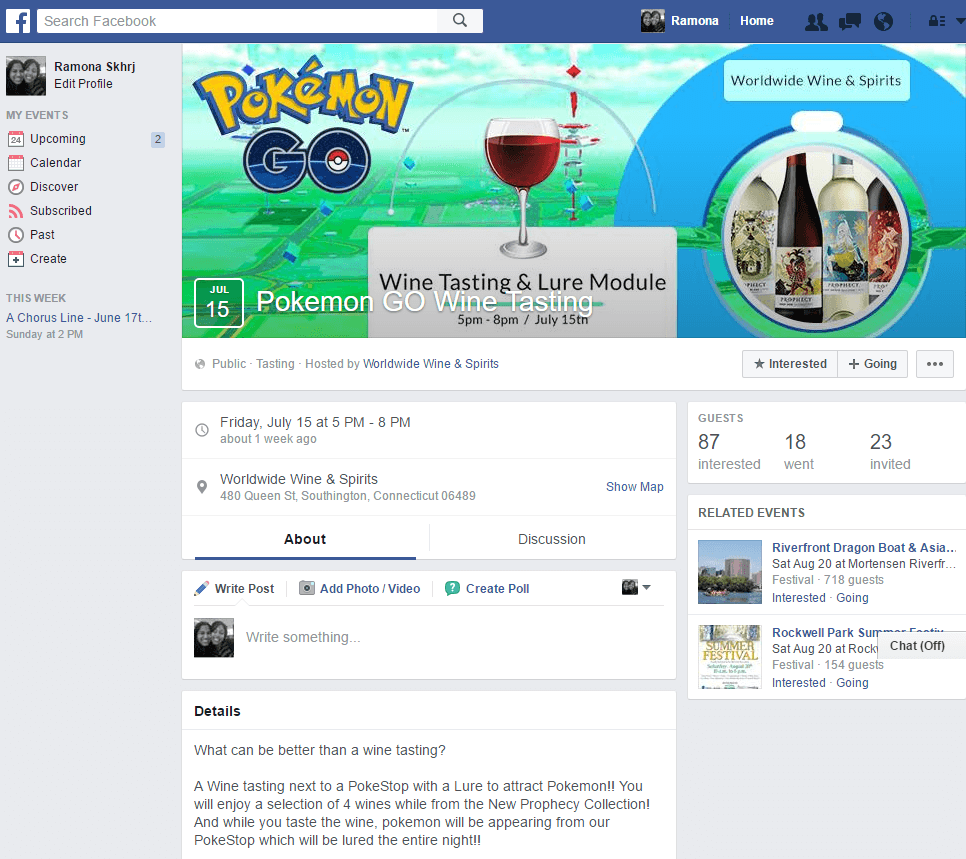 With Pokémon Go re-igniting interest in the anime franchise overall, Walmart wasted no time in putting up this sponsored update for "catching" plush toys in its toy department.

20 Tips for Optimizing Your Business Blog Articles for Conversions How To Make Each Lead Capture Form a Conversion Powerhouse How To Grow Your Email List: 13 Savvy Tips To Try in 2022 44 Landing Page Examples to Inspire Yours in 2022 The Selling 7: 5 Best Landing Page Video Examples