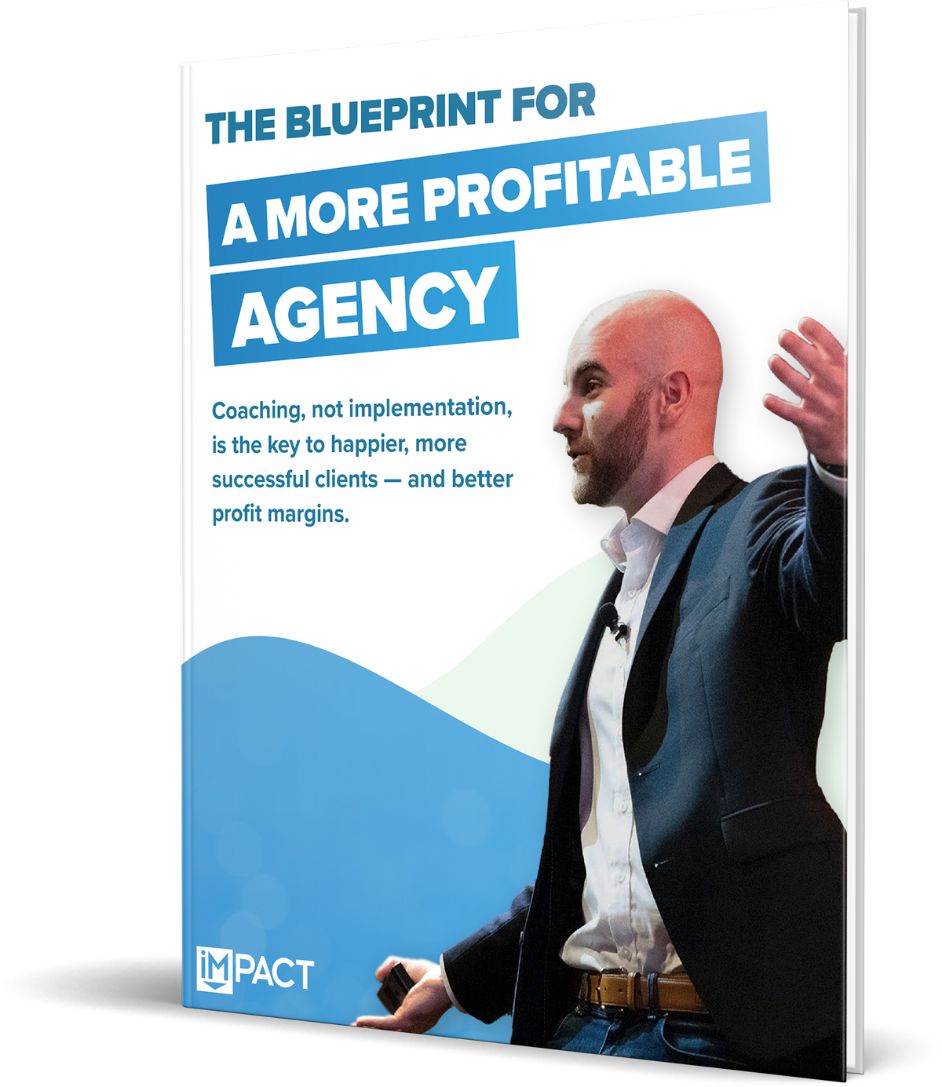 Jason Swenk also recommends this guide: The Blueprint for a More Profitable Agency.

Are your agency profits being hurt by sudden and unplanned changes in project scope? Are you tired of clients constantly changing direction or pivoting mid-project?

Many just chalk up to the nature of their business, but you don’t have to take it sitting down. In fact, you don’t need to take it at all.

Many agencies put all tons of their time and resources into generating leads and closing new business, but what they struggle with is delivering and maintaining a healthy profit margin -- and that's because they're unable to hold their clients to a scope of work.

We call this “scope creep.”

Free Guide: The Blueprint for a More Profitable Agency

What Is Scope Creep?

So, what exactly is "scope creep?"

Well... scope creep is the continuous or uncontrolled growth or change in a project's scale, at any point after it begins.

This can occur when the scope of a project is not properly defined, documented, or controlled.

What I want for you is to recognize scope creep before it begins and have a process to avoid it and/or manage it so it doesn’t cost you precious time and money.

I don't want you to make this same mistake that I made in my agency and so many other agency owners make all the time.

The scope of work should be clearly detailed in the proposal.

I know you think you’re already doing this, but what you understand to be the scope of the project and what the clients understand might be two very different things.

A lot of agencies look at their proposal as a way to win the deal so they gloss over some of the finer points thinking those will work themselves out, but really, you should already have a verbal commitment before you present a proposal.

The proposal itself is where you clearly state expectations, timeline, and deliverables down to all the fine points and details. That way, if there is any question or discrepancy between client expectation and agency delivery, you can reference their sign-off on the proposal.

#2. Manage All Changes With Approvals and Sign-Offs.

It may seem excessive but, have your clients sign-off on design and copy at every stage in the project.

That way if they want to change it down the road, you have documentation of their initial approval and can explain why you must charge them for a change.

And, yes,  you have the right to charge them for every change - even the tiny ones.

#3. Communicate Requests That Are out of Scope.

Make sure the client is aware their request is out of scope; even when the request is a small one.

I know some changes aren’t worth charging for and that’s fine. It’s nice to do a favor or two as a gesture of goodwill, but when you do, have the client sign-off on a zero-dollar change order.

That’s when you create a change order form with the actual cost, then cross out the amount, and have the client sign it.

This serves two purposes: first, it’s a formal acknowledgment by the client that you’ve done “something for nothing” and second, it shows them the value of your work on that small change.

A zero-dollar change order will come in handy for documentation later, too.

When there’s a bigger out of scope request, you have trained the client on your sign-off process and they won't be surprised that there's a charge.

So, Why Is Scope Creep a Problem?

Scope creep is a problem because it is directly linked to your agency’s profitability.

It doesn’t matter how much gross revenue you're generating if projects aren’t profitable.

When you aren’t proactive about scope creep your team ends up spending more time and resources to a project than initially planned and budgeted.

This kind of over-delivery is one of the two most common reasons agencies aren’t as profitable as they should be.

The reality is, scope creep is going to happen from time to time, but if you have a process in place and take preventative measures, you can minimize its effect.

Simply put, you and your team must communicate with the client and be proactive about reigning in the scope of work in advance.

How To Give Feedback to Clients: The Right Message at the Right Time How To Respond to Client Feedback 5 Cornerstones of Successful Inbound Marketing for Marketing Agencies How To Identify Client Pain Points How to Embrace 'Imposter Syndrome' and Help Clients Create Better Content

The Blueprint for a More Profitable Agency

Coaches, Consultants & Strategists
Published on May 8, 2019

How To Give Feedback to Clients: The Right Message at the Right Time

How To Respond to Client Feedback

How To Identify Client Pain Points

Best Books on Growing a Business (for Marketers and Consultants)

What Services Should I Offer Clients as a They Ask, You Answer Certified Coach?

Business Made Simple vs They Ask You Answer: Which Coaching Certification Is Right for Me?

How To Reduce Employee Turnover at Your Marketing Agency

How To Differentiate Your Marketing Agency

How To Create a Marketing Agency Structure That Drives Success

9 Ways to Avoid Client Churn at Your Agency

How Will the They Ask, You Answer Certified Coaching Program Improve My Agency?

How To Generate Leads for Your Digital Marketing Agency

How to Work With Challenging Clients (for Marketing Agencies)

5 Reasons Inbound Marketing Agencies Fail (and How To Avoid Them)

If I Become a Certified They Ask, You Answer Coach, Will IMPACT Help Me Train My Staff?

How To Improve Your Marketing Agency’s Relationship With Clients

How Can IMPACT Help Me Sell Coaching Services?

How To Improve Profit Margins At Your Inbound Marketing Agency

How Do I Know I’m Ready to Become a Certified They Ask, You Answer Coach?