Those who know me know I like to say I am a student of leadership, rather than painting myself as a “leadership expert.”

This mindset of continuous learning and practice allows me to walk into the IMPACT office every day knowing I can learn something new, get just a little bit better, and ultimately, drive our organization forward.

If you want to succeed in business (or in life), you must embrace this idea that there is always more to learn, but before I explain why, I want to share a story…

The Beginning of a Long Day

At the time, I was Dog 6, Commander of D Company, 1st Battalion, 504th Parachute Infantry Regiment. We started the day early with the entire company (about 80 paratroopers), taking an Army Physical Fitness Test (APFT).

After the APFT, the company went through its normal morning routine.

Shower, change, eat chow, head back to get after it.

This, however, was going to be a long day.

We had a company jump planned with a time on target around midnight -- the precise moment when I would turn 30 years old.

This meant we were at green ramp (part of Pope Army Airfield where all pre-jump training, staging, and loading of the aircraft takes place) many hours beforehand to go through the airborne timeline.

But Before You Jump, You Rehearse, (and Rehearse)

Before every airborne operation, each paratrooper would go through the same set of rehearsals.

We’d start with the pre-jump. This is where new jumpmasters would nervously lead the entire group through all of the actions that begin with the exit of the aircraft. 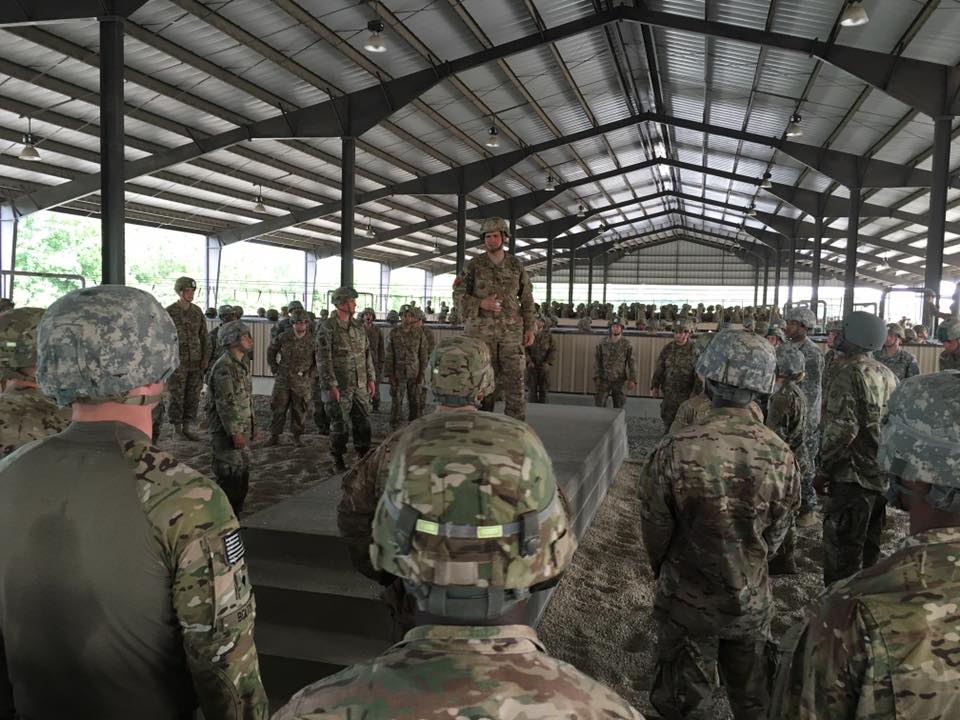 “The first thing we’ll discuss are the five points of performance. The first point of performance is proper exit, check body position, and count. Jumpers hit it…”

The jumpmaster would then go through every action, all the way down to how to pack up your chute once on the ground. Paratroopers would mimic and go through the steps the being dictated to them.

Next, we would move into a mock aircraft and practice actions in the air. We’d take a static line and had to maintain rip cord grip awareness -- so your reserve wouldn’t accidentally open while in the aircraft -- even though at this point we didn’t have our chutes yet.

The jumpmaster team, led by the primary jumpmaster, would then start all of their actions.

Some are time warnings, while others initiate action the paratroopers must take:

Then the door opens. (Again, this is a mock aircraft.)

The jumpmaster hands his static line to the safety and checks the door. They then clear the rear of the aircraft -- basically, hanging  out of the door to see if there are any obstructions a jumper may encounter when exiting.

Now, the jumpmaster looks back in the aircraft, checks the troopers, checks in with the safety, and continues to scan for landmarks.

They announce the one-minute mark, then the 30-second mark.

They clear the rear again, then come back into the aircraft.

The jumpmaster team exits the troopers. 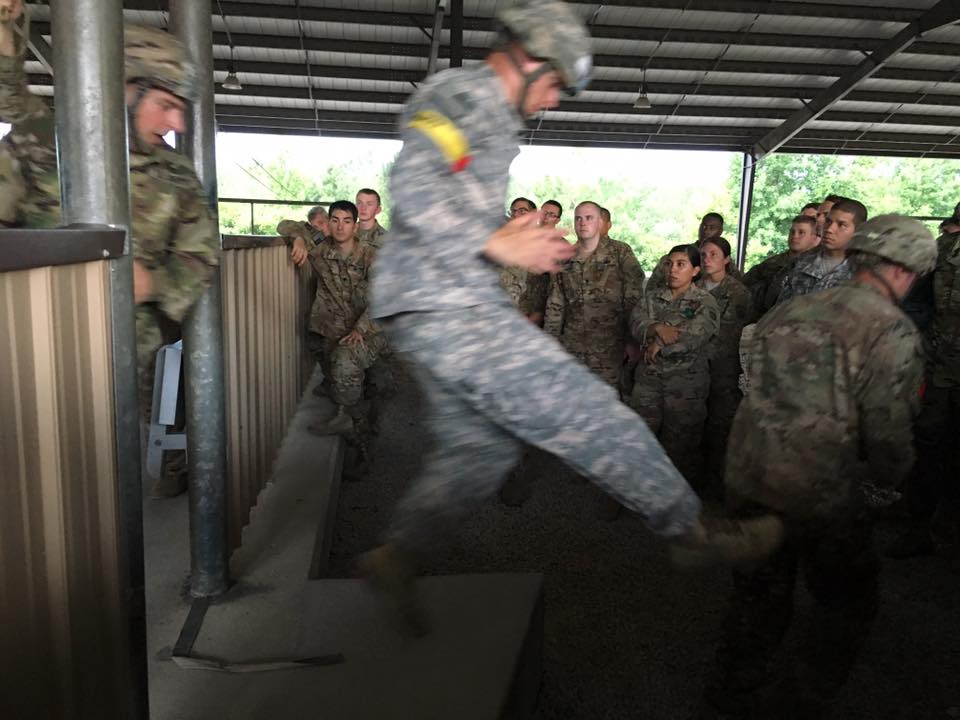 And then we line back up and do it again.

The answer is we want the actions in the aircraft and in the air to be habit. We want them to be rehearsed so much they become second nature.

(Note: What I’ve explained doesn’t even touch upon the preparation the jumpmaster team does prior to the jump. Everything above is performed multiple times before the troopers are even there. The jumpmaster team needs to ensure they are prepared for the responsibility they have to the troopers.)

This was my old life. Practice. Rehearse. Study.

We were always looking to get better so we could live up to the responsibilities we were given.

H-Hour, We Were Ready

After all of our pre-jump rehearsals, we finally donned our parachutes and gear, went through jumpmaster personnel inspections, and loaded the aircraft on that cold morning in December.

As the commander, I was the first jumper.

I moved into the door and waited for the green light and my favorite command:

I exited the aircraft and descended onto Sicily Drop zone -- in the very moment I was celebrating 30 years on earth.

We assembled on the drop zone and then we started our 10 mile road march back to the company.

Because of all the rehearsals we had done, the operation was a success.

How Do You Rehearse as a Business Leader?

Rather than practicing actions in the aircraft, today, as IMPACT’s COO, I am continually learning how to be a better leader and manager.

I’m also working with my team of direct reports -- who all lead their own teams -- to ensure they are continually trying to get better everyday, as well. That way, we can lead our organization... together.

In the Army, however, it was easy to practice and rehearse. In the business world it is a lot harder.

We aren’t preparing for an airborne operation, we’re trying to reach revenue targets. We’re trying to deliver the best value to our clients.

While you can practice or rehearse most of the tactical level task -- sales calls, client calls, how to deliver a presentation, etc. -- it is not as easy to practice leading your team or thinking strategically.

This is why you’re in a leadership role. Not to execute the daily tasks, but to develop and execute strategic and operations-level plans; to make the business work.

The 5 Ways We “Rehearse” at IMPACT

Here are five things I do with the team at IMPACT to ensure we are always learning and practicing. Every team and organization is different, so these suggestions may not be the best for you, but use them as inspiration for your own “rehearsals.”

I know this isn’t the first time someone has told you to read as a leader, but the reason it bears repeating is because it really is that important.

I spend a ton of time throughout my day reading or listening to audiobooks.

Personally, I read two books at a time. Sometimes both are business- or leadership-focused. Other times, I throw in some fiction to get my imagination going again. I’m a big fan of Dan Brown’s books and I am proud to say I am reading the Harry Potter series to my daughter.

I also read several blogs each day focused on leadership, marketing, and sales -- and of course, the IMPACT Blog.

I’ve found by talking about the stuff I’m reading with my team, they have realized they need get on the reading bus, too.

There is nothing better than having a member of the team show me some notes from a book they just started, especially when the notes are incredibly similar to my own.

We also have a company-wide book club, led by our Director of Client Services, Brie Rangel.

This serves as an opportunity for everyone to get together and discuss what they’ve taken away from what we’re all reading.

2. Give Candid Feedback & Accept it in Return

There is no use trying to sugarcoat anything -- be kind but direct.

But remember, feedback is a two way street. As leaders we are generally great at giving this direct feedback, but at times we aren’t very good at receiving it.

Learn to embrace feedback, good and bad. Never take it personally. Know it is coming from folks who want to make you and the team better.

To get better as leaders, we need to listen to other people. Part of this process is asking tough questions. So, dig deeper, ask why. And then, listen.

4. Talk About What You’ve Learned

Force your team to share what they’ve learned that week, month, etc., at every meeting. Also, have the team highlight their victories and failures, but focus on the lessons learned from them.  Then, share this throughout your organization.

You should never let these ideas die in meeting minutes that sit on one person’s computer or notebook.

Transform your organization into a continuous learning environment. Live the mantra:

“Getting better is what we want.”

If you’re not learning, you’re stagnating.

Your Commitment to Practice is Required

These five activities are dramatically different than running through pre-jump and rehearsal to exit an aircraft -- but they are equally important.

As a jumpmaster, I had everyone’s life in my hands.

I had to ensure troopers knew what to do to successfully conduct the airborne operation, which is why we rehearsed and practiced so much.

Today, I may not have people’s actual lives in my hands, but as a business leader, along with my team, we have people’s future in our hands.

If we don’t reinforce continuous learning and improve ourselves daily, we run the risk of stalling and failing.

We also risk the future of our teams and our organizations.