We had our team meeting until 10:00 am CST and then I finished uploading my video podcast, The IMPACT Show, to Facebook.

You’re probably sensing a trend here -- all of these things included Facebook.

That’s why, when I realized Facebook was down, again, my day came to a screeching halt.

At first, I didn’t panic. I refreshed a few times, checked my connection, the usual stuff. Eventually, I consulted our team Slack channel and, sure enough, I wasn’t the only one experiencing this outage. 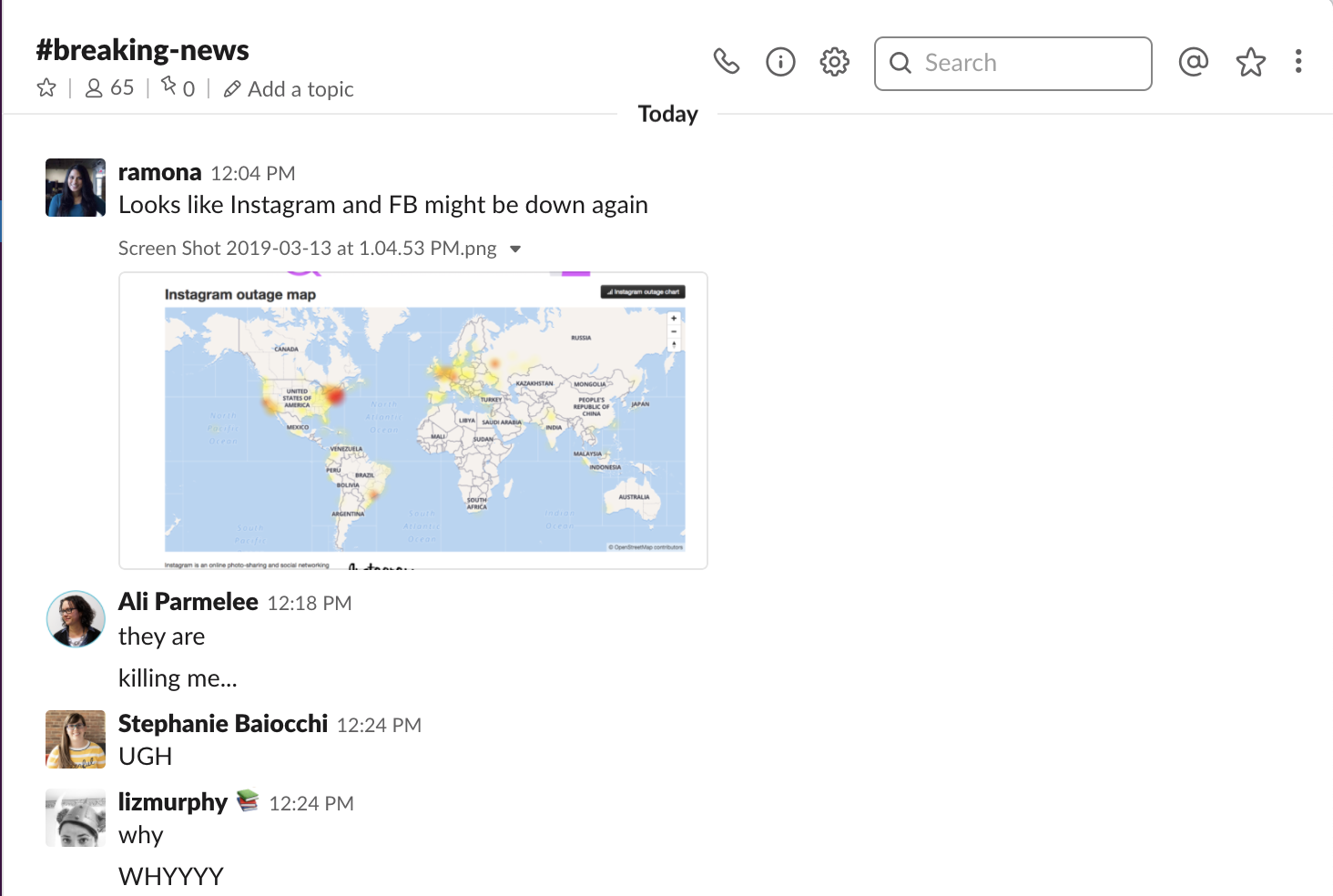 I checked downdetector.com and saw the red spots popping up around the world and the reports pouring in by the second. 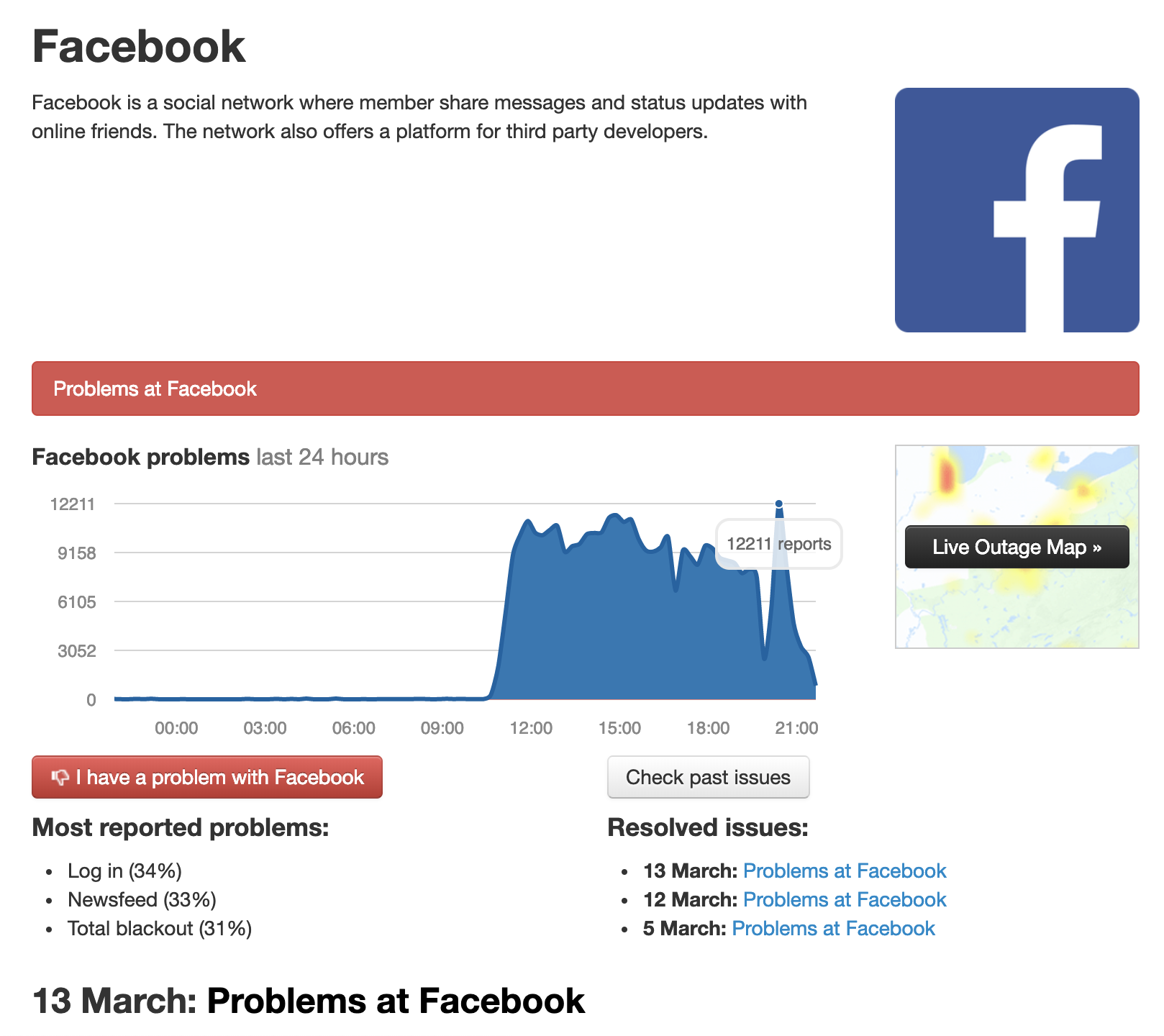 Yup, it was happening again.

Since Facebook has had multiple outages in the past few months, I wasn’t exactly surprised and figured it wouldn’t last long. (Spoiler: I was wrong.)

The Timeline and Impact of Facebook’s Massive Global Outage

At 12:49 pm CST Facebook tweeted that they were aware of the situation and were working to resolve the situation.

We’re aware that some people are currently having trouble accessing the Facebook family of apps. We’re working to resolve the issue as soon as possible.

Considering their lack of updates during their last few outages, I was at least pleased to see something from them even if it was on Twitter and not an official status page (that came later).

At 2:03 pm CST they followed up with more information...sort of. They confirmed it was not caused by a distributed denial-of-service (DDoS) attack which is “a malicious attempt to disrupt normal traffic of a targeted server, service or network by overwhelming the target or its surrounding infrastructure with a flood of Internet traffic.”

We're focused on working to resolve the issue as soon as possible, but can confirm that the issue is not related to a DDoS attack.

However, the vague responses and lack of other updates have left many users skeptical.

“Facebook [has] flat out denied that their outage could be caused by a distributed denial of service attack but I’m yet to be convinced – especially given their very vague explanations,” said Edward Whittingham -- a former police officer and qualified solicitor, who is now the MD of The Defence Works, in an article by Forbes.

Whatever the cause, hours went by and we still had no answers -- and no service.

me attempting to do my very facebook-centric job when facebook is down... #facebookdown pic.twitter.com/YsHn5FXu3R

Clearly, I was not the only one who felt the pain.

While users of the Facebook family of apps were growing more frustrated as time went on, businesses who rely on Facebook for advertising and to do business had even more cause for concern. Even I couldn’t do most of the work I intended to do, nor could I communicate with our community in IMPACT Elite.

my clients are like... uhh what do you mean they are just taking my money and burning it?

Just before midnight central time on Wednesday, Instagram posted that the platform was back up and running.

As I write this, it is now more than 24 hours since the outage and the Facebook family of apps are still having issues. Plus, I still haven’t made a dent in my to-do list.

During previous Facebook outages, it was still fun and funny to watch GIF-filled, panicked reactions flow into the #Facebookdown feed on Twitter. But not anymore.

It turns out, this is the most severe outage in Facebook’s history.

“The last time Facebook had a disruption of this magnitude was in 2008, when the site had 150m users - compared to around 2.3bn monthly users today.” -- Dave Lee, North America technology reporter for BBC.com

This outage also affected Facebook’s internal business communication service, Facebook Workplace. This meant that large companies who use Facebook to communicate during the workday were unable to use the platform and had to turn to a different channel.

With an outage of this magnitude, people start to wonder if their personal data is safe. In fact, a criminal investigation is underway, looking into data deals between Facebook and some of the world’s largest tech companies. Ever since the Cambridge Analytica scandal, many are considering deleting their Facebook accounts completely.

What We Can Learn from Facebook’s Outage

Significant outages like this one are problematic for marketers who rely on Facebook’s platforms to do business. Whether you’re advertising on Facebook and Instagram, hosting a live stream on your company page, or engaging with your online community, massive service interruptions cause a lot of issues.

I spoke with Ali Parmelee, IMPACT’s Facebook strategist, who said jokingly, “Thanks for the forced break to meditate, Facebook.”

But things weren’t funny for long. Ali went on to say “Full disclosure—it was not the ideal time for this to happen for many of our clients with big events, news, and promos going on. One client was on HBO Vice News, CBS Evening News, CNN, and more yesterday and I was getting frantic texts from them while they were on set waiting to film. They wanted to be posting to their social accounts but there was just nothing we could do.”

I asked her how she deals with these outages when so many clients are depending on Facebook. She said, “Unfortunately, this is going to happen in a digital world. Sometimes you just have to roll with it -- the show must go on! For us, we took it as a perfect opportunity to take the 'quiet time' to keep planning out Q2 to clients and build out strategies for new clients.”

So what’s a social media marketer to do? During the last major outage, Ali reminded us to make sure you have clear lines of communication to keep clients or key stakeholders in the loop when an issue occurs.

She also shared the importance of having a multi-channel approach so that if an issue does arise, you have other channels in place.

Same! We always go Facebook Live on Wednesday nights and now I’m worried we won’t be able to! 😬😬😬

Now that I can actually see our company feed again, I see the social posts we had scheduled in HubSpot, our marketing automation system, did not publish to our page. I went into HubSpot and sure enough, our scheduled posts were in the “unsuccessful” folder. This means I’ll have to recreate these posts tomorrow. 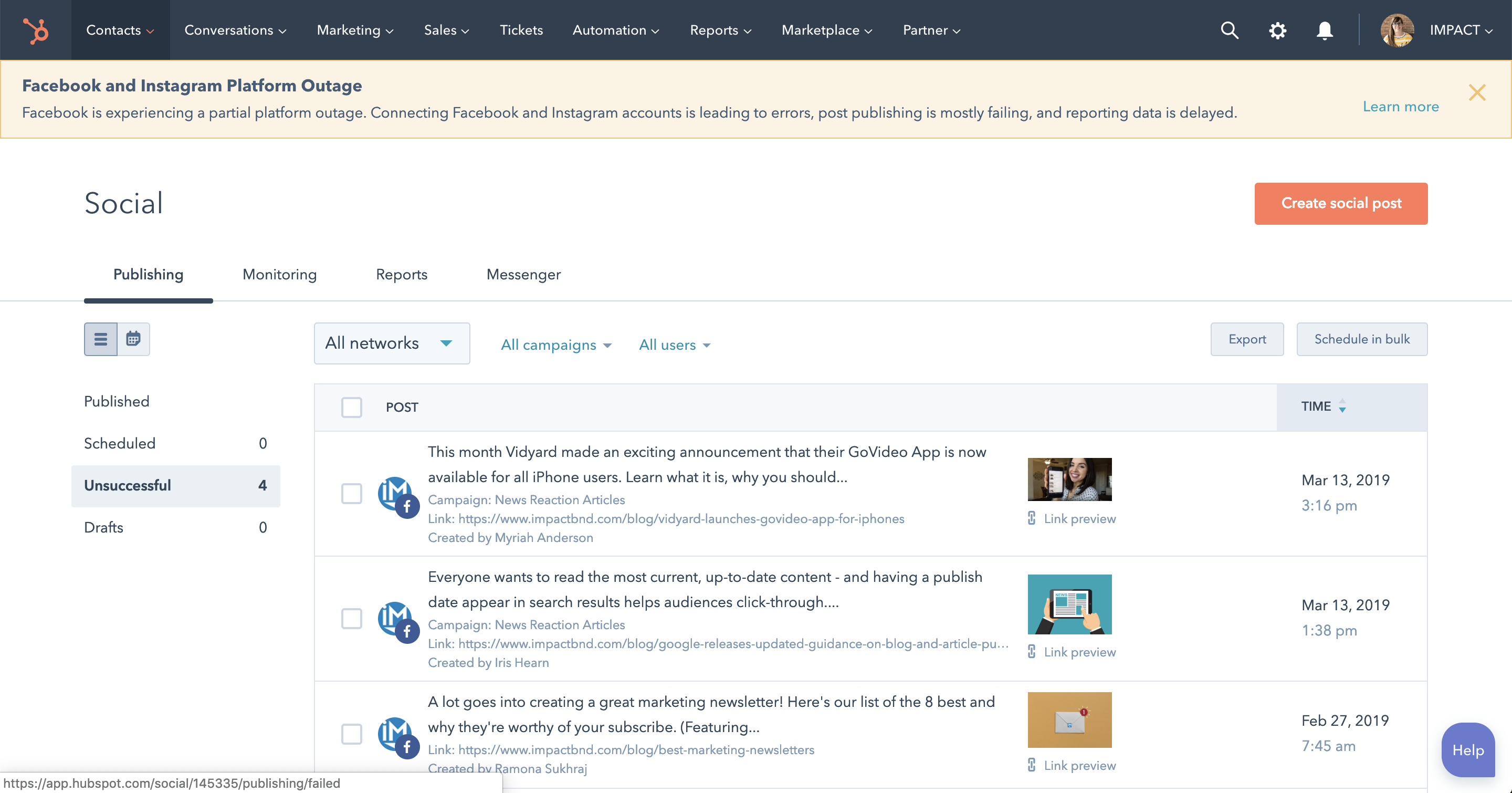 For many social media managers who have hundreds of posts scheduled across multiple accounts, there will be a lot of catch up to do once everything is back up and running.

“I ended up having to work from 10:00 pm to 2:00 am to make up for all the planning and posting to get the social out,” said IMPACT’s Ali Parmelee.

And she wasn't alone.

Right there with you. I'm doing everything else on my task list atm to fill time...but that means a possibly late night tonight catching up on the FB stuff.

Finally, the big one -- our community. IMPACT Elite, our community of over 4,500 inbound professionals, lives on Facebook.

There are definitely risks to consider when you build something so vital to your business in a rented space. I’m currently working on a guide to creating online communities that will include a complete breakdown of the options for community building and what to consider.

The tl;dr of it is that for many organizations, IMPACT included, the benefits of being able to build a community on a free platform outweighs the risks. Building a custom-owned community would require a decent investment of resources and time.

When we started IMPACT Elite, we weren’t sure if a community would bring us and the members any value. We’ve since learned that it does but we had to start somewhere, right?

We also knew that the barrier to getting people into our community was pretty low on Facebook since most of our audience already spent a fair amount of time on the social network.

Some things we’ve done to bridge the gap between rented and owned space include encouraging our members to subscribe to our email newsletter, THE LATEST, and launching our advocate community, IMPACT Insiders.

The other lesson to be learned from Facebook’s outage is one in social customer care.

When something like this happens, people take to social media. It’s not not just to complain though. We’re also looking for answers.

Facebook does tend to update its users via Twitter when an outage occurs. Take this example from November of 2018: 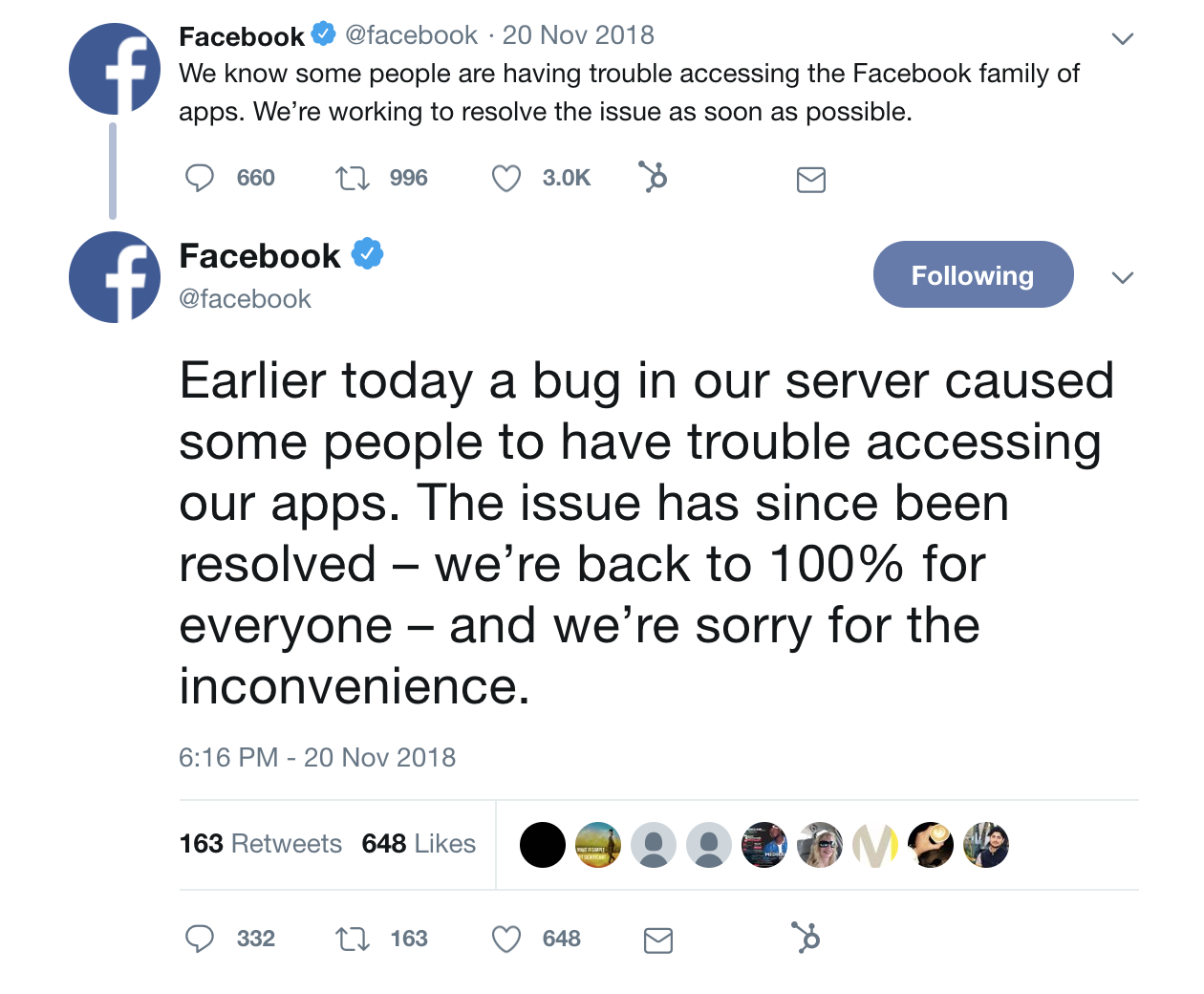 Social platforms have become an amazing tool for customer service, allowing organizations to troubleshoot app issues, rebook canceled flights, and more without requiring users to wait on hold on the phone (ugh, the worst).

Social media is also an efficient communication tool for organizations to keep their followers updated when issues arise. The challenge is keeping your followers updated and responding to mounting concerns. During this outage, users began to speculate that the issues could be caused by hackers or a malicious attack of some sort and Facebook did update followers when they confirmed it was not a DDoS attack.

I've been hoping for a full update from Facebook like this one from their outage in 2010, but after more than 24 hours we got this wonderfully vague tweet:

Yesterday, as a result of a server configuration change, many people had trouble accessing our apps and services. We've now resolved the issues and our systems are recovering. We’re very sorry for the inconvenience and appreciate everyone’s patience.

Is dealing with Facebook frustrating and risky? Sure. Is it worth it? You tell me.

In fact, now that Facebook is back up, you can tell me in IMPACT Elite!