You may or may not have noticed, but yesterday afternoon around 2:46 p.m. ET, Twitter experienced a widespread outage across the globe.

Users trying to pull up their timelines on desktop, iPhones, iPads, and Androids alike were all met with a message that read simply, “Something is technically wrong.”

For many of you marketers and social media fans reading this, you may be thinking “who cares?”

Twitter, in recent years, has seen a dramatic decrease in daily active users and a mass exodus by marketers finding it difficult to drive traffic and leads from the platform.

With the volume of tweets published every second, your message, no matter how valuable, clever, or profound, is just a drop in the ocean of information that is Twitter.

But, as I’ve been preaching to my friends and peers for years now, professionally or personally, that’s not what you should be using Twitter for anyway.

In the past when Amazon, Facebook, and most recently, Google Calendar went down, the first place people turned to react and see how others were reacting was — you guessed it — Twitter.

In fact, we owe several articles on our site to this phenomenon as our Director of Web & Interactive Content, Liz Murphy, reiterated today: 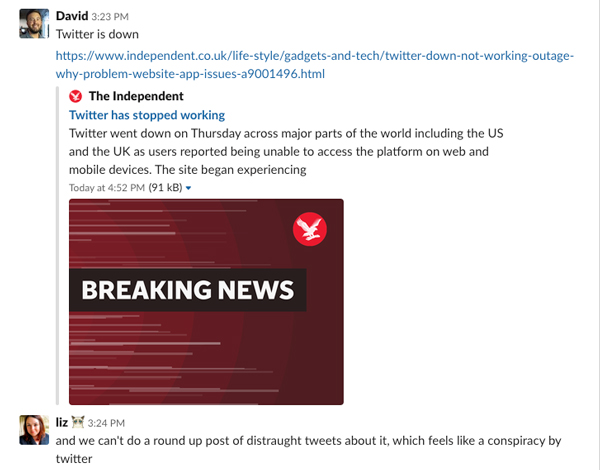 But the same can be said about most major public events and gatherings.

Each moment is slapped with a hashtag and millions from all walks of life begin watching. Tweets are being posted, retweeted, and cited as direct quotes and resources for news networks.

It is at the epicenter of the action.

So when the platform itself experiences an outage, where does one turn to know and share what’s happening in that exact moment?

But as a visual-focused network, this feels unnatural.

You can try a good old-fashioned Facebook status, but with its slower nature and algorithm, your time-sensitive reflection is likely going to get lost.

Real-time interaction, my friends, is a niche no other platform has mastered quite like Twitter and this incident showcased that prominently.

So, why am I writing all this? Because frankly, Twitter has gotten an undeserved raw deal, especially by marketers.

What makes the platform difficult for marketers to generate traffic and leads from — it’s stock-ticker style timeline and real-time engagement — is also what makes it valuable for their brands.

Twitter is not about pushing people back to your website or capturing their information. It’s about being a part of the conversation, staying relevant, and establishing yourself as a thought leader.

Brands and marketers should capitalize on Twitter when attending or hosting live events to be a part of the moment.

You should be monitoring relevant industry news breaks and be ready to react.

While Twitter struggles to monetize its place in society and our public commentary is undeniable. And with that, I leave you with a tweet from Liz that I think summarizes my point: