What Does the Latest Google EU Fine Mean for Marketers?

On Wednesday, March 20, the European Commission imposed a $1.7 billion fine on Google for violating EU antitrust rules by placing their search advertisements on third-party websites.

This is the third fine in three years for the Alphabet-owned company for what EU Commissioner Margethe Vestager, said were anti-competitive practices related to its AdSense advertising service.

Google has taken action in response to the fines, but European and US advertisers should take notice when it comes to executing on future ads.

The issue was related to how Google abused its dominance to stop websites from using brokers other than the AdSense platform.

In simple terms, publishers were prevented from placing any search ads from competitor brokers on their search results pages, forcing them to reserve the most profitable spaces on the pages for Google’s ads.

Google even went so far as requiring publishers to seek written approval from them before making changes to how competitor ads were displayed.

Vestager shared at a press conference:

“....Website owners would have to get the written approval from Google before changing the way they displayed search ads of Google’s rivals — right down to the size, the color and even the font of those ads.”

This gave advertisers and website owners less choice when it came to creating ads and they likely faced higher prices that they then had to pass on to consumers.

For businesses running ads through Google directly, this meant that their ads always had more favorable placement than those served by a competitive platform. 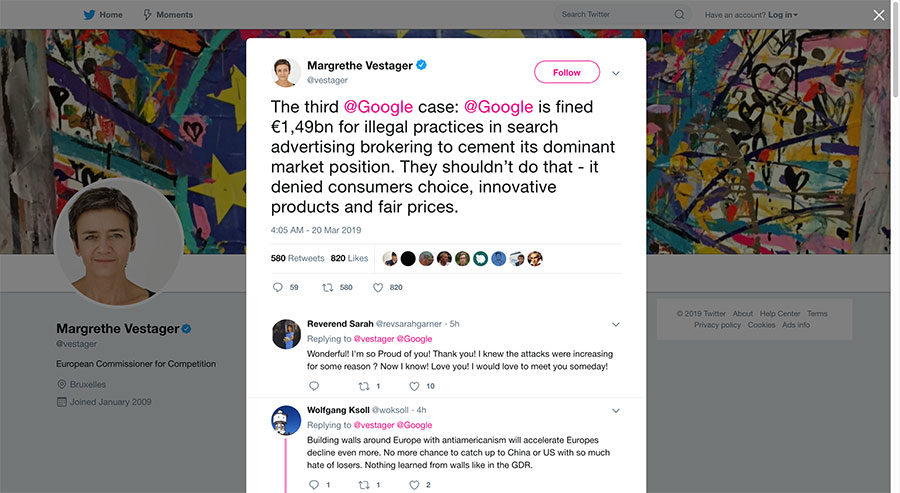 The three fines imposed on the tech giant by the EU represent the biggest antitrust fines they have ever imposed, totalling 8.2 billion euros ($9.3 billion U.S. dollars).

According to an email statement by Google’s Senior Vice President for Global Affairs, Kent Walker, Google has “already made a wide range of changes to our products to address the commission’s concerns.”

One of the changes that Google has already implemented is stopping the use of exclusive contract clauses. Walker has stated that, “Over the next few months, we’ll be making further updates to give more visibility to rivals in Europe.”

However, even with the fines and changes, Google continues to dominate in the search and advertising arena.

Google currently controls 37% of all digital ad sales in the U. S. That is almost double Facebook, the next biggest company.

Even accounting for all ad revenue (tv, print, billboards, etc.), Google’s share is still 14%. While that may sound like a small share, it is still more than the entire print ad revenue percentage.

As the dominant player in advertising, Google faces more scrutiny for its practices.

What Does This Mean For Marketers?

So far, Google has absorbed the imposed fines and made some changes; however, it does not look like their dominance in digital ads is in any danger. For marketers, this is definitely something to keep an eye on.

If you are using ad brokers other than Google Ads, this is something to look into as it may be affecting your ad placement and performance.

Today, many product searches continue to yield only paid advertisements on the top of the first screen, and anytime anyone clicks on one of those ads, Google gets paid.

I am definitely going to be keeping an eye on the continuing investigations to see how it will affect online advertising. In the meantime, the “pay to play” game continues to be an important part of the marketing equation.