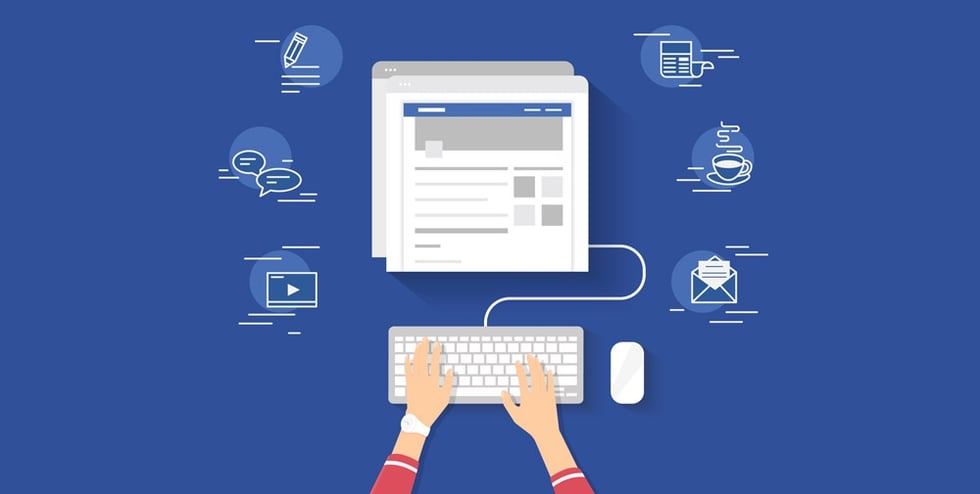 I wrote a blog a few months back about digital intimacy and how personal our digital space has become. Nowhere is that more relevant and noticeable than on Facebook.

Nine articles. That’s how many I read about this new News Feed.

Each said something conflicting and none seem to be aligned on what was actually happening. What was unanimous is that Facebook was bringing us a new News Feed, an “explore” tab, whether we wanted it or not.

It was also mutually agreed upon that this was bad news bears for marketers and businesses who leverage Facebook for relationships, traffic, and awareness.

But listen -- It’s all just smoke.

My first thought when I learned more about this News Feed, called Explore, was, “Wait - this is what Instagram already does.”

If you’re a hardcore Instagram user like me, ‘Hello, 2 AM browsing,’ then chances are you’ve probably already experienced Explore. It’s the search icon at the bottom of your menu.

In it, you find content from people that you don’t currently follow. Some brands, some personal, some comedians, or for me, some cakes, makeup tutorials, handwriting videos, and lots and lots of Shahrukh Khan. (If you don’t know who he is, you should. Our Content Marketing Manager, Ramona will concur.)

The articles I read were correct that Facebook does have a separate News Feed devoted to suggested content a user can find and engage with outside of their current reach.

I, personally, love this feature on Instagram. I spend a lot of my time on Instagram in that feed. Exploring. Ha. Get it?

But, what does this new News Feed mean on Facebook?!?!

As I tend to do, I decided to go directly to the source to figure it out. Facebook saved me a dozen unanswered emails and Help Requests by publishing an article making an official statement about Explore.

“The goal of this test is to understand if people prefer to have separate places for personal and public content. We will hear what people say about the experience to understand if it’s an idea worth pursuing any further. There is no current plan to roll this out beyond these test countries or to charge pages on Facebook to pay for all their distribution in News Feed or Explore. Unfortunately, some have mistakenly made that interpretation — but that was not our intention.”

What this means is that this Explore tab has existed for some time, and in some very specific markets (Sri Lanka, Bolivia, Slovakia, Serbia, Guatemala, and Cambodia) they are testing separating personal and commercial content, but there are no plans to bring this global.

In other words, nothing has really changed.

A few more things to know:

Now, Let’s Discuss What You Should Be Paying Attention To

If you’re not located or marketing in one of the test countries, there are bigger things for us to be thinking and planning for.

The Facebook Marketing Bubble popped for many of us in 2015. Many many small businesses, some who I worked with, really felt the pain of not having the reach to their audiences organically anymore.

There were a lot of bitter feelings toward Facebook because of this. It felt like greed, a business , a stab in the back of the companies who helped bring Facebook to the place of being a daily app -- but, we know that’s not the truth. Right. Right?

They know in order to keep their users engaged, enthralled, and logging in 6-10 times a day, their experience has to support that.

Facebook took a firm stance against promotional content that existed solely to benefit the company, along with most recently, fake news and political propaganda. Users said, “no more spam” and Facebook agreed.

As inbound marketers, we should applaud this, though it’s made it a little more difficult for us.

This is not a bad thing because if you’re willing to spend money on an ad, you’re going to make sure it’s the best damn thing you could create - at least you should.

All of this backstory is to tell you that: Yes, you do have to pay-to-play in any real way on Facebook. It’s not a bad thing and right now, if you’re willing to invest, it’s the least expensive way to get in front of your audience.

Earlier this year, I read an article and watched a few videos from Gary Vee talking about Facebook ads. I immediately connected with what he was saying, but I too was seeing the same thing happen across all of my clients’ industries. Facebook ads are cheap.

Not only are they inexpensive, they can, when done correctly, can be incredibly powerful.

For example, we launched three Facebook ads for a client, that after a single week of running, had blown our benchmark impressions and clicks out of the water. Conversions were slow, but that was an indicator of more testing that needed to be done.

For those same ads, we were spending less than 4-cents-per-click. 4 CENTS.

Here’s how we did it:

Don’t panic about the new Explore feed that already existed.

It doesn’t change anything for you or your audience. Instead, embrace the new age of Facebook for Businesses, set a solid strategy on how you’ll continue to engage with your audience and consider investing in Facebook ads before the market is saturated and it’s too expensive to be worth it anymore.