9 Big Brands that Will Actually Engage with you on Twitter 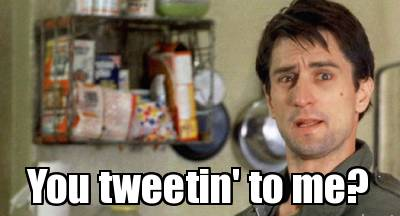 Social media is tricky business, if only due to its innate ability to deliver us mixed signals.


The initial attraction is in our ability to share, distribute, and broadcast the content of our choosing any time we feel like it. And people can actually see it!


But that's not really how "social"

works, is it? You can't scamper around a cocktail party dropping useless nuggets of little to no relevance to other guests unless you want to be standing by the shrimp platter alone.


No one wants to be the one standing at the shrimp platter alone.


The solution? You have to give a crap and value the art of a two way conversation. And no faking it. Being disingenuous is as noticeable as the dude on the treadmill next to you at the gym that forgot his deodorant.


I decided to perform a little experiment recently, employing the help of a couple of my coworkers in an attempt to uncover some big companies that actually do give a crap and engage with their followers on Twitter.


Moral of the story? If these big brands can do such a great job of engaging with their followers, what's your excuse for not doing the same?


Famous for their hearty IPAs – 60, 90, and 120 minute IPA – it seems like the folks over at Dogfish Head also spend a few minutes engaging with their social following as well. After all, it took them no time at all to respond to my inquiry regarding their annual artist collaboration. This years? The Grateful Dead! (I'm sure HubSpot CEO Brian Halligan is thrilled Dogfish Head distributes in Massachusetts.)

After being named to the Inc. 500 list in 2005, Dogfish Head has been the fastest growing brewery in America. Yet, they've still managed to stay engaged with their fans via Twitter.


Thanks for staying grounded, guys!


Now for our friends over at HubSpot, I decided to get a little crafty. I asked a brand new intern to inquire about future updates to the Academy sessions.


An intern. Who they've never heard from or engaged with. This was sure to be lost amongst the noise generated from their more than 300 thousand Twitter followers, right?

HubSpot went a step further, as Alan Perlman, member of the HubSpot Academy team, responded to the inquiry himself.


I have to admit, I was very skeptical the folks over on the social team at Coca-Cola would even see my tweet, let alone respond to it.


I was pleasantly surprised to see such a prompt, human response. This really illustrates how social media has revolutionized the way brands interact with their audience. Fifteen years ago this wasn't at all possible. Now we can realistically engage with the biggest brands in the world.


The folks over at Wistia have been making big moves lately, as not only does their video hosting rock, but they've recently integrated with HubSpot, ensuring the lead generation game is about to get a whole lot more visual and interactive.


They also have a great brand with an identifiable personality, helped greatly by their ability to interact with their followers and customers.

@bobbyjkane I might try moving that backlight a bit away from the wall. I think you'll get a nicer effect that way, but it's up to you! :)


This response took only 3 minutes and provided my co-worker with a valuable tip to make our video shoot look and run even better.


Providing marketers with a more intuitive, measurable way to publish content, Uberflip has become synonymous with premium content amongst those in the industry.

@Bonini84 Thank you! Come visit our hot pink booth to learn more with @yostar and @jzifkin of @Uberflip #CMWorld


Yet another prompt response. While it's certainly refreshing, it's also quite simple. When people engage with you, reciprocate. So simple, yet so rare among many big brands.


Gentle and replenishing on the skin, Dove also pays careful attention to nurturing and engaging with its following.

@Carolyn_Mariee We're glad you think so, Carolyn. Thanks for the love! :)


Yet another example of a household brand becoming much more personal simply by engaging via social. Important? You bet.


Just think, if Carolyn ever finds herself torn between Dove and Dial in the hygiene aisle in her local grocery, which do you think she'd be more likely to buy?


While considerably smaller on a mainstream scale, IdeaPaint is well known amongst offices and businesses looking to foster a more creative work environment. Just paint your wall, table, or whatever tickles your fancy, and you've now got yourself a new dry erase surface. (After it cures for 7 days, of course.)


And to answer their question, the painting went great!


They help people get jobs. (Seriously, they have t-shirts that say that.)


They're also in tune with their following when it comes to answering questions.

@YesItsNatalie @indeed Natalie, we don't support multiple recipients now, but if you get in touch, we can set up e-mail forwarding for you


This was another example of a specific member of the company reaching out personally, rather than by using the company handle. It creates a much more personal relationship with the brand when you're interacting with the people behind it.


While Magic Hat may not be known on a national scale with the likes of Coors and Miller, they've grown to be one of the finest craft brewing companies on the east coast. (And are far more interesting.)


While the answer may have bummed us out – Hex was great! – the fact that they responded in such a timely manner while also offering an alternative speaks volumes about their social strategy.


All the Cool Brands are Doing It


If there's anything to take from this, it's that successful brands share one common thread in regards to their social media strategies; they act like freakin' humans!


They engage like humans. They respond to inquiries. They address concerns. They ask questions. They say thank you. They have manners.


They respond in a social manner on a very social platform (duh!)


If these big brands are doing it, why can't you? Are you capable of being more human in your social strategy?