THINKing Bigger with IMPACT: THINK Creative & IMPACT Are Now One

Today is a big news day. THINK creative group has merged with IMPACT, but this isn’t a traditional merger announcement.

This is very personal to me -- both as a business owner and as an individual.

In order to understand why, however, first I need to share with you a handful of moments that have changed my life.

I’m not talking about a few good decisions I happened to make here or there that yielded positive results. I’m talking about life-altering moments that fundamentally shifted the course of my life.

Luckily, I am self-aware enough to have recognized them as they were happening and grabbed onto them with both hands.

After I started my first marketing company, I emailed a college professor who had a huge impact on me.

He was one of those professors you actually learned something from. We studied real-time businesses, dealing with modern scenarios; not the irrelevant tactics of now-defunct organizations.

Under his guidance, we wrote bold business plans and dreamed of the game-changing startups we would lead one day.

So, eventually, when I did create a successful solo-entrepreneurship, I reached out to him to say a heartfelt thank you via email.

Shortly after I hit send, he responded by inviting me to come have coffee.

After three hours (and a lot of caffeine), we ended our meeting with him telling me about another previous student he kept in touch which, who was in digital marketing.

He knew we had a lot in common and wanted to introduce us immediately. I left with a lunch scheduled the next day for us to meet.

Naturally, we became fast friends. Then, after a while, we started working on projects together and in 2004, we opened THINK creative group.

During that whirlwind, her husband introduced me to a new designer, Joel, at his friend’s agency whom he thought I would hit it off with. He was kind of right. In the not-too-distant future, I would marry Joel and have two amazing daughters with him.

If I hadn’t sent that one email to say thank you, my life would be extremely different.

Gary Vaynerchuk was the keynote at HubSpot’s INBOUND 2016, and I was lucky enough to be in the audience. Some say this was one of his best keynotes. I emphatically agree. 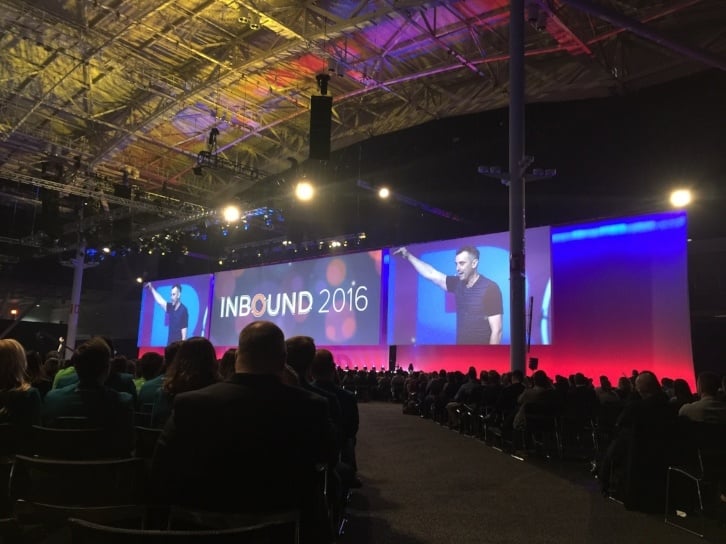 It wasn't long after he took the stage that I realized this wasn't a run-of-the-mill “Gary Vee” monologue, but rather I was listening to his manifesto.

During his talk, Gary passionately pleaded with the audience to “Do This and Succeed” which sounds pretty straightforward and typical “Gary Vee” fare on the surface -- but it wasn’t.

He preached about shaking up your risk-tolerance and putting your money on Facebook Ads. He pleaded with everyone not to entrust the youngest person in the office to master new technology and services, but to learn it themselves. I vowed that I would accept his challenge.

He was cracking open my head and pouring inspiration in.

I remember sitting in the audience, texting my business partner that we had to have a big talk about making a pivot.

I left that conference and started sopping up all the information I could about Facebook Ads. I had been doing Facebook ads for a while, but I was only scratching the surface.

I found my it. I found my thing that I’m awesome at and more importantly, I was passionate about.

Facebook Ads were the perfect blend of creativity and analytics. I could talk for days about them (those who know me know I’m not exaggerating) and all of the endless possibilities of how we can create amazing full-funnel campaigns.

My mind races and I feel like my mouth can’t keep up as I get nerdy and spout off acronyms and sketch out endless Facebook Ad blueprints...It makes me absolutely giddy.

Gary’s talk moved me. It lit a fire in me and informed me to make decisions that altered the path of my business. Sitting in on this one keynote made an indelible impact on me.

I’d heard about Bob Ruffolo and IMPACT for years. Not only was he making a name for himself in the inbound world, we were practically neighbors! (I’m in New Haven, Connecticut, and he was just a few towns over in Wallingford.)

So, while at the same conference -- where my mind had already been blown by Gary Vee -- I also sat in on Bob’s session talking about “What They Never Taught You About Growing an Agency.”

I was struck by how disarmingly honest Bob was.

I wasn’t used to that. Most agency owners I knew told grand stories of how rosy everything was, and here he was being so transparent. He was candid about mistakes -- big mistakes, organization mistakes, his mistakes -- and what he did to fix them.

I was really impressed.

Fast forward a year to a Partner event at HubSpot; THINK creative group was introduced to the IMPACT team and we made it onto Bob’s radar. He asked to come in and meet our team.

I was honored that he was interested in getting to know us because, after listening to him speak the year before, I had a lot of respect for how he ran his business and the team he’d built.

After sharing with him what we’re doing with Facebook Ads (I’ve already established how I can go on and on about this topic), he got excited.

This was something he wanted to do more of and we could be the key. Not too soon after, he posed the idea of merging.

Wait, what!? My initial reaction was a hard no.

“I will never sell my business,” I said this during a meeting with my co-owner and our business consultant during a planning session for 2017. I said this without hesitation.

Behind the Scenes (in My Brain & at THINK)

Here’s the deal -- when I do something, there is no grey area. I am all-in or not at all.

So, of course, I didn’t have an exit strategy when it came to THINK -- by way of merger or otherwise -- because I wasn’t planning on exiting.

Since 2004, I poured my heart and soul into building THINK creative group.

We started out as the fresh, young kids in New Haven who were hungry and said yes to every project. Over the years, we continued to grow our confidence and skills and honed our services all along the way.

In 2014, we had an epiphany when we found HubSpot.

It was like we found the mothership and we were home. We were already doing email marketing, social media management, blogging, and more -- basically all things inbound marketing. We just weren’t calling it that.

So, we embraced HubSpot and became an inbound marketing agency, and as I just mentioned earlier, we made another big pivot in 2016 to become a leader in Facebook Ads.

We ran THINK creative group like a family because as you’ll get to know about me, is the most important thing in the world.

I’ve had the privilege of growing up in a family that values spending time together, helping each other, and having a good time along the way.

My home family and work-family were intertwined (especially since my husband has been our lead designer for 13 years) and taking care of both my families has always been equally important to me.

My team is amazing and they’re great at what they do.

We created some fantastic results for our clients and helped build so many of their businesses. We wanted to do more, but we kept running smack-dab into typical small business conundrums.

Even with how explosive Facebook Ads were for our clients and for us, we couldn’t seem to get to the next level -- and I wanted that very badly for my team, my clients, my family, and myself.

So I thought. A lot.

What was I afraid of? Change? Failing? Losing control?

I thought about something that Tony Delmercado of Hawke Media said once that has been seared in my mind:

Forget Everything and Run

Face Everything and Rise

It’s your call which path you choose.”

Then I realized, this wasn’t just a merger. This was a major opportunity.

THINK could become part of the best inbound marketing agency in the country and I could have the chance to build an entire team of advanced paid media specialists with the full support and vision of IMPACT.

It would allow my team and clients to grow, and, most importantly, I could create a better work-life harmony for my family.

Time to Face Everything & Rise

Our entire team and clients all became part of the IMPACT family.

I know that this was not a small decision for Bob and Chris Duprey, the COO, but I thank them for seeing the amazing potential that was there for us to join forces and to do big things together.

They saw something in our team. We felt a kinship, we shared the same values, we have the same hunger to keep becoming better, and most importantly, we both treat our people like family.

I am so excited to help build an entire team of paid media strategists that can deliver that missing piece to help create strong and truly comprehensive digital strategies for current and future IMPACT clients.

I know amazing things are ahead. 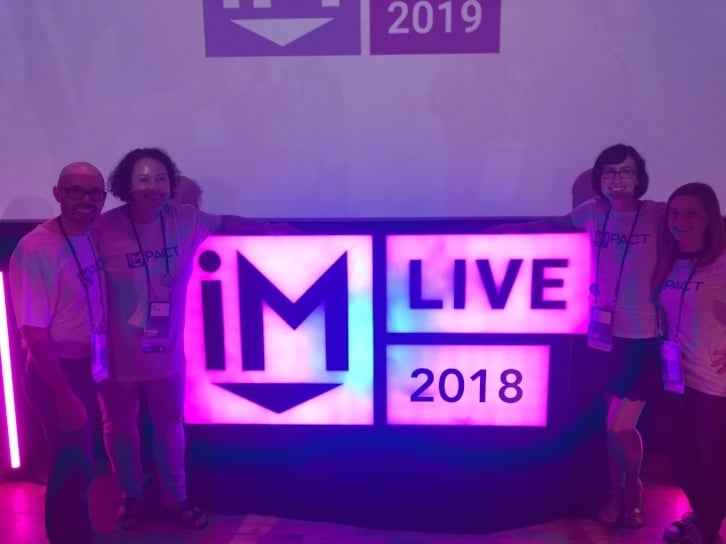 An Email, a Keynote, an Introduction -- Each Moment Leading to the Next...

Sending that one email led to my business for 14 years. Hearing Gary’s talk at INBOUND inspired me to build a specialized business that is great at Facebook Ads. And I am honored to say that figuratively -- and literally -- Bob has had the biggest IMPACT on my life by recognizing what we had built and trusting us to become part of his family.

What does this mean for you all of you?

Well, as a reader, client, or follower of IMPACT, I’m excited to share some of my favorite Facebook Ads tips, trends, and strategies with you.  Ask me questions—I’m glad to answer!

And as a marketer, I challenge you to be aware. Show gratitude. Be inspired. And be open.

The future is what you make of it -- but only if you’re willing to “Face Everything and Rise” to the occasion.