What People Hate Most About Your Sales Emails 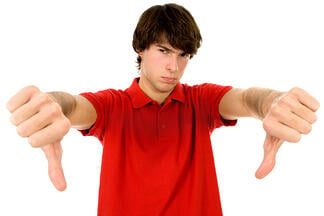 What does the response rate look like for your sales emails?

Is your sales team even giving prospects a reason to respond?

The emails they're sending out not only need to catch the attention of your prospects, but also encourage them to engage further.

Unfortunately, most sales emails don't do a whole lot of either. Rather, they rely on unwanted pitches and assumptions as an inadequate means of persuasion.

So to help your sales people connect with prospects in a more valuable way, we've outlined 5 things they have to stop doing right now.

Mass sales emails often reek of assumptions because they're designed to speak to a large group with little to no context.

When in reality, your emails should be carefully crafted based on what persona the prospect falls under, the actions they've taken on your website, or the pain points they've admitted to struggling with.

Before you jump to the conclusion that they need more traffic or a new content strategy, take the time to understand where their current strengths and weaknesses lie. This while help you provide a more personalized offering that is rooted in reality, rather than theory.

Additionally, email segmentation serves as a valuable resource to help sales teams avoid this type of suppositive outreach. Rather than blast a generic email out to everyone, they can slice and dice the list to ensure that people who downloaded X receive a relevant follow up, and people who filled out form Y receive something that aligns with their request just the same.

If your sales team is falling back on clichés in an attempt to convey their message, they're essentially saying nothing at all.

They're trite, empty, and ineffective.

To be clear on what I'm referring to here, let's take a look at the top 10 sales clichés to avoid according to Inc:

You see, the trouble with these clichés and others like them is that they've been beaten to a pulp already.

Your email recipients have heard these go-to phrases time and time again, to the point where they've lost their ability to influence anything, let alone a sale.

One of the biggest mistakes salespeople make is failing to recognize that sales is a process.

Skipping steps will result in a lack of adequate information necessary to ensure a successful sale.

Last week our CEO brought this sales email he received to my attention: 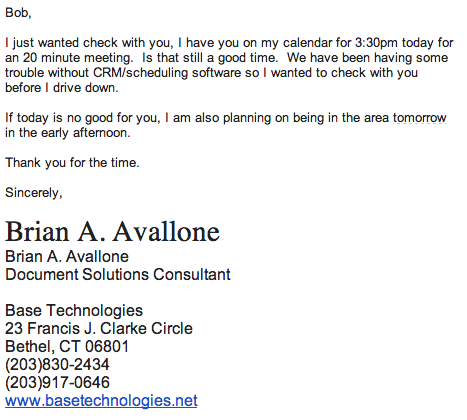 He didn't know this person, what his company did, or why he was reaching out. He was essentially a perfect stranger who was so insistent on stopping by our office that he went as far as scheduling calendar events in attempt to invite himself in.

Talk about too much, too soon.

It's important for salespeople to understand that sales are earned through careful listening and effective communication, not just one pushy email.

Every aspect of your email communication should be professional, right down to the formatting.

If your sales team isn't careful in their selection, something as small as font style can ruin their shot at resonating.

For example, using a font like Comic Sans is going to diminish your business' credibility instantly. Comic Sans isn't just disliked, it's famously disliked. So much so that the font's creator, Vincent Connare once tweeted: "Comic Sans is the best joke I ever told."

To prevent this, they should commit to a font like Ariel, Helvetica, or Verdana. These options work best for web communications because they are minimalist and easy to read.

In addition, you'll want to be sure that your salespeople avoid different colors or the use of excessive capitalization. This will make the email appear amateur.

You want your sales emails to be remembered for being remarkable, not for poor spelling and grammar.

While we're all human, small mistakes or inconsistencies in your email content have the ability to negatively represent your business.

When competing for time and attention in a crowded inbox, your sales team has to be committed to delivering a polished message above all else.

Check out this email one of our inbound marketing consultants received: 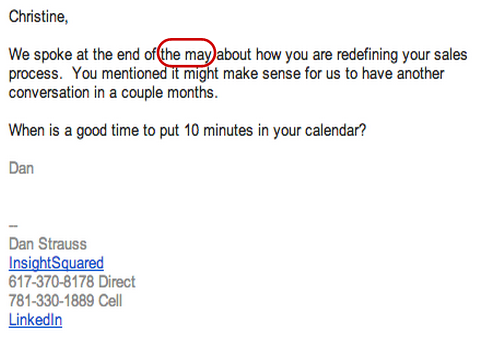 The may? And May is lowercase?

While the error is small, it serves as a representation of the standard of quality that they hold themselves to.

To avoid your sales team falling into the same trap, be sure that they have a plan for reviewing their emails before they send them out.

Sales and Marketing Alignment: How To Shorten Your Sales Cycle

The best sales enablement tools for your team in 2021

Your buyers want to control the sales process; here’s how to let them