When exactly was the last time Twitter made a major design/feature update to the platform?

Maybe a year ago?

Well, that’s no longer the case.

Twitter recently announced their new beta app in an effort to help the platform stay valuable and relevant, especially in an era where consumers are constantly changing their behaviors and needs.

In their newest beta, Twitter is releasing a standalone app where select users, roughly a thousand participants are able to explore the new features such as color-coded replies,  algorithmically sorted replies, and status updates.

Unlike Twitter’s Experiments Program, the participants in this beta aren’t being asked to sign an NDA -- allowing the entire Twitter community to comment and ask questions about the features introduced in the beta. In fact, they’re being encouraged to talk about the features.

Do you remember Instagram’s update to their feed? The one where you had to scroll to the left and right rather an up and down?

If not, that’s probably because it was only live for maybe an hour due to negative user feedback.

According to Sara Haider, Twitter’s Director of Product Management, “Twitter believes that changes shouldn’t be dropped on users one day” randomly.

Through their beta app, Twitter hopes to prevent design mistakes like Instagram and uncover any issues they may have overlooked. They also hope it will allow them to harness viral development in a more focused way.

A big reason behind the beta and changes being made by Twitter is the decline in users.

While daily users are growing, Twitter is finding that monthly active global users have either flattened or declined.

Despite a 2% growth in the last four quarters, in their key market (United States), there has been a decline in the last three quarters.

According to Twitter’s Co-Founder Jack Dorsey, he believes the app should focus not only on the people and companies you follow but also the things you’re interested in.

With that being said, let’s take a closer look at the features you’ll find in the beta app.

In the beta, Twitter will be testing out color-coded replies that focus on a new design for conversation threads -- including a color scheme and visual clues. (We heard rumblings of this a few months ago.)

This feature is similar to the messages app on your smartphone with colors being used to distinguish between responses from the person posting the tweet, your posts, people you follow, and non-followers. 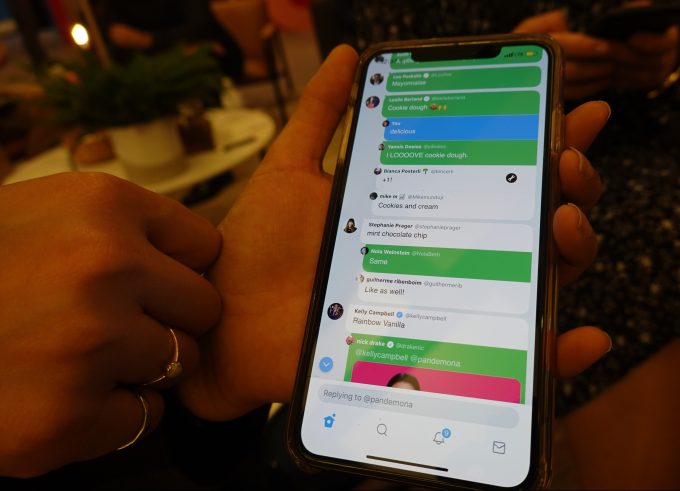 Also, when you click into a conversation thread within the beta app, Twitter will be able to offer visual clues to help you easily find the parts of the thread you’d be interested in.

If you’ve been using Twitter for a long time, you’ve probably come up with a hack or two to compensate for features the platform doesn’t offer.

Taking those hacks into consideration, the same algorithm Twitter uses for your newsfeed might make its way to your replies.

Implementing this feature will make it easier for users to follow conversations and identify the “most important” points.

Jack Dorsey had these thoughts about the change,”The buzz, that feeling and that vibe of live activity is something we never want to lose. Not everyone will be in the moment at the exact same time, but when you are, it’s an electrifying feeling …. Anything we can do to make a feeling of something much larger than yourself we should.”

Twitter is still trying to determine what they’re going to do regarding engagement icons to help streamline the look of replies.

In fact, within the beta app, there is one version where they didn’t include the heart icon. Surprisingly, this is something Twitter has been contemplating for a while. It’s believed that removing the heart icon will be able to improve the quality of debate in conversations.

In addition to the three features mentioned above, there are two other features Twitter is also considering testing. The first one is icebreakers which would be pinned tweets that are designed to start conversations with followers.

The other feature they’re considering is a status update field that would allow you to display your location, availability, as well as what you’re doing.

Similar to setting a status in Slack or even instant messenger.

If you’re a marketer for a product or software, following Twitter’s lead with a separate beta app is a great way to introduce potential changes to your users without flipping the switch one day with a new design, new features or even workflow.

You would also be able to use the testing period to gain feedback from users that will allow you to adjust features and designs to update a product your users will rave about. We all know how important feedback is, and there’s nothing worse than releasing an update that makes your users job or task harder.

What are your thoughts on Twitter’s release of a separate beta app? Let me know in IMPACT Elite.

Twitter's Desktop Gets a Much Needed Redesign