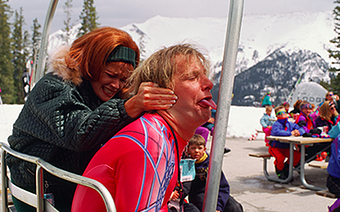 You know when you were little and your friend told you to stick your tongue to a cold pole at recess? That was bad advice.

Remember that time your mom convinced you that a bull cut would be flattering? Looking back on it, you probably shouldn't have taken that advice either (although you didn't have much choice.)

What about that blog article you read last week that said social media was the new SEO? Once again, not the best advice.

While the sticky tongue and bad haircut can be blamed on our naive childhood nature, falling for bad social media advice is a real problem.

With so many "social media experts" out there peddling their ideologies, you have to put a filter in place in order for anything of value to surface.

Weeding through the trenches of unsound social media advice isn't easy, which is why we've detailed 8 tips that you should avoid at all costs.

Facebook, Twitter, LinkedIn, Google+, Snapchat, Instagram, and Vine are just handful of the social networks that are in existence today. From a business standpoint, if you're trying to develop a quality presence on every single social network out there, you're not a "Jack of all trades", you're probably just overwhelmed.

With new social networks popping up left and right, the pressure to keep up hits hard. But that's just the thing, just because a new network surfaces doesn't mean that it's right for you.

Social media automation isn't the enemy. In fact, its a lifesaver for many busy marketers who find that sometimes there's simply not enough hours in the day.

However, the trouble with automation arises when these busy marketers take it too far. Before they know it, they're mindlessly pushing out generic posts and tweets with no meaning attached.

The key is to utilize automation, but don't give it the reigns. You don't want to give off the impression that you're just here because you have to be, you want them to know that you're looking to provide value, learn new things, and engage.

Blasting out automated posts doesn't translate into social media marketing. You must join the conversation, interact with people, and post things with relevance in order for your efforts to sustain anything.

Ride the Wave of Popular Hashtags

Contrary to what you've been told, feeding off the popularity of a trending hashtag isn't the solution to all you problems.

Brands that jump on a hashtag bandwagon that contains little to no relevance to their brand are actually diluting their message, and ultimately attracting the wrong audience.

When Habitat, a contemporary furniture company, blasted out this promotional tweet about their new Spring collection, the #iPhone they snuck in there didn't go unnoticed:

Point being, stick to hashtags that pertain to your industry or message. It's that simple.

Let Anyone Manage Your Accounts

Your social media accounts shouldn't be placed into the hands of just anyone. Before you set the new intern up with the passwords to all of your accounts you have to be sure that they understand your plan for posting.

Your social media presence needs to align with your intended tone, your goals, and your objectives. Unless the person behind the 140 characters is well-versed in all of these things, it's likely that they're not ready to take on that type of responsibility.

Mismatched tone, oddball posts, and irrelevant information will leave your audience feeling not only confused, but it's likely that they'll begin to doubt your credibility as a result.

It's All About Followers

Before you go adding and following everyone and their mother on your social media accounts, think again.

Getting your numbers up doesn't mean you're doing it right. In fact, there are a handful of other social media KPIs that are actually much more important than your following. What about traffic data, comments, and shares?

While we're aware that a larger following translates to a larger reach which ultimately increases the potential that your message actually gets heard, you wan't to be sure your voice is falling on the right ears.

A smaller, more targeted following will get your further than a massive, diluted following.

Everybody makes mistakes, however mistakes made on social media usually don't go unnoticed. Sure you can delete what you've posted, but you can't guarantee that no one has already spotted it.

While the delete button solves the out of sight aspect, the residual effects often make it difficult to place the incident out of mind. Point being, deleting the post doesn't solve the problem, which is why it is important to have a plan for damage control.

Check out how the Red Cross handled their social media blunder: 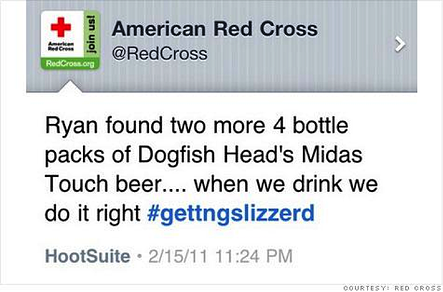 While we understand that you have a lot of awesome things to contribute, so does everyone else.

Your social media accounts aren't very social if your focus is strictly on you, your brand, and your content, right?

If you find an article that you think would resonate with your audience, don't avoid sharing it simply because you didn't write it. Share the wealth. Often times you'll find that once you start sharing posts from other people, they'll return the favor.

If you can get people to share your content, you're now looking at an opportunity to reach a new untapped audience.

If there is anything you take away from this list, let it be this. Have.a.plan.for.posting.

Posting to social media just for the sake of saying you did it means nothing. If you truly want to unlock the value of social media, you have to understand why you're there and what you want to take away from it.

Laying out a strategy will not only help you to define the purpose of the content you're putting forth, but it will also help you align your topics and formats. This is particularly important when it comes to social media because each channel calls for a different type of language, presentation, and interaction.