Back in 2018, Apple released a feature for iOS and iPad OS called “Quick Look,” which allowed users to see certain products directly in their room. The feature created an instant augmented reality (AR) experience within apps that users already had on their phones like Safari, iMessage, and more.

To use this feature all users needed to do is look for Apple’s AR badge in the corner of web images, shown in the example below from TapSmart. When they clicked on the badge they were able to place the given object anywhere in a room.

This really gave users a feel for exactly what the product would look like before purchasing.

Quick Look was well received by retailers like Home Depot, Magnolia, and Wayfair. Since Apple’s recently-announced update, other large retail companies have been quick to add these customizable buttons to their websites.

While AR isn’t widely used by all retailers, it is being tested by other large tech firms and social media platforms.

Apple is one of the companies leading the charge on making AR more available, and there’s hope that it will become a more familiar thing to consumers, especially from those like Moments, an AR company helping create smarter homes.

If AR becomes more widely accepted by users, it could really help retailers break down huge barriers when it comes to online shopping.

E-commerce companies will be able to give consumers direct insight into how certain products will look, feel, and even act in their space, which helps increase sales and lessen returns for products.

For instance, users of Houzz’s AR tool were 11 times more likely to make a purchase, and Build.com found that people who bought a product via AR were 22% less likely to return that item.

Last week, Apple announced that it will be rolling out more support for Quick Look, and that it has also added a feature allowing users to purchase directly from the AR preview.

This update will allow developers to add a purchase button (that will open up Apple Pay), or to use a support window to chat with customers.

Besides making purchases and opening a chat window, retailers will have a lot of customizable options to make the button lead users to wherever they would like on their site. For example, if a retailer wanted a user to view all of the color options for the specific product they’re viewing in AR, a button can lead them directly to the page that showcases all of the options available.

Apple is also rolling out some additional support for spatial audio so that the 3D models of speakers or other noise-making devices can actually make noise in the room you’re viewing it in.

Retailers will be able to showcase not only how great their speaker system will look in your living room, but also how great it will sound.

With these changes Apple is making, more retailers have announced that they will be taking advantage of the new Quick Looks feature.

Just like before, all customers need to do is look for Apple’s AR image in the corner, and from there they can view a product in their room — and then easily complete the action that retailers want them to complete.

In this example from TechCrunch HomeDepot is directing the user to chat with support and ask questions about the product itself, availability, and delivery options. 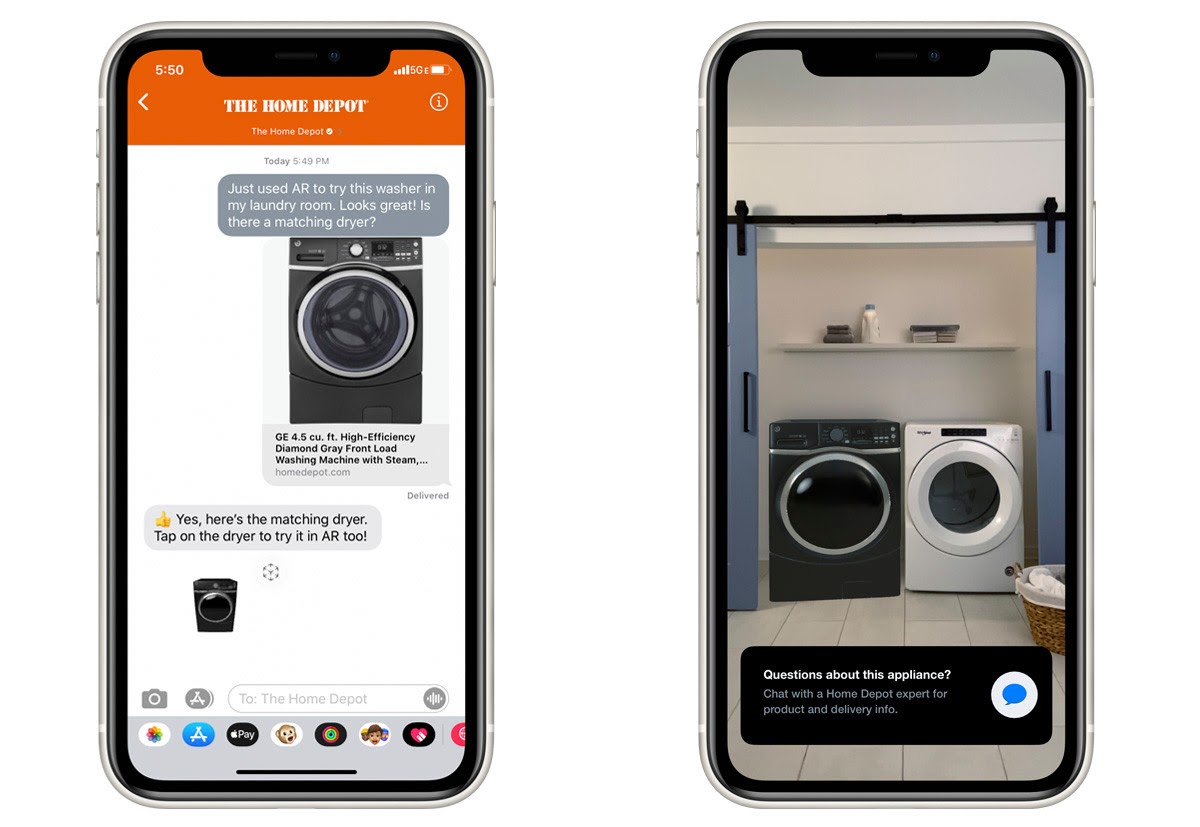 AR clearly makes the experience for the user even easier. If they like the way the product looks, all they need to do is swipe up to take the next action. The consumer no longer needs to search for their wallet or go through the sometimes tedious checkout process.

And with this being such an easy process for users, retailers will be able to hone-in on creating a great user experience, which in turn should increase sales for their company.

What does AR mean for marketing?

It’s clear to see that there are benefits to using these new types of AR features; it’s a great way to get your products visually in front of potential buyers.

If they’re able to see your item directly in their space, the chances of them making a more expensive purchase are increased by 40%. Then, if all they need to do is swipe up to buy, you’re likely to see increased sales.

With the user experience moving towards AR tools, it’s smart to hop on the bandwagon, or at least do some more research to see if it makes sense for your company.

To get started, retailers need to provide a 3D model of their product to Apple and then Apple will use its ARKit to render it into the real world. From there, Apple will make sure everything looks right, from the scale of the product to the room lighting and different shadows the product would cast.

Apple’s how-to-guide explains how you can get AR up and running on your site!

What online shoppers want (and how you can provide it) [Infographic]